Amongst our grief, is Brut's anniversary.

6 years ago today I buried my best friend.

Hard to believe it has only been 6 years.

And now Brut is with his girl Silver and their kids,

I hope they are having one hell of a celebration up there. Posted by 24 Paws of Love at June 18, 2021 1 comment:
Email ThisBlogThis!Share to TwitterShare to FacebookShare to Pinterest
Labels: Brut, death anniversary of a dog

And then there was one... 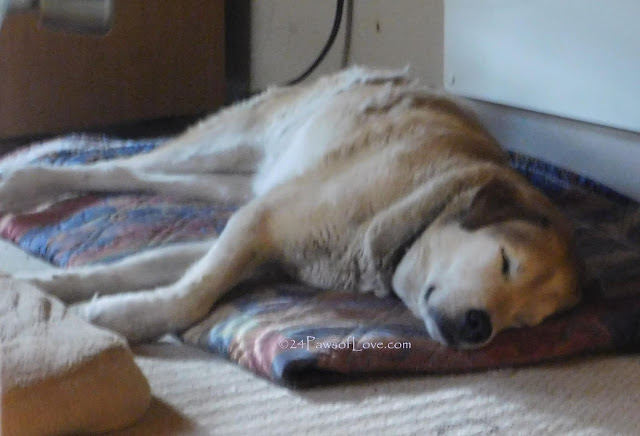 I don't know if I am ready to share about how Zappa is doing.  Being that he is the loan survivor of the 24 Paws of Love, I'm feeling very protective and quiet about him.  (Other than the fact of grieving the loss of three dogs)

It was touch and go there for a while.  Not critical, but he was having a rough time.

He had the basic symptoms as we had.  Not wanting to eat, sleeping more, isolating, depression and sadness.  The first two weeks were the most important.  We are still keeping an eye on him and it has been 4 weeks.  It has been a huge adjustment for everyone. (including the cats)  I wish I had better answers for all the WHY'S out there, but I don't, so we are coping the best we can.

It's difficult when Zappa doesn't want the attention.  He's very independent and hates to be fussed over.  (Like all the dogs were)  So it is difficult to grieve with him, without touching him in some way  (or is that just for us?)  Maybe a kiss or a quick hug, but that's about it.  There's no cuddling or snuggling with him.  And most of the time there is little to be said.  (for me anyways)  I'm still learning to communicate with him as he has always been a challenge.

So, we just take care of each other the best way we know how as we go through this loss together.  Because everything changed for all of us and all we have each other.  ♥