The pain of walking without a dog

There is nothing worse than walking alone, especially without your best friends.  I have barely taken any walks since Chance, Blaze and Fiona died.  And while I walk with Zappa, when he could walk, the walks were very short and slow.  Just the facts of walking with an elderly dog.

Every day I'd wake up and say I was going to take myself for a walk and almost every day I failed.  I just couldn't bare the thought of going alone without my protectors.  It started to become unbearable when my body would revolt against me.  All of this pent up anxiety and energy I had gave me torturing leg cramps to the point I was standing up while watching our evening show.  I couldn't relax and the only other thing that made it tolerable was laying down.  Most of the time all this tension was at night, but there were times during the day when my legs would act up.

I didn't know.  But this past month the pain was so intolerable,  I had my coat on and was out the door before I could stop myself or even realize what I was doing.  I walked to the corner and back.  I had finally done it...walked without a physical dog.  Down the road, out in the open for anyone to see me.  Walking alone, with my self consciousness flaring like a beacon and still I walked on.  All the way to the corner, where I did a 180° turn and came back with my breathing starting to slow as the fear and stress released from my body one step at a time.

Now I'm walking on a regular basis.  All I have to do is remember how bad my legs get at night and I am pushing myself to do it.  It is a good feeling.  I don't like walking without a dog, I never will, but for now that is what I must do.  I know the dogs are there in spirit, but for the most part this is my own personal battle between me and myself.  Maybe I will never get over my insecurities, but I will be stronger for the next dog, because I had the blessings of walking with Chance, Blaze, Fiona, Brut and Silver who all gave me something to grasp to...themselves.

I just look better and feel better with a dog next to me.  :)

Posted by 24 Paws of Love at January 23, 2023 No comments:
Email ThisBlogThis!Share to TwitterShare to FacebookShare to Pinterest
Labels: dog walk problems, walks

I think I'm in the final phases of accepting the loss of Chance, Blaze and Fiona.  It struck me on and off throughout last summer, fall and this winter that it is just us three, Mark, Zappa and I.  And the closer the three of us bond the more apparent it is.  Our pack has gotten stronger and stronger, in ways I would have never thought possible.  I don't even know if I can explain it, but Zappa is like having all the dogs put together in him.  We are tighter than we have ever been and we are living and breathing on that strength.  A bond I would have never thought could happen, between Zappa and I, is happening.

And I still can't believe it! 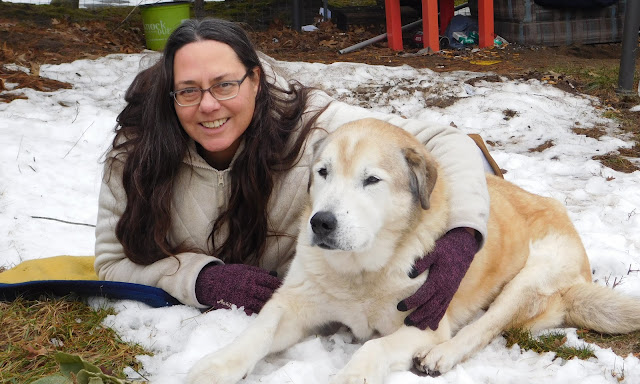 Posted by 24 Paws of Love at January 20, 2023 No comments:
Email ThisBlogThis!Share to TwitterShare to FacebookShare to Pinterest
Labels: special bonding with dog, Zappa

I've mentioned before that Zappa and I were never very tight.  In fact, he wasn't my favorite out of the bunch.  He was smart enough to get Daddy Dog Brut in trouble when Zappa was the one who started messing with Brut.  He knew exactly how to push Brut's buttons, and then cry for me and I, not seeing what happened, would blame Brut.  Once I caught on, I didn't care for Zappa or his antics.  Brut was my dog and Zappa was too smart for his own good.  To top it off, Zappa was hubby, Mark's dog.  So, even though I loved him, there was always a riff between Zappa and I.

Rewind to almost 2 years ago when the Chance, Blaze and Fiona died:

Things were pretty rough.  We had just lost Chance 3 days before and it was our first day after Fiona died.  All our emotions were raw.  My lunches were always spent with the Front Dogs (Chance and Blaze) since their headquarters were in the kitchen.  And here I was sitting with this stranger of a dog all alone on the back porch and I didn't know what to do.  Maybe Zappa would like to share my sandwich.  So I ran in, fixed lunch, and offered him some turkey.

For that moment, we were OK. 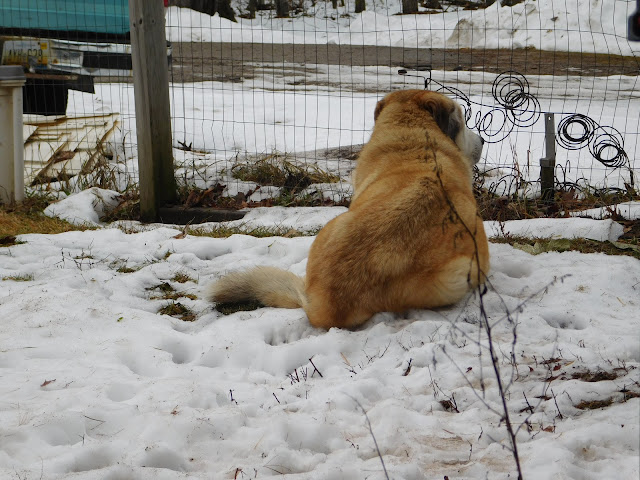 Posted by 24 Paws of Love at January 16, 2023 No comments:
Email ThisBlogThis!Share to TwitterShare to FacebookShare to Pinterest
Labels: dog- human bond, special bonding with dog, Zappa 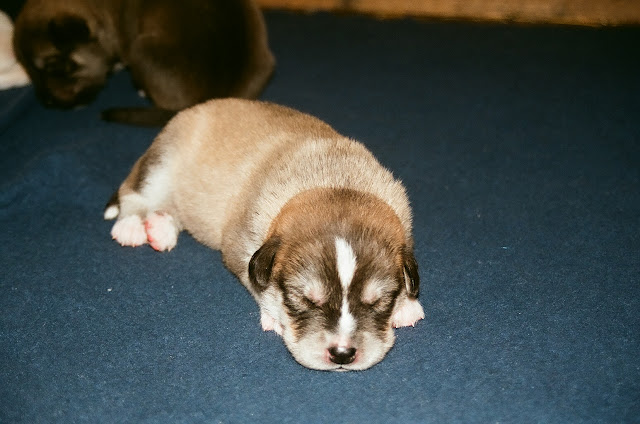 15 years ago, on a cold, snowy night, I followed Silver again outside to go "potty" at 2:30 am in the deep snow, when this large, grey bubble came out.  After confirming it wasn't a puppy, I realized her water broke and we ran back in the house to wake hubby, Mark...they were coming.

At 2:50 am, on January 2nd, 2008, a reddish-brown Husky-looking puppy was born.  We named him Zappa and there was no doubt, we were keeping him.  Zappa was the first one of the train of puppies that were to be born that night.  A total of ten, to be exact.  It was Zappa who got the ball rolling.

Zappa was a momma's boy from the start.  He fought for the top dog position with Chance, as well as feeding position.  Chance and Zappa also went head to head for top weight.  Chance usually won all three.  Zappa hung out tight with the other Husky-looking dogs, Grumpy and Blaze.  And he was adorned by Mark.  Out of all the puppies, Zappa was the only one Mark really knew for sure.  He couldn't keep them all straight.  lol

It is 38 degrees out, there are snow spots on the lawn and Zappa may be the last remaining puppy from the Power of Ten litter.  Besides our three, Chance, Blaze and Fiona that are gone, we know positively of three more (Grumpy, Angel, and Jack) are also gone.  More than likely, the other three are gone as well.

And that makes Zappa's 15th birthday a pretty big deal.  The fact that he's here to celebrate is a miracle.  After Chance, Blaze and Fiona died, it was touch and go for a while and we didn't know if he was going to make it or not, but Zappa's still here!  We are making the most of each day with him.

So I want to wish a Happy Birthday to Zappa and the miracle he is 15 years later. 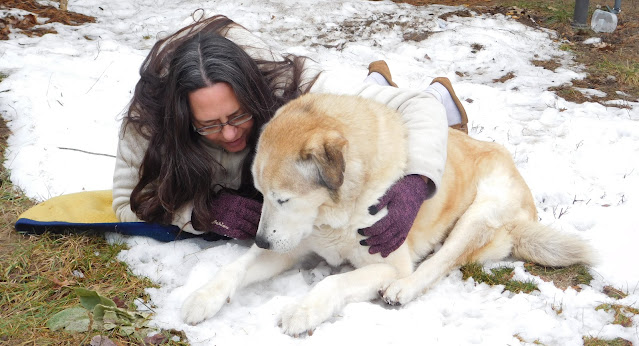 Also, Happy Birthday to the Power of Ten litter.  They changed our lives forever. 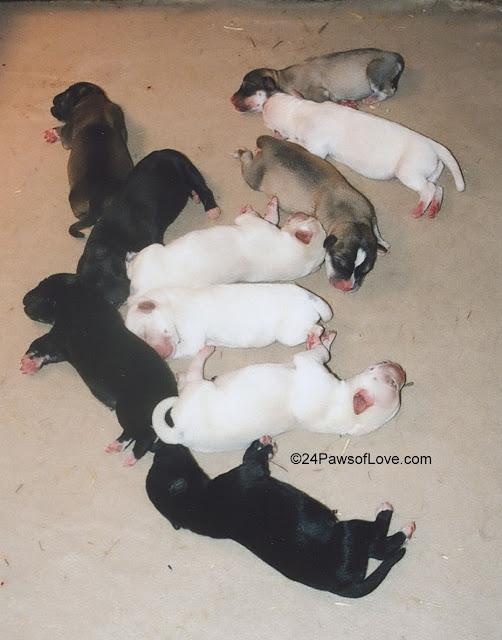