Update on Chance and Blaze post-fight

Since posting about the fight with Chance and Blaze and how they are being cautious with each other, they seem to be reconciling.  They are improving with each other every day.  They are hanging out in the same rooms and standing close for treats.  It has been a good week after the hard dog fight they had.  We are so happy.

Here's something has given me something to chew on:  While talking to the vet about the fight, how they didn't stop, the length of it and how I had to really scream to get their attention; she said that Chance and Blaze could be responding to my screaming as if I was saying it was wrong for them to be together.  I've been pondering the information this evening and I can see that in the dogs actions that the vet could be right.

For example:  I was eating a carrot.  Both dogs in front of me.  But after giving Blaze a bite, she left, letting Chance get the rest of the treat.  Blaze. Never. Leaves. If Food Is Present.  Never.

So maybe what our vet said was true.  And that it is up to me to bring them together and let them know it is OK for them to be together.

Any thoughts?
Posted by 24 Paws of Love at November 30, 2018 4 comments:
Email ThisBlogThis!Share to TwitterShare to FacebookShare to Pinterest
Labels: Blaze, Chance, dog fights

About a week before Thanksgiving... 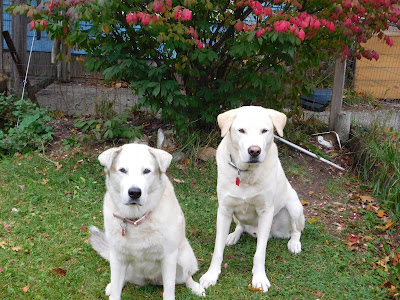 In almost eleven years I can probably count on one hand or so how many times Chance and Blaze have ever gotten into a fight.  And it is almost always over food.  But something about this time was different.  Because they didn't stop fighting when I called their names, like they have before.  It was their longest fight they have ever had.  Almost three times as long than any time in the past.  To say they were shook up over it and were both leery with each other, is an understatement.

Chance scratched the white of Blaze's eye.  It was swollen and red and took two days to heal itself.   That was the worst of the physical damage.  But the emotional toll it took, was far beyond the damage of Blaze's eye.

They have kind of stayed away from each other for those two days and were both over respectful with each other.  It scared me a little.  What a difference those extra seconds made for them during that fight.  And to be fair it was kind of my fault.  They were all hyped up for their dinner, everyone was going crazy and then bam!  Suddenly Chance and Blaze were at each other's faces.

By the end of day 3 they were starting to come around to each other, just slightly.  Yet, here at day 11 since the fight, both are still acting scared of the other. 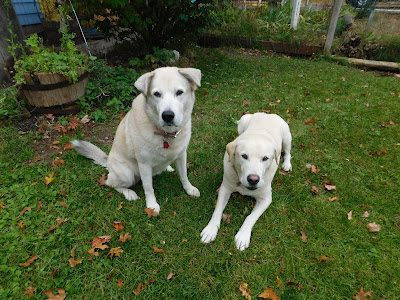 So I don't know what happened differently, other than the fight going on longer than normal, but it's a little scary watching them together.  There's no aggression of any kind, they just seem so cautious with each other and want to stay out of the other's way.

I feel like all the trust that was between them has been shattered in a way I can't understand or make better.  I don't know that there is anything I can do to "fix it" and that it will take Chance and Blaze to heal themselves and each other.  It is going to take time.  I just hope it repairable.  They have always been pretty good together and are fairly close, though not physically, but mentally.  I call them the Dynamic Duo.  It is why they made such good sled dogs, because they are quite the team and work together like a couple of Powerhouses.  There is no doubt that one always knows what the other is thinking, at all times.  So must have come as quite a shock to them when they were battling it out.  An accidental reaction that turned completely out of control.

And if they were unprepared, image how I felt.  Totally out of character for both of them.  I would have not been able to predict that was going to happen, even after all my reviewing of the situation.  I don't think it was the fight itself, but the length of time and not being able to stop them that scared me.  That was not like either of them at all.

So we'll be keeping an eye on them and saying some prayers.  And hopefully they will be able to come back together to be that wonderful team I love.  The Dynamic Duo. 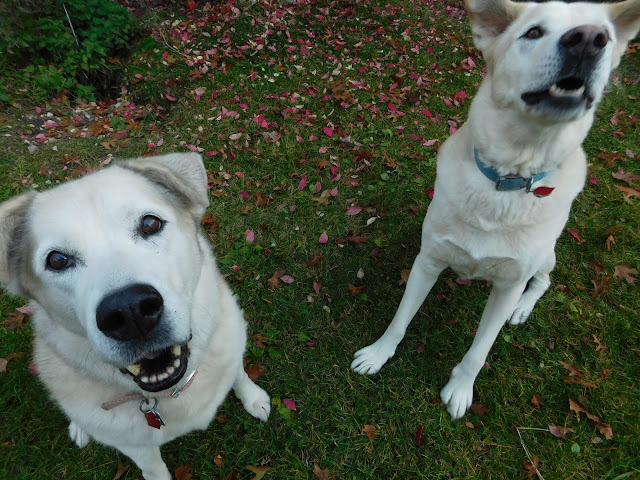 Thursday is the day Brut died.

And today is Thanksgiving.

A day filled with sadness, joy, grief and many memories of thanks.

Posted by 24 Paws of Love at November 22, 2018 No comments:
Email ThisBlogThis!Share to TwitterShare to FacebookShare to Pinterest
Labels: Brut, Brut Thursday, gotcha day

Released fears and Every Day Miracles 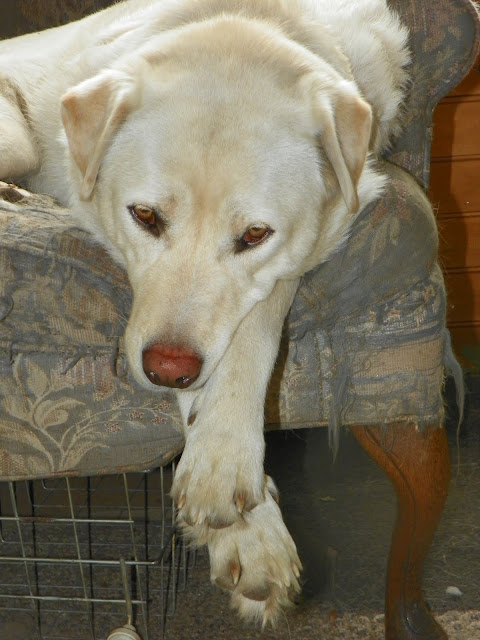 It has almost been a month since we took Fiona to ER and had that terrible scare of vomiting and diarrhea with her.  Instantly we feared the worst, as it felt and looked like a repeat of Brut and Silver's deaths.  I hate that feeling.  Hubby, Mark felt it too.  It tears you to shreds, that fear, of losing everything all over again much too soon.  It is the worst feeling in the world.

It took about three weeks for Fiona to fully recover.  It seemed like forever.  She is now back to eating full meals and is her lovable and conniving self.  I wish I knew what got her so sick.  She ate that rabbit two weeks before she got sick, would it really take that long or did I notice too late?  Regardless, the entire thing was so frightening and unbelievable that Mark and I were wiped out emotionally and physically from the whole experience.

And it isn't like we haven't been through bouts like this before, but having the flashbacks of losing Brut and Silver entangled in it, gives an entirely different element.  I'm not ready to face the inevitable of losing the last four dogs of the family.  I just pray for one more day, every day and do my best to give them a long, healthy life.

All I know for sure, is that every day is a blessing with them.  A complete and total gift from God that these four dogs are part of our living family.  They are our every day miracles.

Front Dogs and the Burning Bush! 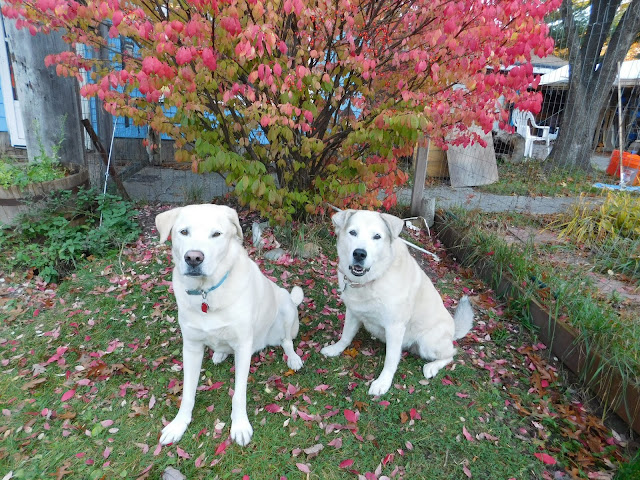 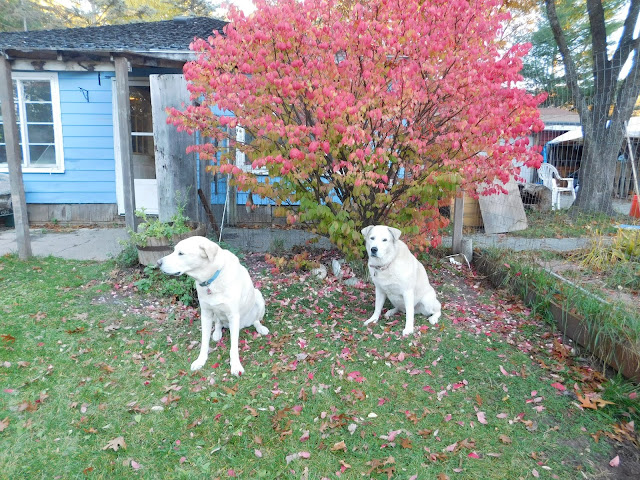 Hope everyone has a great weekend!!
Posted by 24 Paws of Love at November 16, 2018 2 comments:
Email ThisBlogThis!Share to TwitterShare to FacebookShare to Pinterest
Labels: Blaze, burning bush, Chance, Front Dogs

Chance and the UPS man 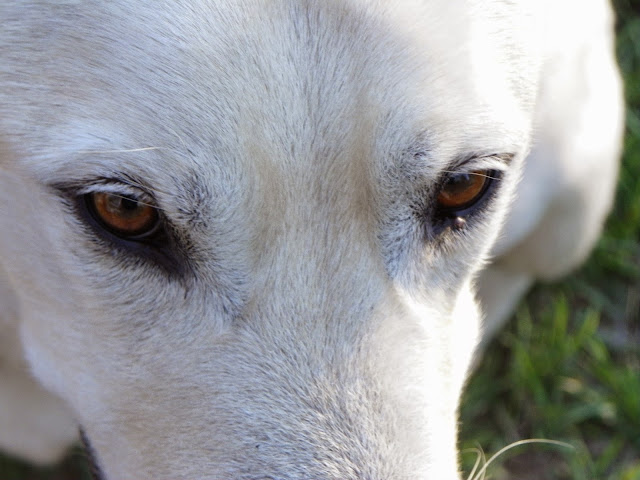 Had an interesting day with Chance.  We were headed out for a walk and I was outside with Chance putting on his harness, when the UPS guy showed up in front of the house.  I thought, "Oh, great.  Chance is outside with me...what am I going to do to control him?"

When suddenly the driver was stuck in the snow trying to turn around in the cul-de-sac.

The light bulb flashed and I started throwing treats in the yard, near the house.

Chance was confused for a few minutes, "What happen to our walk," his face said, but he followed my lead.  Gobbling treats and keeping most of his focus on me.

It was the first time I'd used "Find It," as a diversion in a real life setting and it was working!

When the truck driver finally freed himself and walked up to delivered the package, Chance was by the side of the yard, but wasn't barking or charging.  It was fantastic!

Our First Snowfall Of the Year!

We have about 4 inches of snow that fell on yesterday in what seemed like a mini-blizzard.

Fall isn't even over with yet.  There are still many trees with leaves on them in our area! 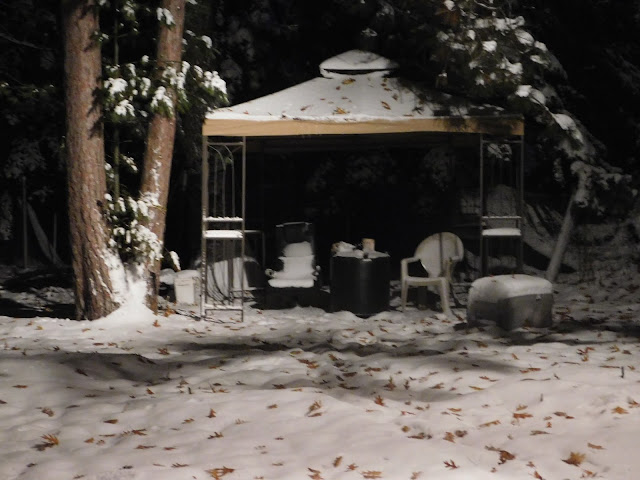 This is the Back Dogs "Dog Talk Time" Canopy, where we spend many days and nights starting our days and catching up at night.  We start as early in the spring as possible, through summer and as late into fall that we can.

The Front Dogs have one as well.  And like every day is with two packs, we visit one side and then the other.  Gotta be fair.  :) 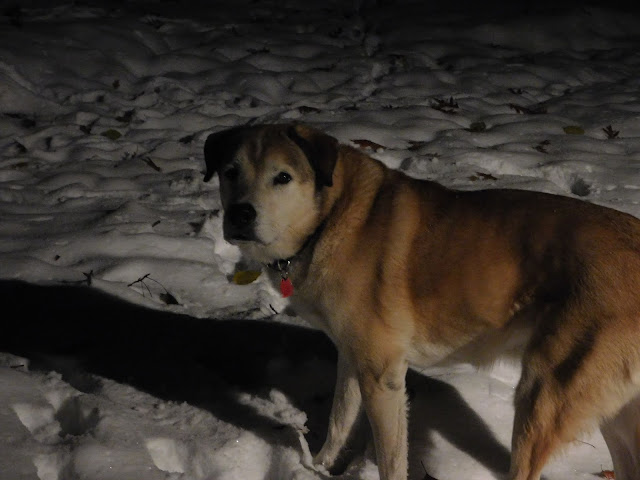 And then there is Zappa who venture out with me tonight to get these snow pics.  He is more concerned with what creatures might be living in the wood shed than me getting his picture.  bol 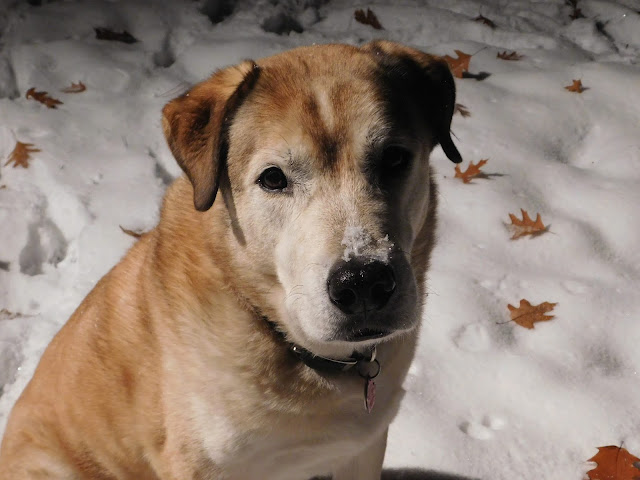 Love this one with the snow on his nose!

He was waiting for his modeling treats that I didn't have. I'm getting that look! 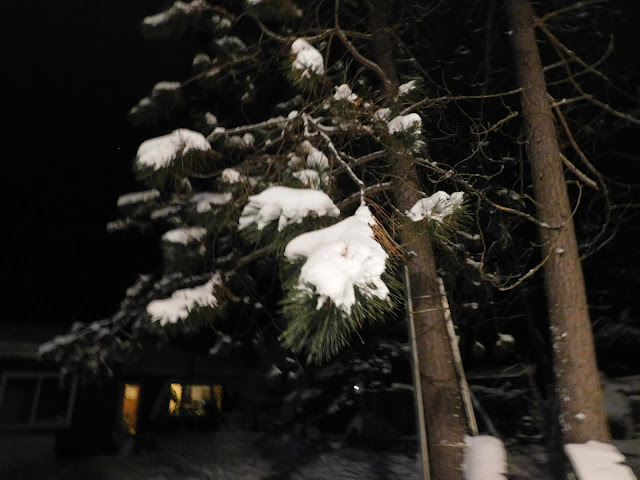 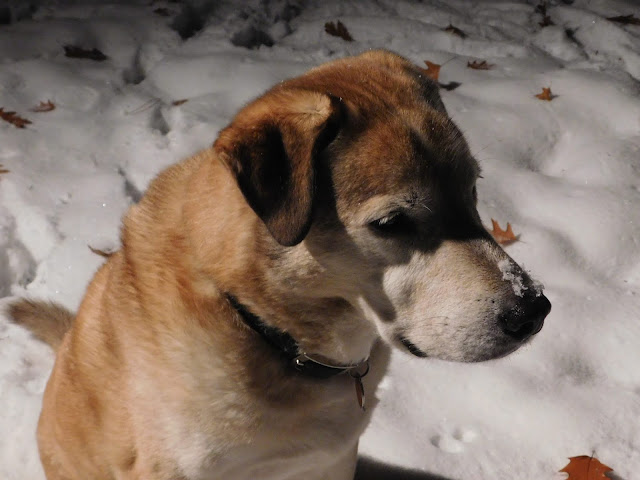 Fiona is doing much, much better.  We think the antibiotic she was taking was making her a little queasy and that may be the reason she was having a hard time eating.  She just took her last one today, so hoping she will get back her to regular food amount.  She needs to gain back those couple of pounds she lost!

Thank you again for the POTP for her!

Posted by 24 Paws of Love at November 11, 2018 2 comments:
Email ThisBlogThis!Share to TwitterShare to FacebookShare to Pinterest
Labels: snow, Zappa 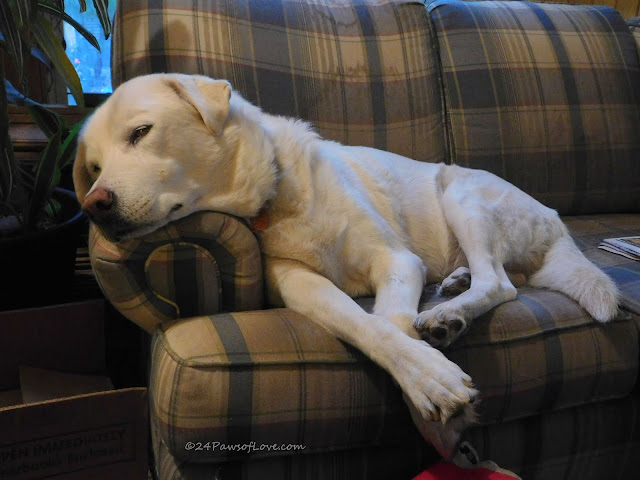 This is how my poor girl looked for the last week.  So tired, weak, and run down.  After 3 different medications from the vet, today was the first day she didn't have diarrhea!  YAY!  And after a week with barely an appetite she was able to have some chicken broth and noodles!  Double YAY!

We still have a little ways to go until we are back to our regular food, but it is a start.

Just how sick was Fiona?  Bad enough that big brother Zappa laid down next to her on the bed at bedtime, something that rarely happens...we were all scared.

And this is my girl today.  Happy, jumping for food, barking at the neighbors dog, and back to her old self.  Couldn't be happier. 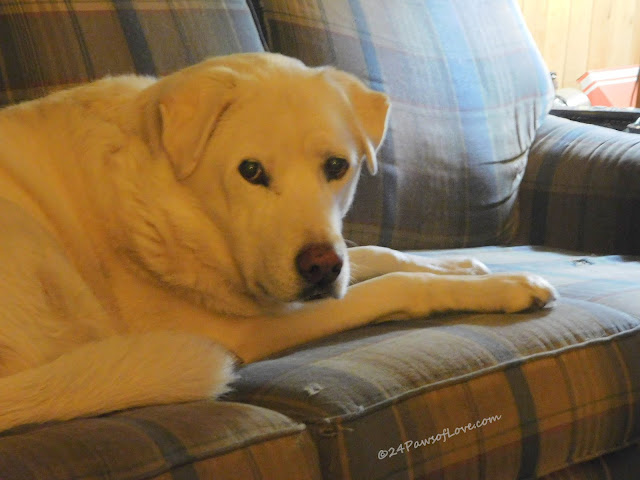 Thank you for your POTP!
It's working!

Our "little" Fiona needs your POTP

It's been almost a week since we took Fiona to ER for vomiting and diarrhea.

She killed and ate half a rabbit about three weeks ago and the vet thinks this is the result that.

We've been to our vet twice for blood work and medicines.  Blood work all checked out, especially her liver levels and the medicine seems to be working to control her symptoms.

But she barely eating.

This is where you come in.  We need some Power of the Paw to help her through.

Please any good thoughts, wishes, energies and prayers, we will take them.

I'm really hope that it is just a slow recovery and not something more serious... 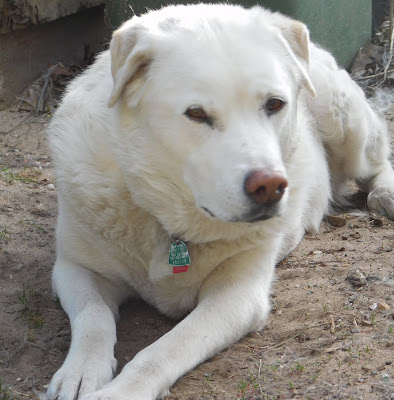