Well I finally did it.  Colors weren't working for me, black, my favorite color wasn't working for me, so I turned the blog white!  UGH!  LOL!  Actually I love the new look it is fresh and clean and gives me what I am looking for to show off the dogs, so I am happy with it.  (That is until I need another change, lol!) 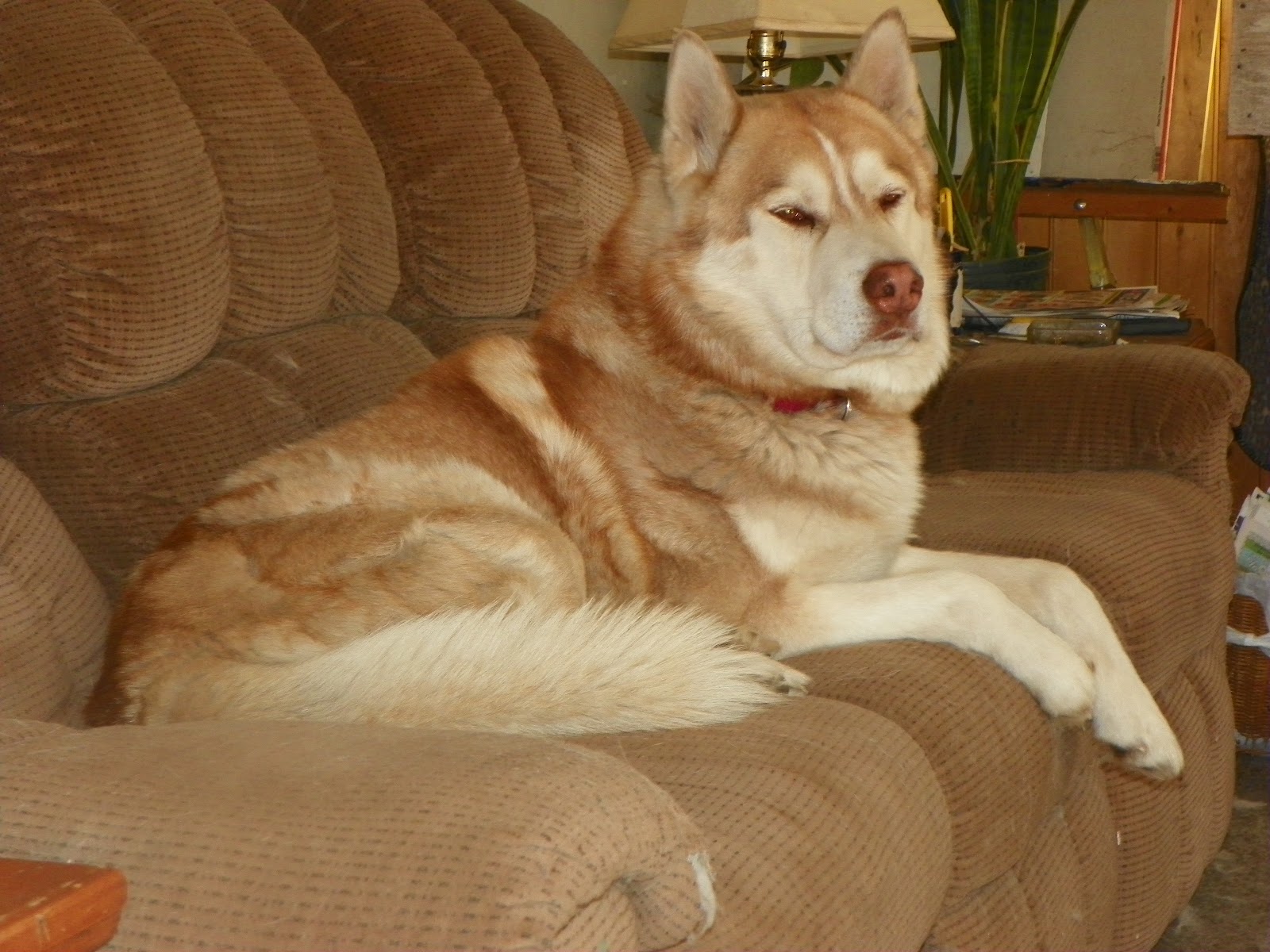 Don't you know who I am?

So how has your week been?  We have been learning to wear a muzzle around here.  Everyone has had a chance to try one on.  Brut has to go to the vet today and is now deemed to wear a muzzle after going after the vet last time he saw her.

Where was my camera Wednesday?

So I'm in the kitchen when I hear my bedroom alarm go off.  And I realize that's why it didn't go off this morning because I set it for pm instead of am.

OH Shit!  Brut!  He hates alarms and I'd already lost a phone because of him.

So I high tail it to the bedroom.

Read more »
Posted by 24 Paws of Love at February 26, 2014 4 comments:
Email ThisBlogThis!Share to TwitterShare to FacebookShare to Pinterest

So how many of you let your dogs and cats in the bathroom with you?  Now come on, don't be shy.

What if I told you that's the place Blaze comes to get her special forehead kisses that soothe her so, while I am seated on the lieu.  Or that Chance gives me sweet kisses on my arms and toes while I bath or when I'm drying off.

Read more »
Posted by 24 Paws of Love at February 25, 2014 8 comments:
Email ThisBlogThis!Share to TwitterShare to FacebookShare to Pinterest

This post is dedicated to My Therapy Dogs who help me live and work towards the person I want to be someday.  No certifications, no therapeutic licenses, just six dogs that are part of my life helping me overcome my personal obstacles, no matter their size. 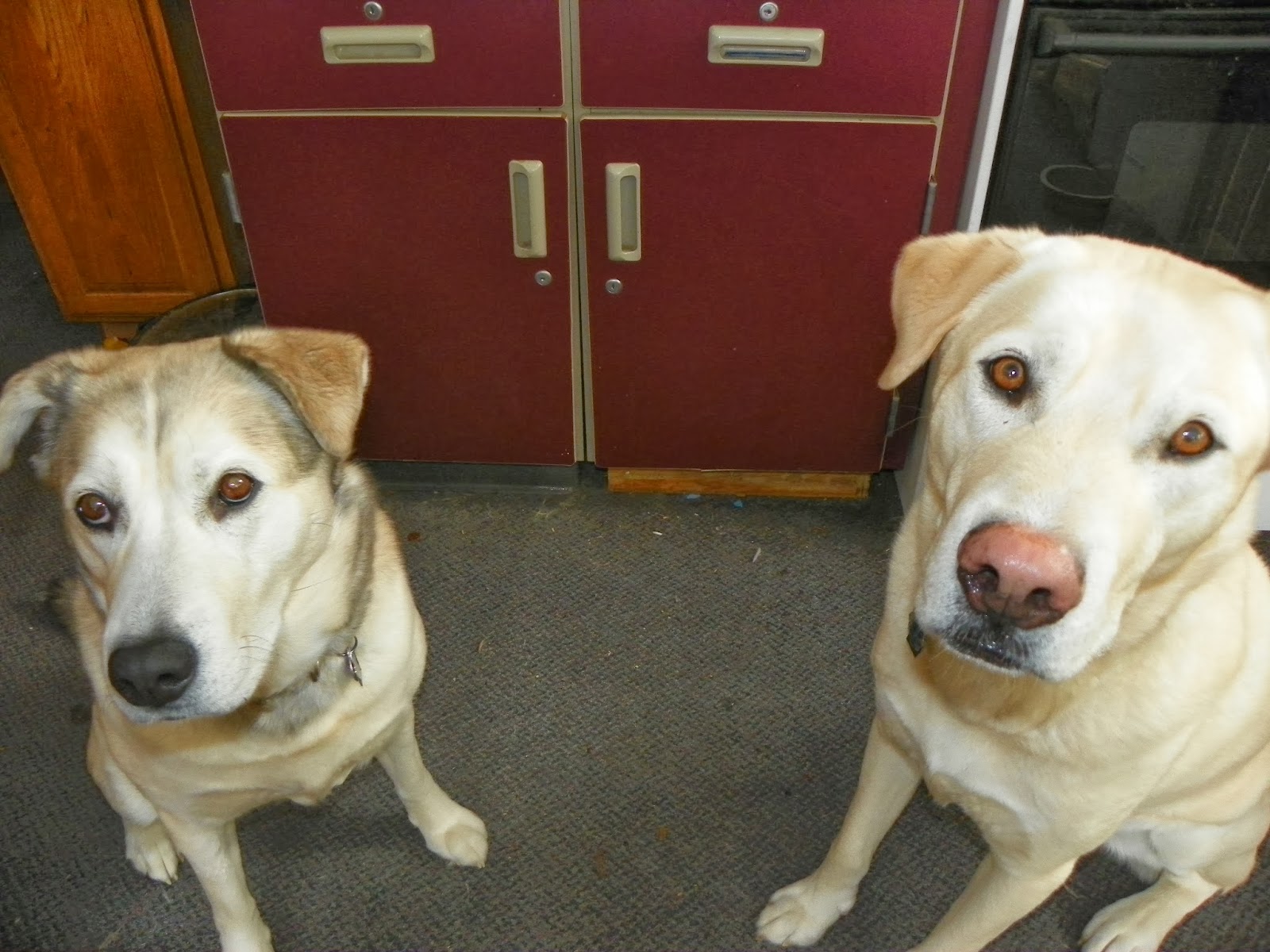 The following story is one those small ones, that has made a world of difference in my life.  Not to mention fun and inviting.  Today my heroes are Chance and Blaze, the Front Dogs.

I know that if you've been reading with us for a while, you may have heard this before.  I still find such a miracle in it, that I am repeating it. 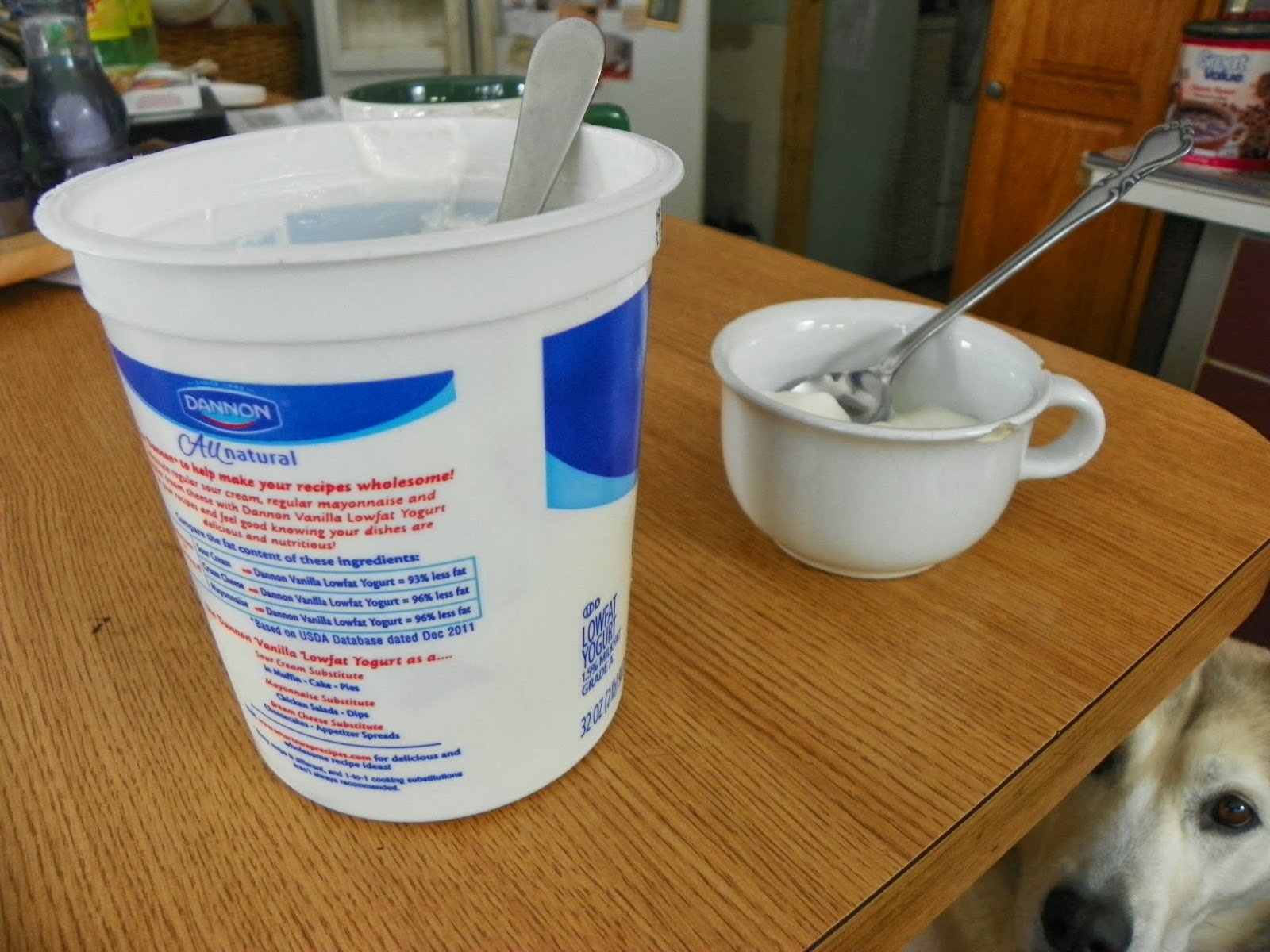 The yogurt
Read more »
Posted by 24 Paws of Love at February 21, 2014 3 comments:
Email ThisBlogThis!Share to TwitterShare to FacebookShare to Pinterest

Wordless Wednesday-King of the Hill 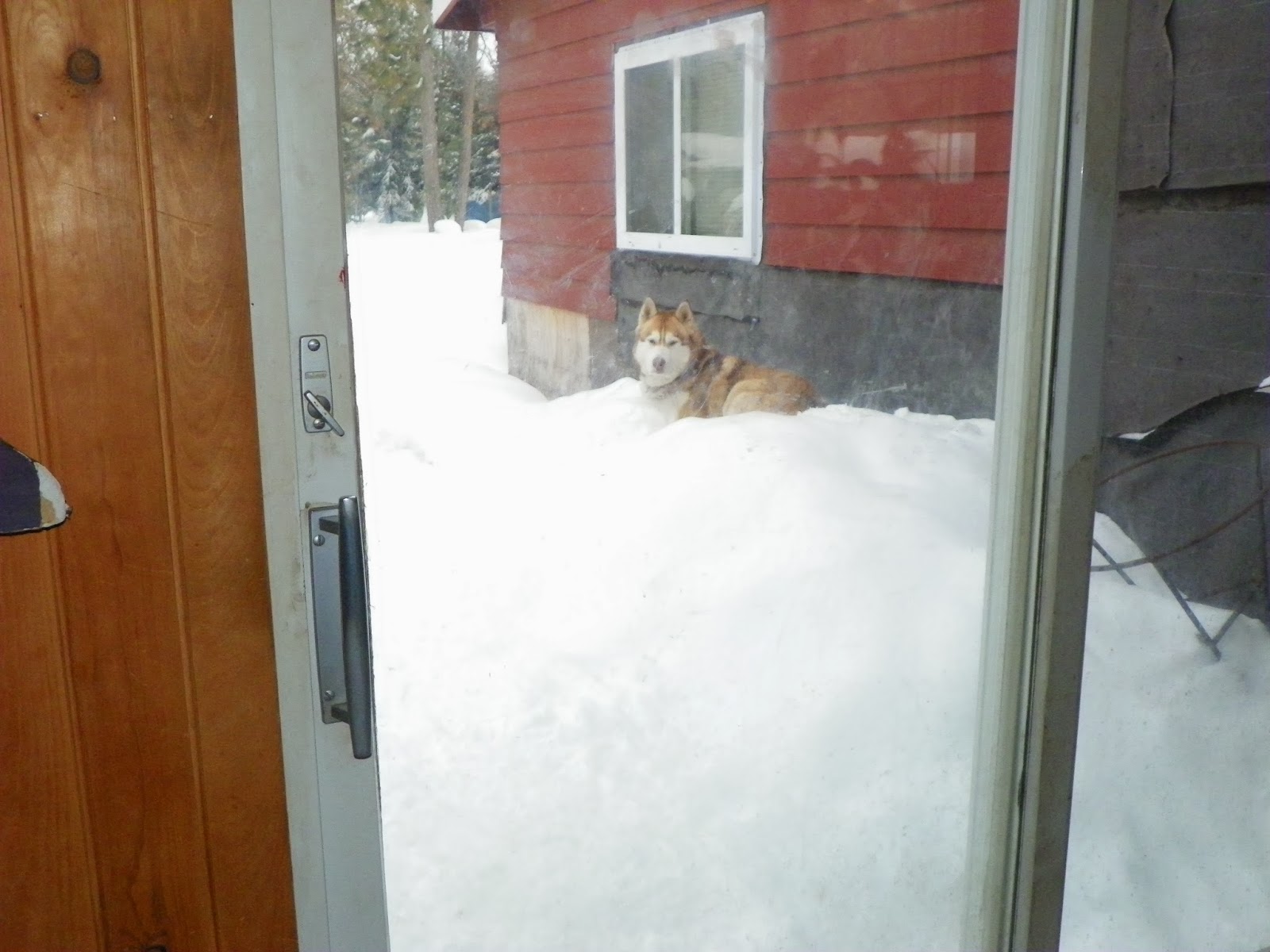 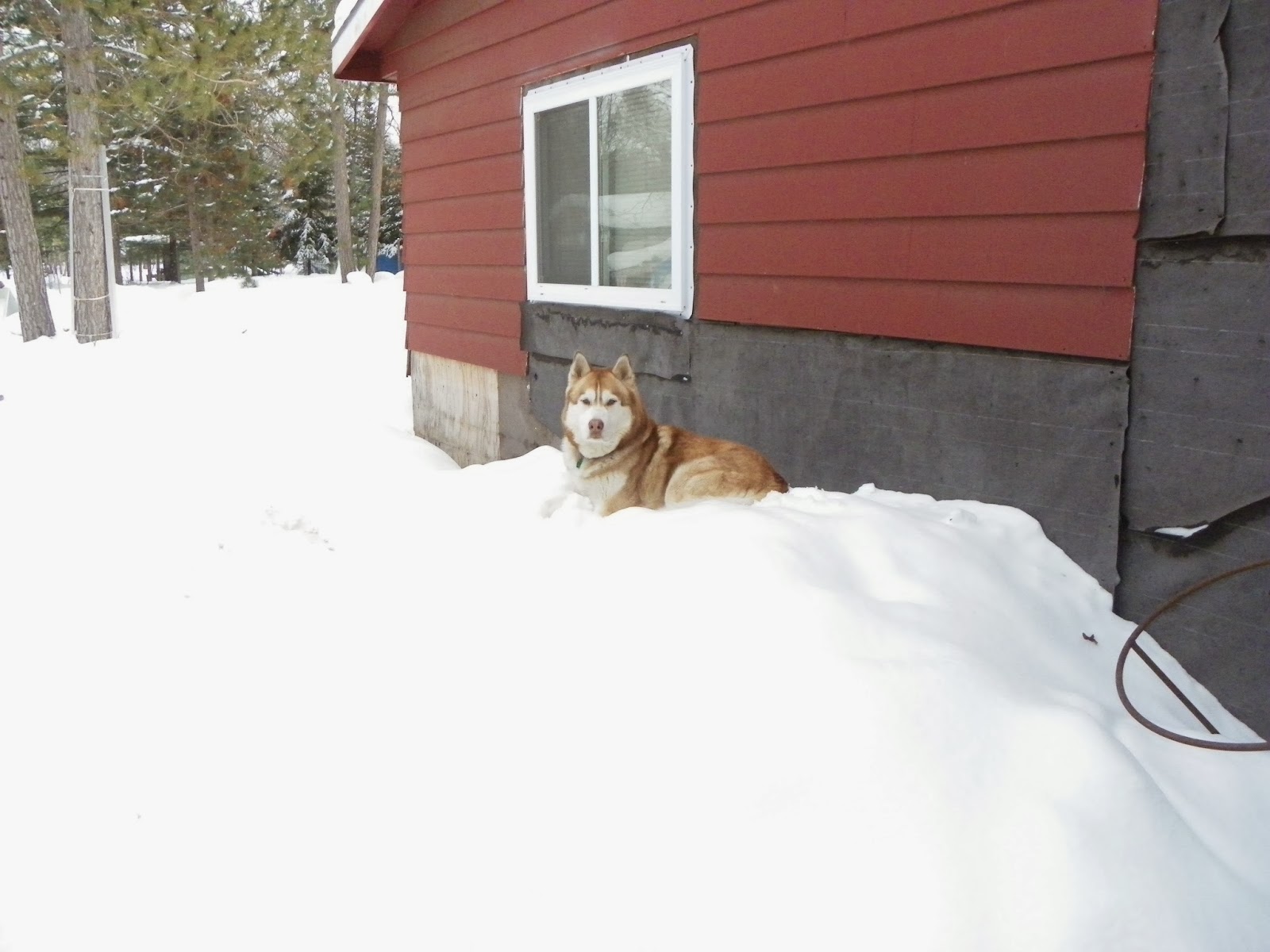 It's been a long, cold weekend of shoveling our house and garage roof.  A foot and a half of snow was up there and getting dangerous with the warm up the forecasters were predicting for the week.  We are all pretty wore out and just taking it easy today.

I think Zappa describes it best. 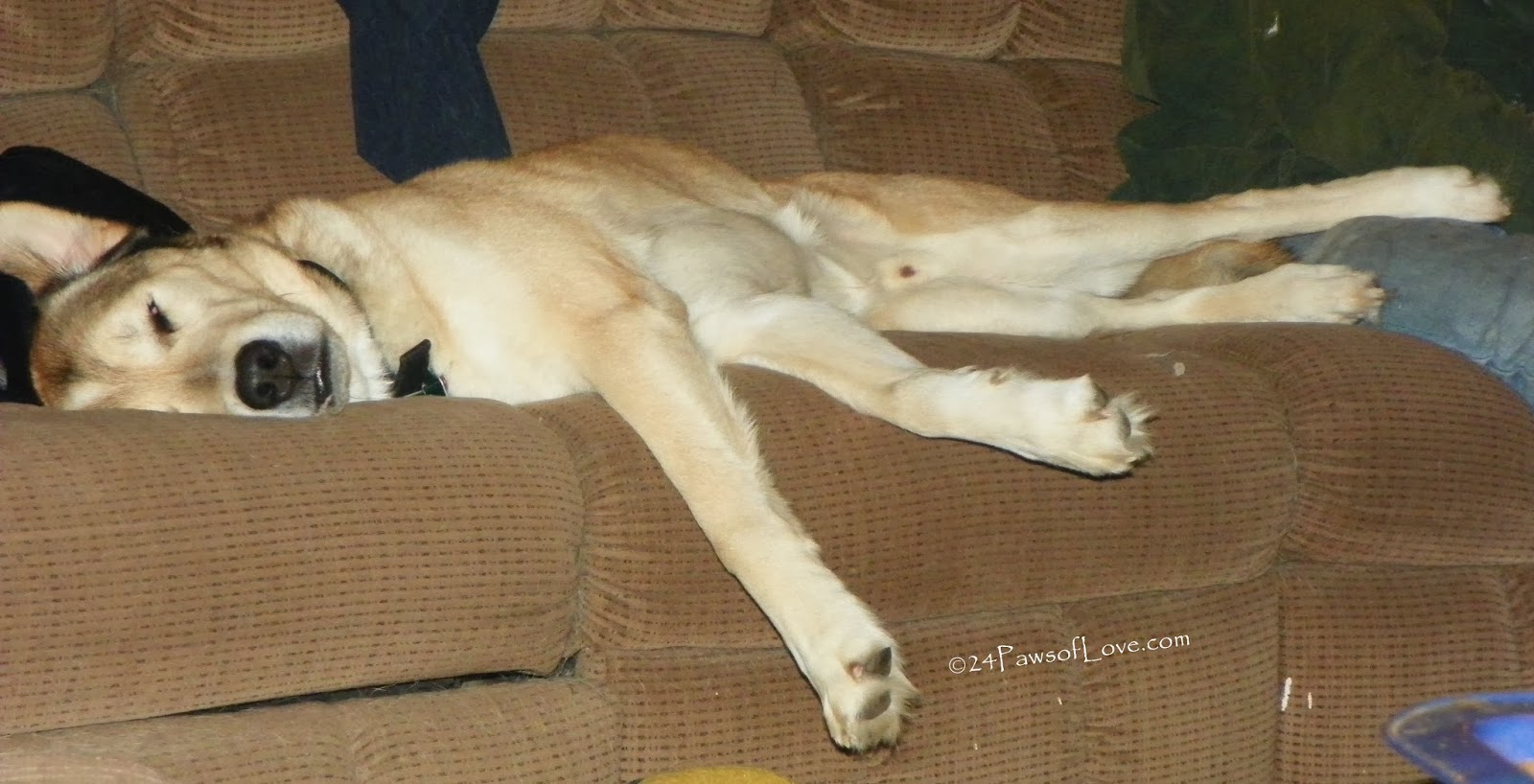 Don't even think about getting that camera in my face!

Have a great Monday!!


Posted by 24 Paws of Love at February 17, 2014 7 comments:
Email ThisBlogThis!Share to TwitterShare to FacebookShare to Pinterest

Happy Valentine's Day to all the paws and peeps.
May every day by filled with paws of love.

Posted by 24 Paws of Love at February 14, 2014 6 comments:
Email ThisBlogThis!Share to TwitterShare to FacebookShare to Pinterest

On this day in a galaxy far, far away another wonder of the world was born and brought into my life that was and still is nothing short of a miracle.

In her sweet and darling way, here is Fiona singing Happy Birthday to Daddy.  My Mark.

Happy Birthday Mookie!
You deserve it!! ☺

Posted by 24 Paws of Love at February 12, 2014 9 comments:
Email ThisBlogThis!Share to TwitterShare to FacebookShare to Pinterest

HELP! Teach us a new trick! 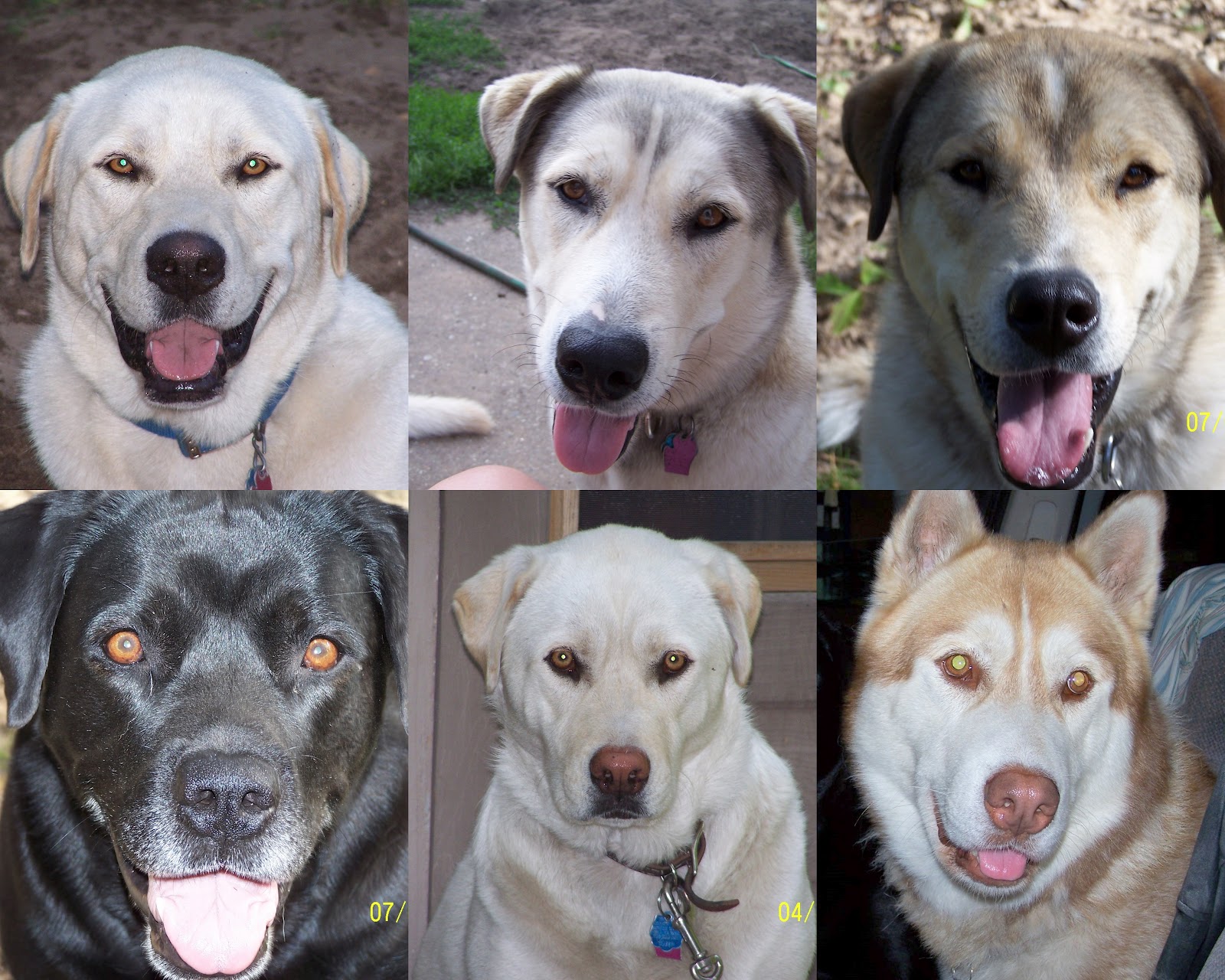 That's right we are asking you to teach us a new trick because Mommy really sucks at tricks.  We need something NEW!!  She's worked so hard at our behavior stuff that she has never really taught us any cute and fun tricks.  And hurry, because we need fun.  If you've been having the same snowy, paw-freezing, windy winter like we have then you know that cabin fever is close at hand.  It  seems to have frozen her brain and her creativity.  So help the Mom out and give us your best and easy to moderate tricks and we will show you the results when we mastered them.

And we thank you for helping out yet another victim of the winter blues crouching on the edge of cabin fever.  And nobody wants that!

Here are a list of the tricks we already know:

So as you can tell we need some fun, crazy tricks to learn and bring Mommy out of the blues.  Won't you help us please?

Posted by 24 Paws of Love at February 07, 2014 5 comments:
Email ThisBlogThis!Share to TwitterShare to FacebookShare to Pinterest

Remember when you did this to me Daddy Brut? 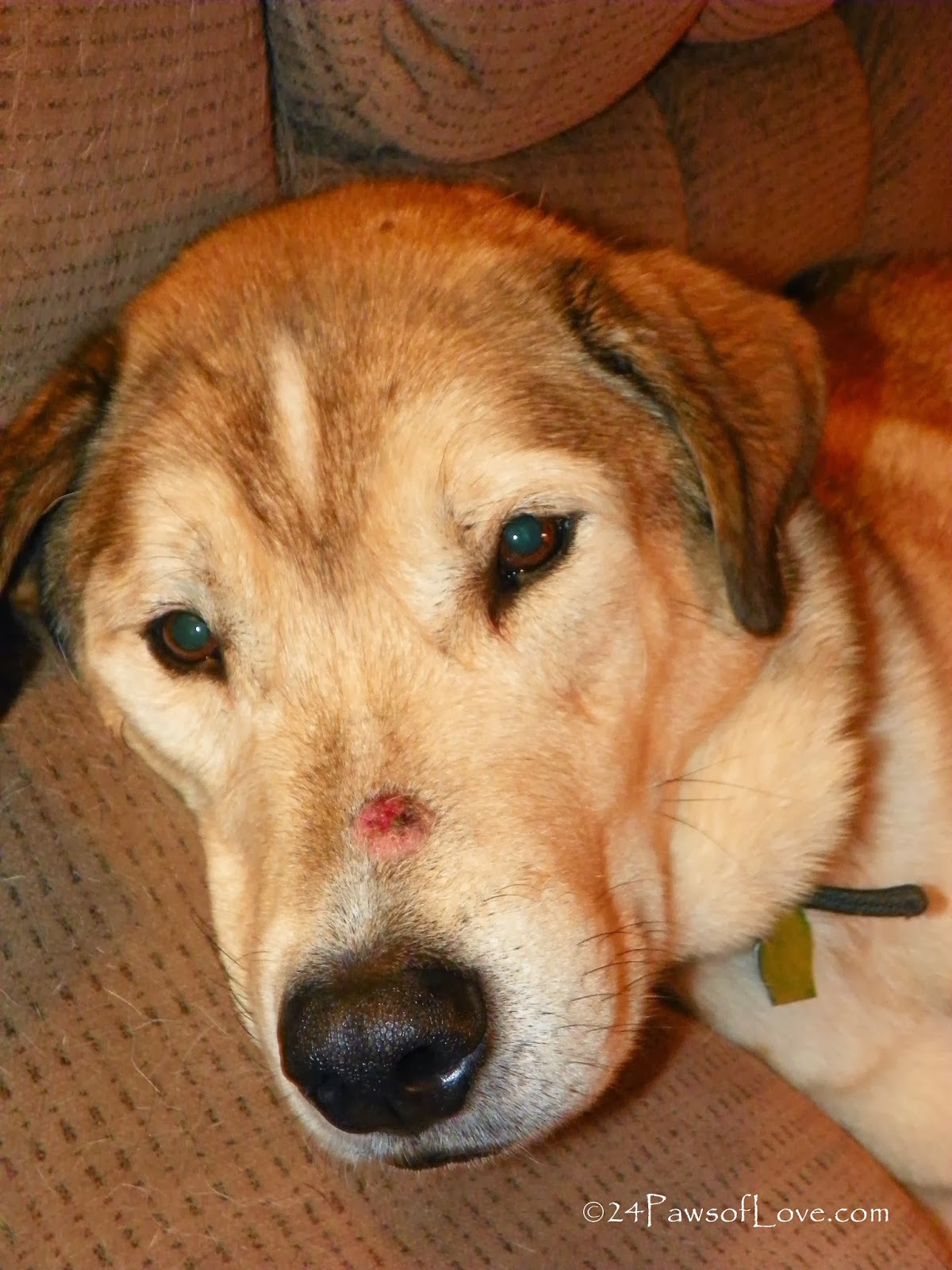 Well, I finally got you back! 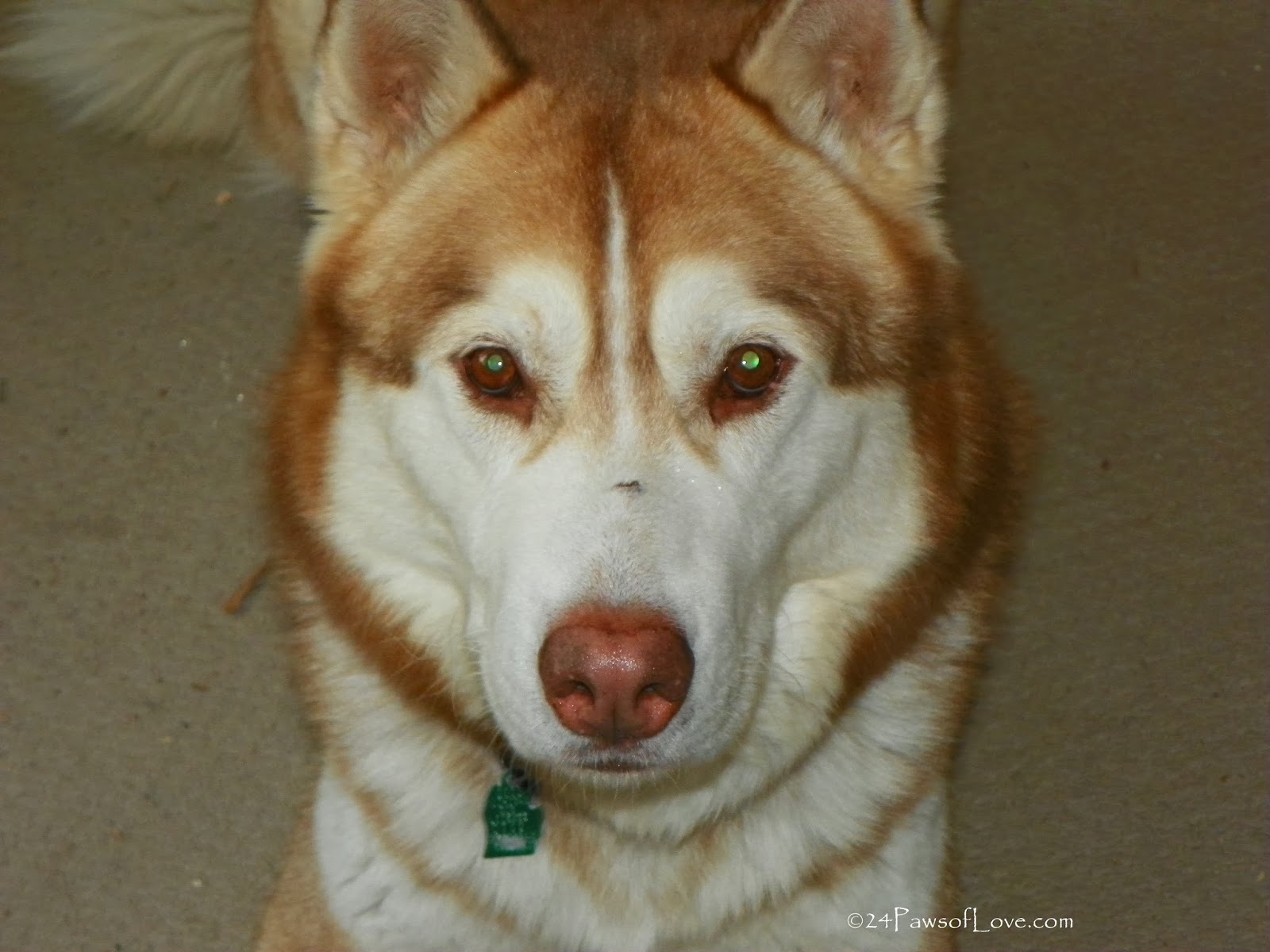 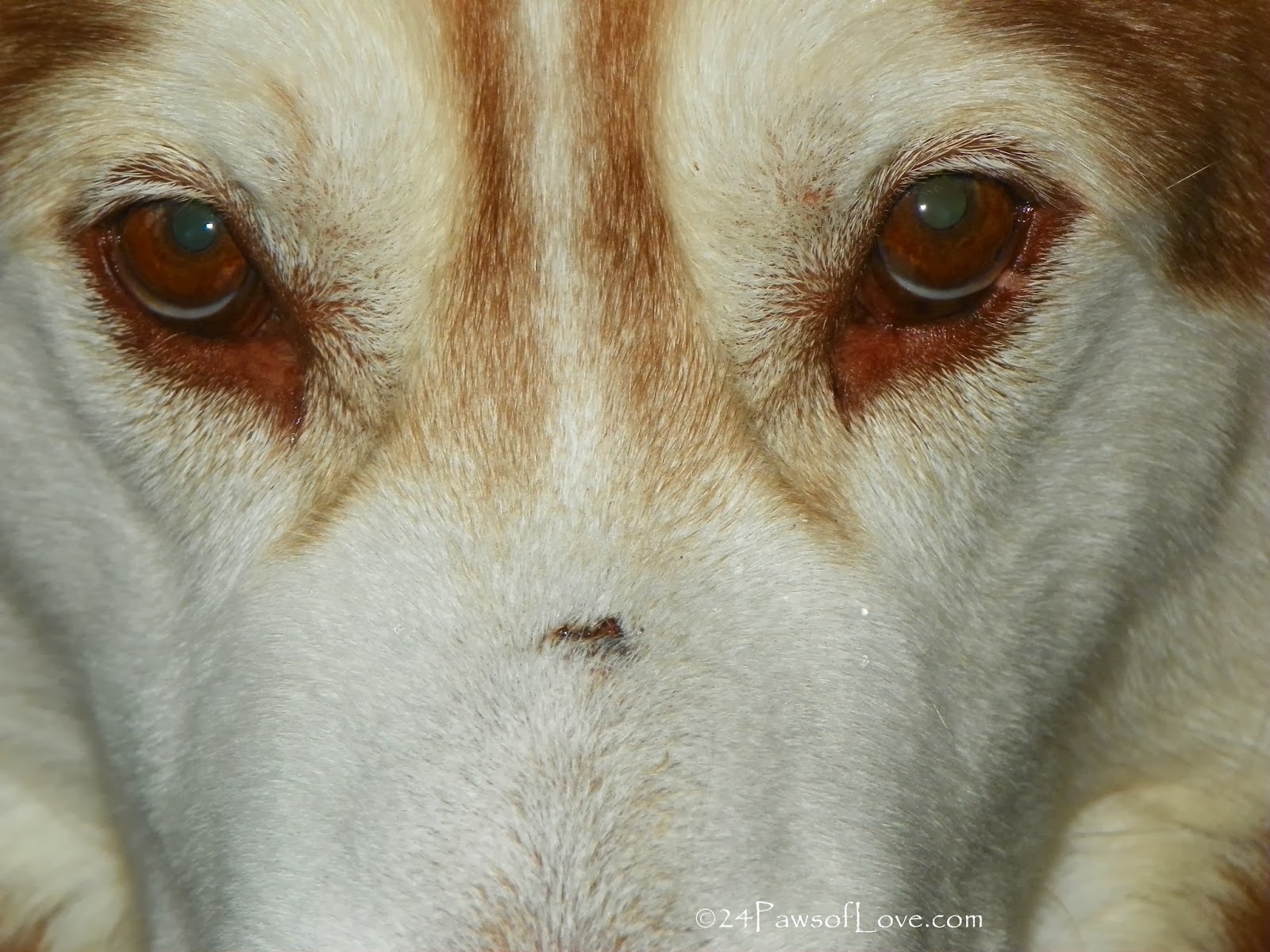 And the student becomes the master. 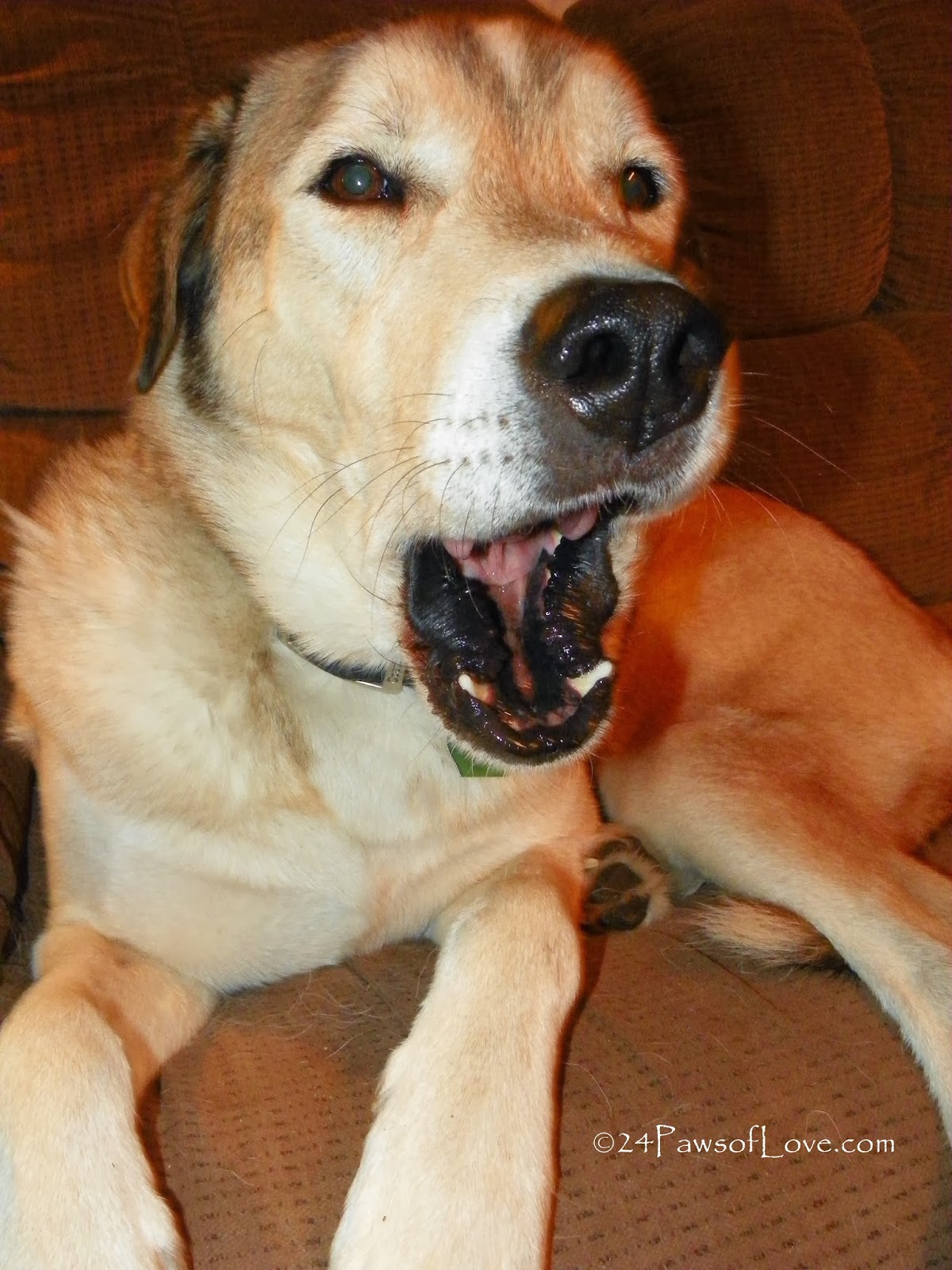 Or you might just call me a chip off the old block.
Posted by 24 Paws of Love at February 05, 2014 5 comments:
Email ThisBlogThis!Share to TwitterShare to FacebookShare to Pinterest

With Blaze being in heat and Brut being intact, even though they are separated by their packs, everything changes when Blaze is in heat.  It brings unique joys and frustration when this cycle occurs.  Here are some of my own personal views and observations.  Not everyone with a female in heat may experience the same thing. 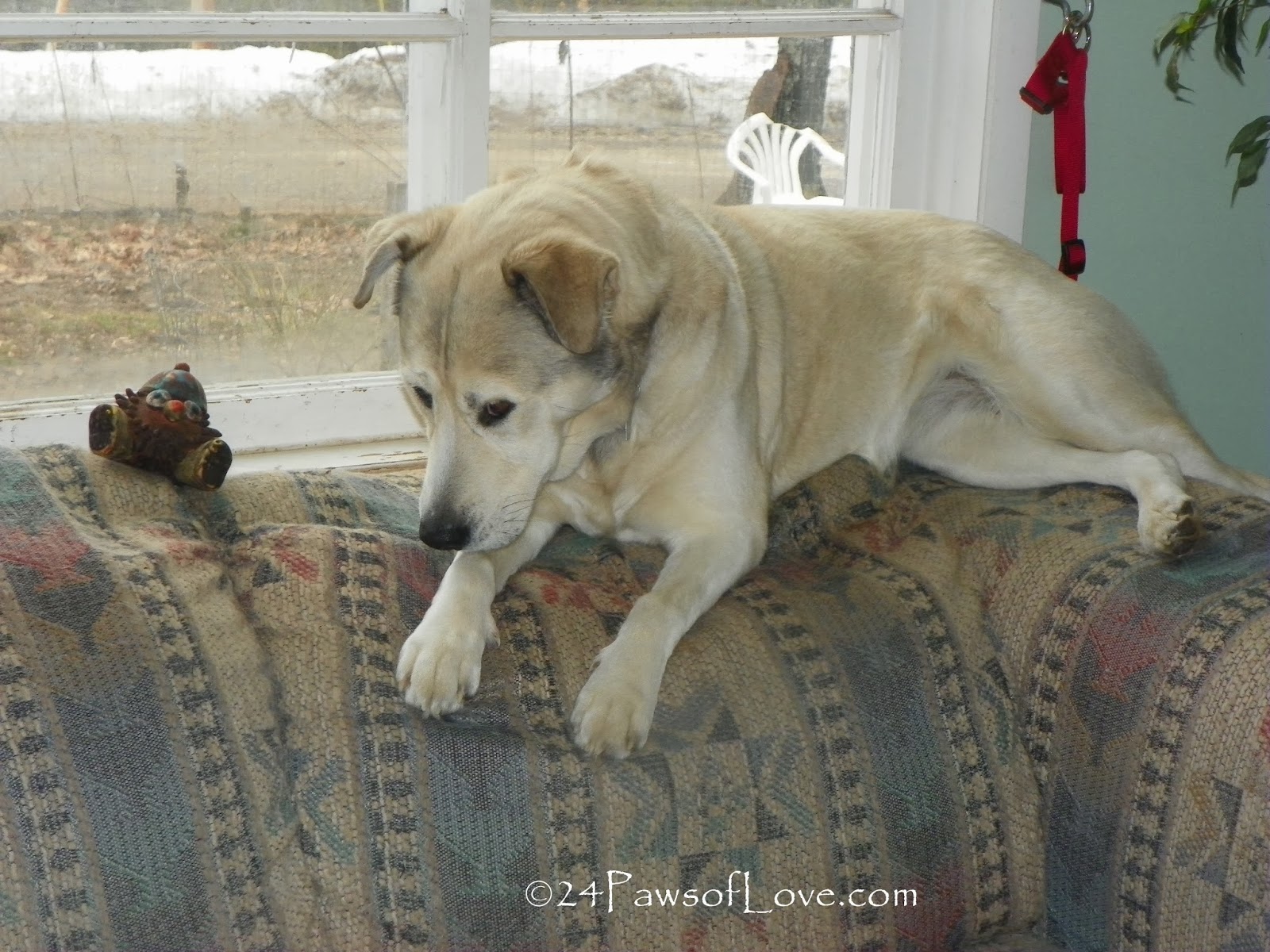 Blaze is right up there with Zappa being the mouthiest dog in the house, but during her heat she becomes very quiet and rarely barks.  She becomes more tender and loving and can be very clingy.  We've had some very intimate moments between the two us, female to female.

Brut was in such a anxious frenzy he couldn't stop trying to mount Silver (she'll always be his girl), which was made even more intense by him licking Silver's wound that he gave her a week prior.  We eventually had to separate them.  And I've had more alone time with Brut in one week that I have in a long time.  He has had both Mark and I to himself, this also quiets him down.