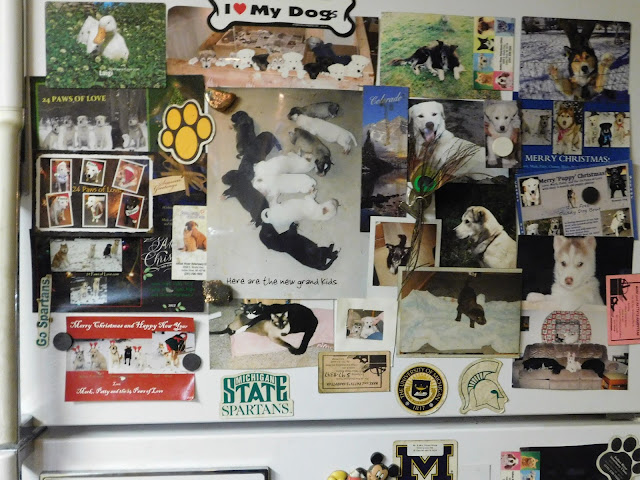 First I'd like to thank our readers and supporters.  You guys are terrific!  We wouldn't be this far in our dog journey if it wasn't for all of you.  So, THANK YOU!

I started a couple of weeks ago with step 1 of integrating the two dogs packs, which was separating them while fixing their food, because they were fighting at the door that divides them.  It is something that has went on for some time, on occasion, but since Brut's death and recently with Silver's passing the fighting (growling, snarling, snapping, teeth bared) has increased in frequency and intensity.  So I took them away from the door, by putting them in their rooms while I get their meals together.  Worked out great!

That same day after they ate for the first time without all that worked up anxiety, I started blocking the door with my body, making them back up from it to stop the barking at the door.  When I got one side settled I went to the other side and settle that dog.  And I just kept going back and forth until they gave up.

Now Chance has a habit of rushing the door when he comes in from outside and Zappa is always on the other side ready to do battle.  I couldn't figure out how to stop him for the longest time.  It took a couple of days before it dawned on me I could open the fridge door and block the hallway that leads to separation door.  Don't worry, hubby is making me a board to slide back and forth.  No need to pay the energy company more than they need!  So after Chance circles back after seeing the blockage, I give him a treat when he comes to me.  Then I go to the other side and make Zappa back up and sit then treat.  Problem he's caught on how to get a treat, bark and here I come.  So one time when Zappa was being a royal pain and wouldn't stop barking because I wouldn't give him a treat, I put him in his room, he shut up and that worked out great.

And for those times I don't make it in time to stop a debate, I have a shaker can and a cowbell to get their attention.  Thankfully I have only had to use them a few times, but they are nice to have around.

So far it is going good.  The first 4 or 5 days were a little hairy, but now they only bark at the door with each other, instead of fight. At least the ones I don't get to in time.  They are short burst of "talking."  Things have really calmed down this last week.  I doubt it is all over, given the chance they would do it again, but for now we are moving forward with our "plan" as it comes to me.  :)

Here's a short video of our progress:  (or on YouTube) 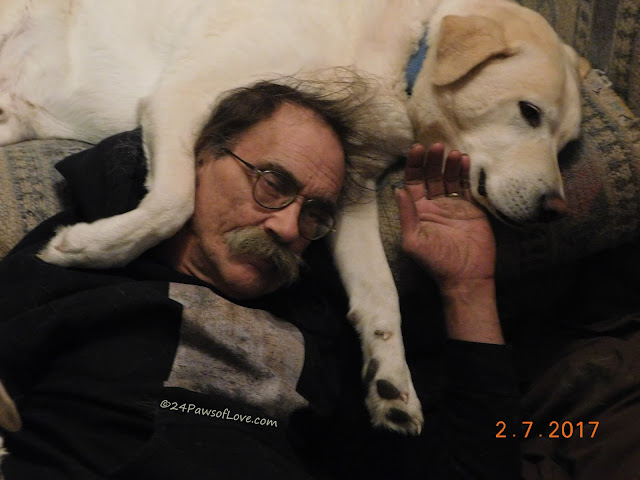 STEP 1 of INTEGRATING THE TWO PACKS-Diffuse the Tension!

Please forgive my silence as I have been grieving again.  Two years ago in the spring we saw the first signs of Brut's tumor on his spleen.  Now that can only be seen in retrospect and I am remembering my dear boy and Silver.   I miss them so much.  Some days are harder than others.

With that said, their spirits haven't left me and Silver in particular guided me through this next experience.  The beginning of the integration of our two packs starts with:
Diffusing the tension!

Two packs of dogs, each with their own side of the house and a door that separates them. The boys, Zappa and Chance only fight/talk with each other, while the girls, Fiona and Blaze keep to each other as well. Most of the time Zappa is the instigator, but Chance has gotten many digs in as well.

This door is the focal point for the two packs.  Most of the time they "talk" to each other, but there are other times when there are "fights."  Growling, snarling and just being nasty to each other at the door.   And mealtime was the worst!  I used to have their dinners prepared so there was no time but to bark and be happy about food.  As they've aged I've added to their menus, which takes more time which in turn has grown into an all out riot while preparing their food!

I have never known how to stop this behavior.   I could never figure out how to be on both sides of the door.

The light bulb.... I put Chance and Blaze in their room and Zappa and Fiona in theirs and then I got their food ready.  Cutting the tension in half, theirs and mine.  They ate a little slower and I notice a huge differences in their demeanor.  All that pent up anxiety, fear and anger was diffused.  Finally!

I finally had made a breakthrough.

It was a step in the right direction.

I hadn't realize until that first time of putting them in their rooms, just how much tension there really was and the impact it was having them.  This is a sort a new thing with the food since Brut and Silver died, with each death it increased.  It's not like I am oblivious to the strain and tension between them, their behavior at the door has been going on since Chance and Blaze first moved back with us, I just hadn't found a solution.  It's not in any book I know of, so we just keep plugging along until the next light bulb goes off.

I'll tell you more about the next step of diffusing the situation in my next post and I will try to have some video too!
Posted by 24 Paws of Love at April 05, 2017 5 comments:
Email ThisBlogThis!Share to TwitterShare to FacebookShare to Pinterest
Labels: anger management, Blaze, Chance, dog behavior, dog behavior training, dog fights, dog food, dogs learning how to socialize, Fiona, food aggression behavior, Zappa
Newer Posts Older Posts Home
Subscribe to: Posts (Atom)