Was up all night with Fiona a few night ago.  She was acting like she was in pain and it came on all the sudden.  Gave her a Tramadol.  Did nothing.  She was pacing and panting and acting like she was going to puke.  She'd been eating rabbit poop that day, so I thought she was feeling sick.  Gave her two Pepto Bismol tablets.  Nothing.  Then I thought it was her liver.  None of her symptoms matched with liver failure.  Back to the pain theory when I watched her try to lay down, after pacing for hours and hours.  She couldn't extend her front legs.  She was so anxious that I gave her a couple of Inositol, which may have slightly helped.  The only thing that calmed her down was going outside and sitting in the rain.  She was actually quiet and sitting down.  We were under the pine tree near duck fence, where we talked.  She told me her secrets, I told her mine.  By the time we went in it was 6:30am and we'd been out for an hour.  By 7:30am I woke up Mark to get ready to go to vet.  Thank God it was Friday and our vet was there.  Just before Fiona's 9:30 appt. she finally laid down while Mark stroked her head and started to fall asleep.  She was exhausted from pacing, panting and being in extreme pain.  The vet gave her a new pain pill to use for 3 days along with her Galaprant and she slept all day on and off, as did I and Fiona is looking so much better.

Thank God for our vet and modern meds and thank you for taking care of our girl and all our dogs.  We are so grateful her life isn't over yet.

Fiona is doing great and back to her bubbly diva self. 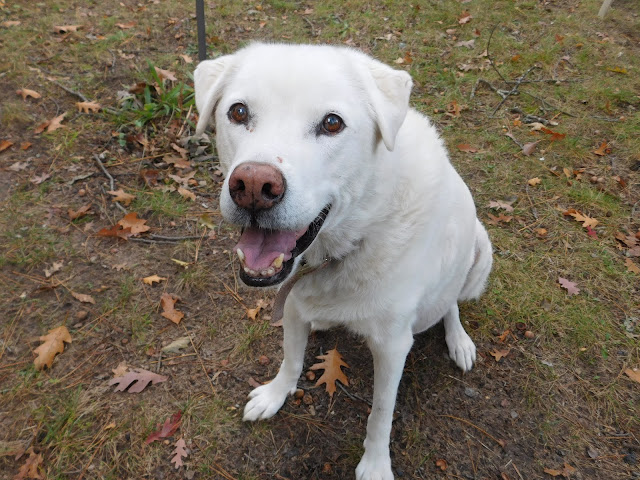 Well, we took Chance in to get his ultrasound.  He really fought going back to the vet for a third time in three weeks and having to wear his muzzle.  Somehow the vet was double booked for appointments and so we ended up dropping him off for part of the day.  Which was one of my worst fears for Chance.

So, we worried for the next four hours until we got the call to pick him up.  The vet called us in and showed us the images she took from the ultrasound.  It was obvious that there was a mass on the liver and the liver itself was made up of cancerous tissue.  It was the hard truth we needed to know.

While she was explaining the pictures, I kept hearing a dog whining.  I looked up and there was Chance looking at us, crying to go home.  I felt really comforted that I got to see him in the kennel and that he was OK.  It gave me some peace of mind about how his day went.

Chance is on two medications- one for the fluid in the abdomen to continue to drain out and one for his liver to continue to function.  And if you saw him without telling you he has liver cancer, you would never know he has it.  Chance is still the dog with the most energy, still pulls me along on a walk and is as happy and moody as ever.

So, we are just living one day at a time with all the dogs and making the most of each day with them.  Pulling out the camera more, trying to hold on to time.