I used to get upset when a blogging dog would pass and you would almost never hear about the dog again.  I had invested my heart and emotions into that dog for years and poof, they were gone.  I felt like I never got any closure and I would struggle with my emotions.

I wrote this a couple of weeks ago:

The feelings of loss is still strong.  I keep thinking I'll be able to write about some of the memories I have with Chance, Blaze and Fiona, but for now it still hurts too much.  My sweet babies are gone and I can only digest it in little bits.  So much loss in such a short amount of time.  It is still so hard to believe.  So hard.

I am still trying to comprehend it.  I didn't understand because I was able to write and write about Brut, about his passing and after.  I wanted to do something different and share about the loss and the pain and the hope and I can't do it with Chance, Blaze and Fiona.   I am still stunned and there are no words.  I can't even seem to dig up a picture to post.  The effort and emotions are too much.

So for those of you I silently criticized  and was disappointed in, for not sharing more of your dog after they passed, I am sorry.  I didn't understand.  Forgive me.

Posted by 24 Paws of Love at October 21, 2021 2 comments:
Email ThisBlogThis!Share to TwitterShare to FacebookShare to Pinterest

Zappa initiated the day by coming in the kitchen while I was figuring out breakfast.  We shared some croissants then hung outside.  He never comes in the kitchen except to pass through, so I took that as a big step.  Considering he'd been barking on the bed just before and he doesn't like to get down very easy, so again, this was huge.  After our outing he went back on the bed.  I was just going to mow the lawn, when he woke up, got off the bed and wanted out.  So we hung out in the backyard, for quite some time before going out front.  Next thing I knew it was 4pm.

I could have taken him back in the house and mowed, but there was something special about him today and I couldn't pass up the time to be with him.  He made the first move and it was up to me to honor that in every way possible.  And it was very sweet of him to think of me today.

It was my turn to walk him and that just topped off our evening.  Then Daddy came home and all was perfect.  What a beautiful awesome day.  And it all started with Zappa and a walk in the kitchen.

(10-6-2021)
Posted by 24 Paws of Love at October 12, 2021 No comments:
Email ThisBlogThis!Share to TwitterShare to FacebookShare to Pinterest
Labels: Zappa 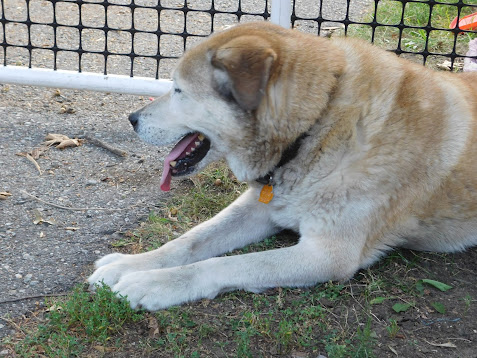 Zappa is coming along and is showing more signs of happiness than sadness.  Beside my hubby Mark, Zappa is bringing the joy back into my life again.

Here are some of the Zappa happenings:

Zappa has been going on these long barking sprees and for the last couple of months, we don't know what they are about, but we either ignore him or join in.  Think he just wanting to hear barking again, even if it was his own voice.

While he used to not like a lot of attention, Zappa has discovered that attention from us gets him whatever he wants.  And he is liking that.  He has been using this power, to teach me the language of his barking.  He thinks he is pretty clever getting us to jump when he calls.  He is the new King!  lol 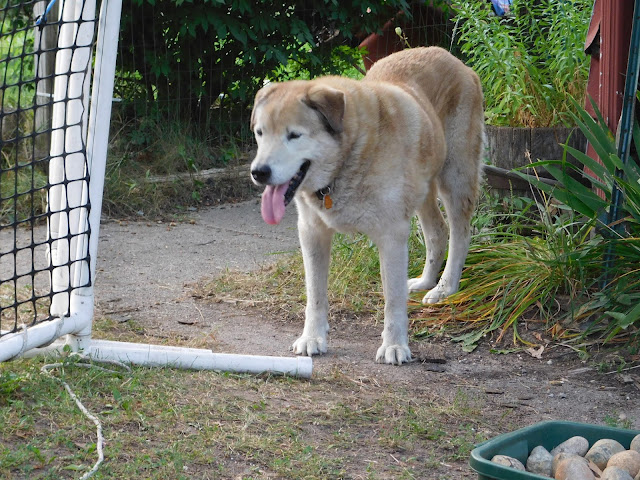 Not only does Zappa have full run of the house and both front and back yards, he is the first dog to experience hanging out in the driveway with us.  I think he likes his new found freedom!

We are developing a routine with him for our days together and that has been pretty cool.  I didn't think I would ever get used to having only one dog, but I am kind of liking the quiet and calm that comes with it.  Not to mention the extra time to get to know Zappa on a whole other level.  Since it is just Zappa,  we are witnessing his true self evolve.  It is not only getting exciting for us but for him as well.  When treat time comes around he will sometimes get up, bark and shake and whip his head around.  Which is hilarious because that's what Fiona used to do.  Before he would stand and bark,  He was always a happy dog, but his happiness is lasting longer than it used to as he was more serious with the other dogs around.

And it has been fun getting to know Zappa all over again.  Before my moments with Zappa were few and far between with the rest of the crew, so I really didn't know him very well except in those moments.  And now that we are through the scare of the dogs' death, Mark and I are both getting to know the real Zappa and that is pretty cool.

I am kind of liking this new dog world we are in with Zappa leading the way.  It's still too early to think of adding a dog or two, neither of us are ready for that, which makes this time with Zappa even more special.  We have been so blessed to have him every. single. day.