It is every dog lovers fear...

It is that deep pit in your stomach that is always there in the back of your mind.  It is the one thing as dog lovers that we can agree on and keeps us united.  It is a fear that grows slowly every day, each day at a time.  There is no shaking it or stopping it and one day it will happen.  Your dog will die.  Your best friend will leave you and you will be shaken to the core.  We know what it is like, because you will even bond with complete strangers that say they lost their dog and you will nod your head because you know the pain and anguish of their loss.

We know the fear all too well, as we live with four dogs all the same age and all from the same litter and who have already lost their mother and father.  It is scary.  When Zappa pinched a nerve in his lower back, that half hour of waiting for my husband to return so we could take him to ER, was frightening.  Not knowing what was happening to him as he shook and shook and shook in my arms, I didn't know if this was it or not.  Thoughts circled in my head, if it was or wasn't.  I shook as well as that fear bubbled up, praying and praying for help.  I do believe that when one goes the rest will follow like dominoes.   And it will be just too much for our hearts to handle.  It brings a cold reality when one of them is hurt or sick, that this could be it.  Hubby, Mark and I tremor in that reality and the growing panic that we will never be ready for.

I should state that I'm referring to an earlier than predicted death, not so much one of old age, which I think we all ask for.

Chance was sick today, only two weeks after Zappa was and vomited his breakfast three times after eating.  The panic meter started to rise:  the obnoxious heat and humidity we've had and the dogs still having some of their undercoat.  The fact couple with company yesterday, that would have set off Chance's panic button to an already hyper dog and couldn't deal with all the heat. I've spent all day trying to adjust that meter, but the terror is real.  The fear that there is something more wrong that what I see.  The fear that just like his dad,Brut, that Chance has come down with something and there are no warning signs, only to find out too late.  The fear of losing him sooner with not enough time for anything.  Why?  Because it happened to me.  Brut was gone at the young age of eight years old.  With no symptoms that anything was wrong and once diagnosis too late, he was gone.  Just like that.  Gone forever and ever.  Gripping reality for the fear that runs deep for his children.

Hopefully Chance will be feeling better by tomorrow.  If not we are off to the vet.  And hopefully Zappa will be OK, as he took the last of his pain killers today, so now it will be a watch and wait game.

And as far as Mark and I, we will continue to spend all the quality time we can with our dogs, no matter the fear that lies beneath.

We will pray for all you that live this fear.   (((HUGS)))
Posted by 24 Paws of Love at May 31, 2018 4 comments:
Email ThisBlogThis!Share to TwitterShare to FacebookShare to Pinterest
Labels: Brut, Chance, death, death of a dog, Zappa

Zappa is doing much better since his er visit three days ago where he was treated for a pinched nerve in his lower back. 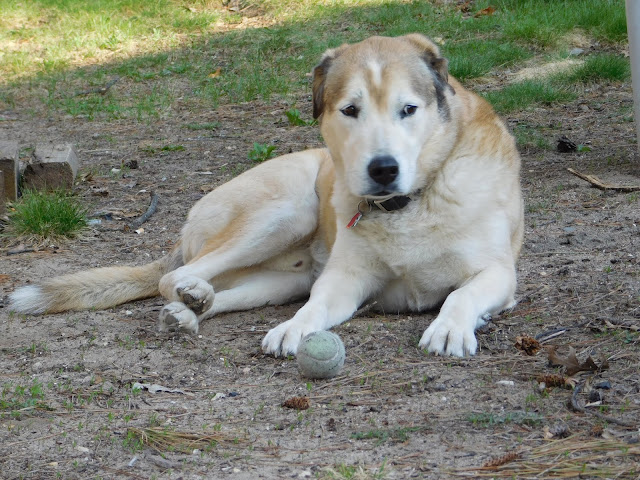 He's been resting and going for short walks.
I knew he was feeling better yesterday when the "Mouth" came back to join us.  He'd been so quiet those first days that I felt spoiled.  bol  It was good to have him back though. 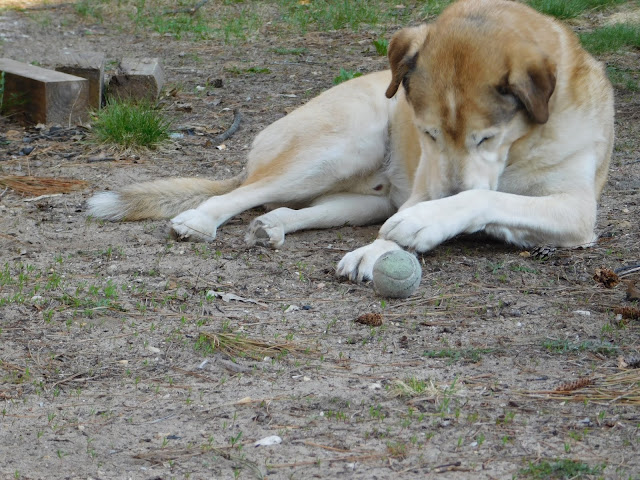 We've had some great spring weather and Zappa's been taking advantage of it.  He has been staying outside all the time. 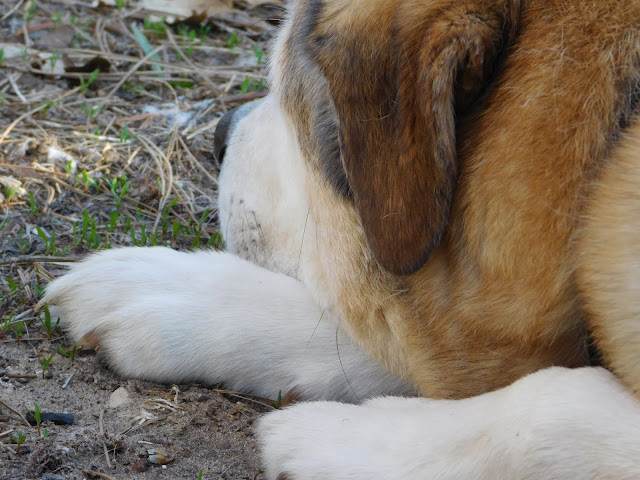 We have our fingers crossed that the nerve is becoming un-pinched with the rest he's had and that the anti-inflammatory pills will heal him up real soon.
Posted by 24 Paws of Love at May 23, 2018 4 comments:
Email ThisBlogThis!Share to TwitterShare to FacebookShare to Pinterest
Labels: Zappa, Zappa aka the Mouth 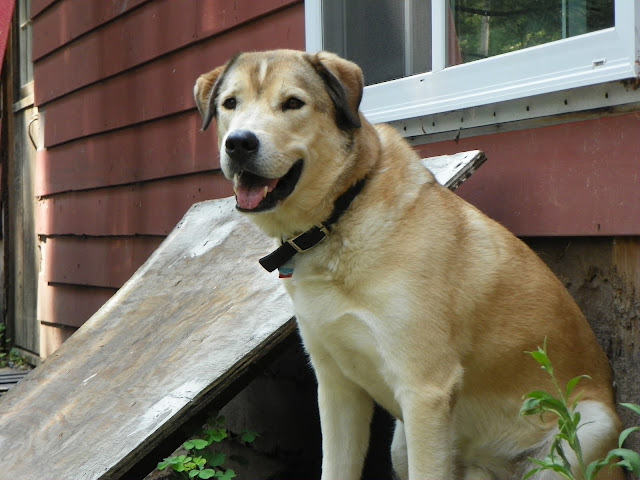 Had a scare with Zappa today.  After eating breakfast he started panting, pacing and shaking uncontrollably.  My first thought was bloat. Fatal bloat.  Zappa sat in between my legs and I tried to sooth him as well as I could while he trembled in my arms.   Something was definitely wrong.  My second thought was that hubby, Mark had left for work half an hour ago and with only one vehicle, I just kept praying that Zappa would make it through.    Mark turned home immediately after I called him and after talking to the emergency vet, we took Zappa to the emergency vet clinic.

Zappa had no problem getting in the car and all of his symptoms seem to vanish on the ride.  Great, I thought, now what?  Should we keep going?  Or turn around and wait until tomorrow to go to our regular vet?

Since we made an appointment with the ER vet, I decided it was still probably best for him to see Zappa.  Zappa's quick "recovery" gave me the impression that it was not a gastronomical issue, but something else.

Zappa was great through the exam and the doctor quickly came to the diagnosis of spinal nerve impingement or a pinched nerve in the lower part of the back.  The doc gave him a shot of Rimadyl and sent us off with some Carbuprofen.

Zappa settled down after we were home and rested for the most part outside.  I stayed with him on and off through the day doing my balancing act between the two packs of dogs.

When I fed Zappa his dinner I noticed some of the same minor symptoms of pain that started after he ate his breakfast.  They were subtle but I could tell.  I sat with him alone outside, until Dad came home and he settled down again.

So our next step is to talk to our vet and find out why he's in pain after he eats and what I can do about it.  And any other information pertaining to his pain.

And while he seems to be on the mend, Mark and I have fallen to pieces.  Even though I felt calm and centered when this all started, after we got home I felt like I could sleep for a week.  It is amazing all the life and death feelings that happen when your mind starts to whirl when your furbaby is feeling well and you sit helpless trying to console them.  I'm glad we didn't wait to go to the vet.  I feel confident we got the right diagnosis and help.  Thank you to the Doctor and the Vet Clinic.  My boy's going to be OK.
Posted by 24 Paws of Love at May 21, 2018 2 comments:
Email ThisBlogThis!Share to TwitterShare to FacebookShare to Pinterest
Labels: Zappa

To the Best Mother in the World

Exactly one year and 4 months today, I lost the best mother in the world...our Silver Dollar.  She was everything I could want in a mother and then some.  Silver had a strong mothering instinct and was a nurturer from almost the beginning.  She taught me everything I know about being a good dog mom especially with her own puppies.


Thank you Silver for everything!


Happy Mother's Day to all the Dog Mommas out there and their kids!
Posted by 24 Paws of Love at May 13, 2018 2 comments:
Email ThisBlogThis!Share to TwitterShare to FacebookShare to Pinterest
Labels: Momma Dog Silver

I really don't know how I would get through the day if it wasn't for hubby, Mark, the 24 Paws and our two kitties. 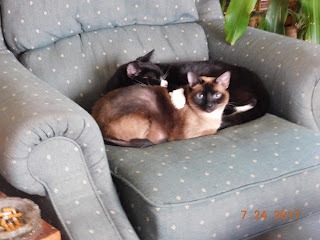 They are all my best friends and I couldn't ask for anyone better.  I love them more than life.  They are always there for me, always love me, and have helped me to love myself.  I couldn't be more honored or blessed to have them all in my life.  And I know I don't deserve such blessings, but God must have thought otherwise or I wouldn't be with them today.  Everything in my life has lead to this moment and everything I could have dreamed of is here.  If you would have told me 30 years ago that I could be happy, fall madly in love and have all the unconditional love possible, I would have never believed it.  Never in a million years.  Yet, here I am.  Yes, here I am.  Living, loving and tackling every sharp curve and obstacle in my way.  We are going to do it. I am going to do it with the help of my family and God.  We are going to do the impossible.  Because that's what we have...impossible love. 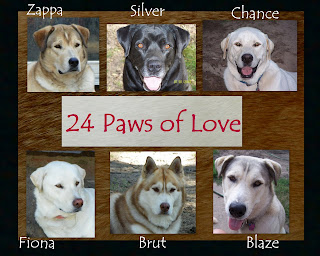 Posted by 24 Paws of Love at May 09, 2018 2 comments:
Email ThisBlogThis!Share to TwitterShare to FacebookShare to Pinterest
Labels: cats, cats and dogs living together, dogs, unconditional love

Oh, how I love my dogs!  Just as it seems my world is full of gloom and doom, they are right there trying to cheer me up and giving me another reason to carrying on.

It's been a long week for us here at the 24 Paws of Love, so how about ending the week with some fuzzy puppy pictures! 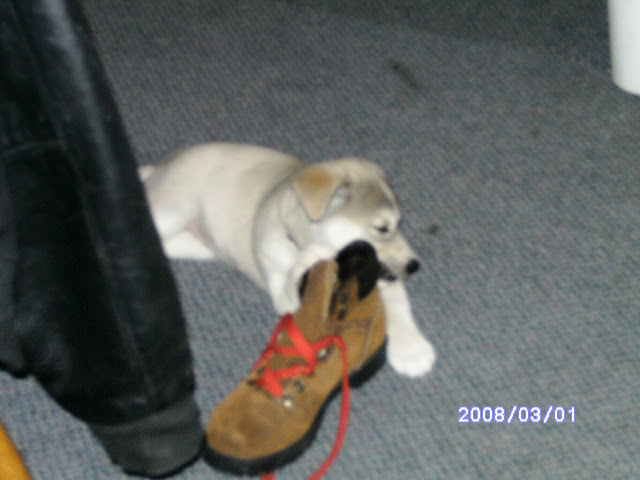 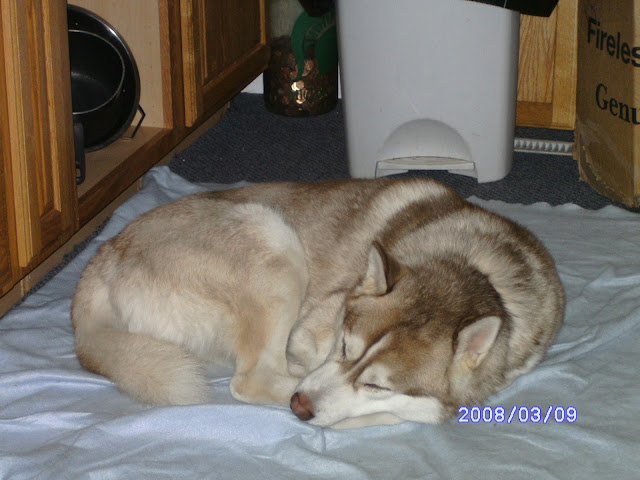 Sweet Daddy Brut getting a break from the kids while napping on their blanket. 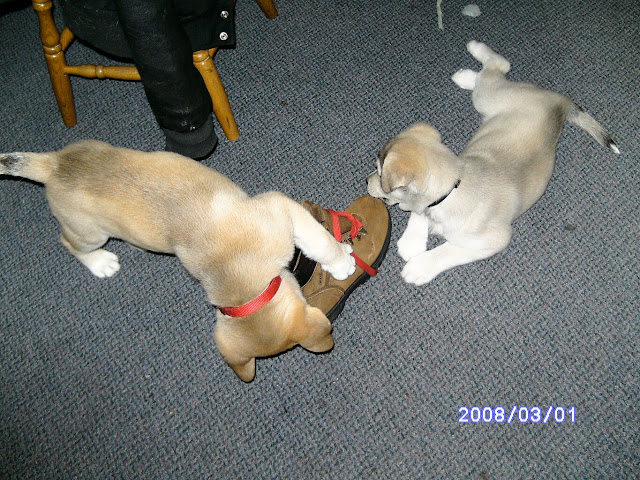 Zappa (l) and Blaze (r) playing with the boot. 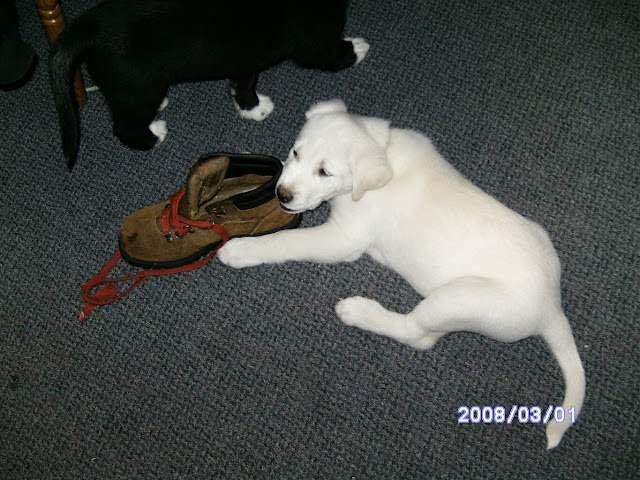 One of Chance's brothers, working on the boot! 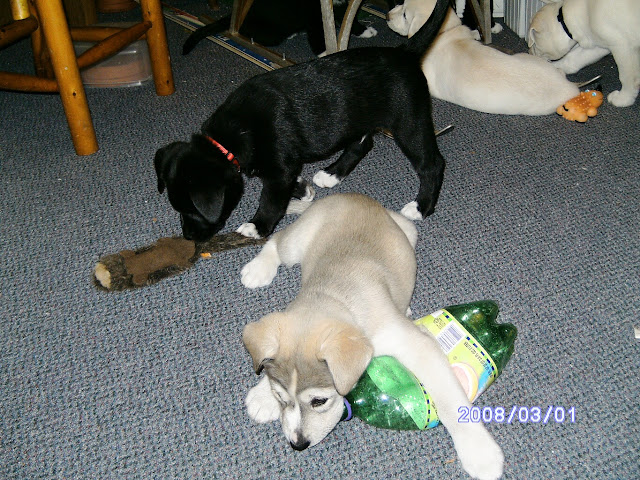 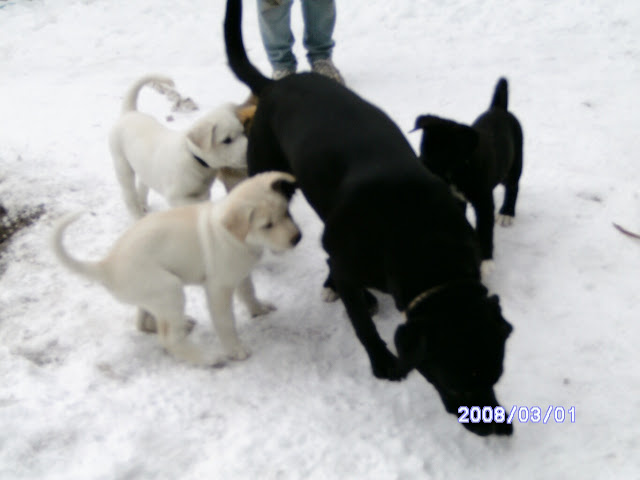 Momma dog Silver on the run trying to save her teats!