Brut Thursday- My Brut for a Walk 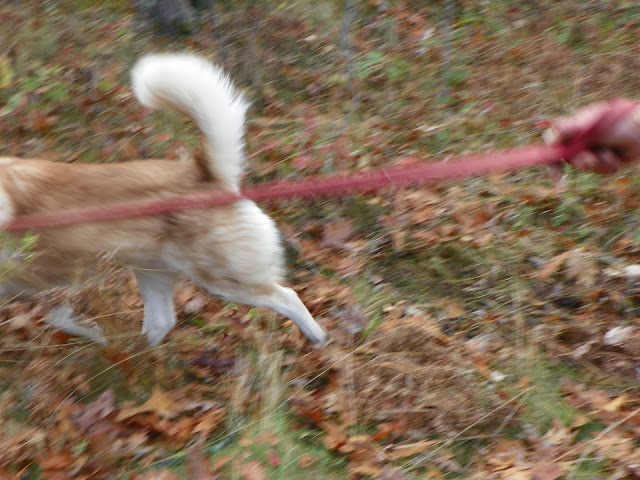 I miss walking Brut.  I miss the connection we had while we were walking.  Brut always knew what time walk time was.  He would get excited and dance around barking.  The joy he had about walks would wash away any negative thoughts I had about taking that walk, especially in the winter.  We have harsh winters here in Northern Lower Michigan and we walked through them all.  In his eight years, I can only think of a handful of times that I actually missed a walk with him.  He was my motivator.  Brut kept me disciplined.  He kept me going.  I never thought twice about taking him for a walk.  We just did it.

Over the last four years that Brut has been gone, I have lost a lot of that motivation.  It seems to be getting worse with each passing year.  Most days I have a mental battle over walking the dogs, especially in the winter.  What was once so easy with Brut, has become a difficult choice every day.  The loss of Brut isn't the only factor at play.  We are all getting older with aging bodies and arthritis that hinder our walk times, but it is the days when we can all take walks that the war inside rages on.

Brut was my heart and my heart isn't in it as much anymore.  I feel like I'm burnt out when it comes to walking the dogs.  When we do go for a walk, despite not having that Brut connection with our four, I still have a connection with each one on our walks.  It's just so different than it was when Brut was here.  I am having a hard time transferring that Brut love, that pure love of walking with the dogs, with the kids.

Our winter isn't helping either, but really that is just an excuse.  It is just me, still hurting four years later for my Bruter Boy, who always made my day and our walks just a little brighter.
Posted by 24 Paws of Love at February 28, 2019 3 comments:
Email ThisBlogThis!Share to TwitterShare to FacebookShare to Pinterest
Labels: Brut, Brut Thursday, dog walks 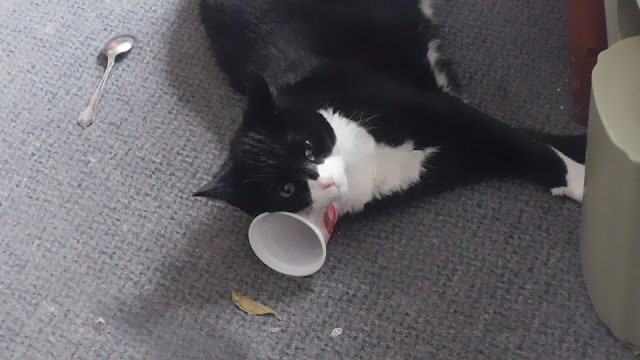 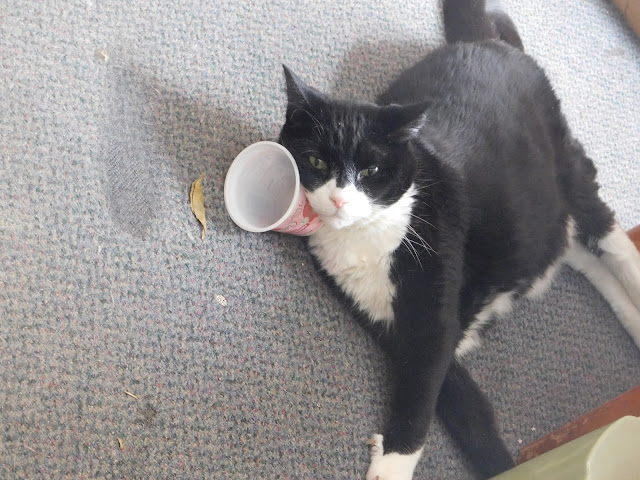 Change in the Hierarchy

You wouldn't think that a change in status could cause so much disruption between two dogs.  But it does.

It's been about three and a half months since that significant fight (read: here) between Chance and Blaze.  The fight that started when I started to fix their dinner.  All the dogs were over anxious and quite hyped up when Chance and Blaze got into it.  I called their names.  They didn't stop.  I believe it escalated into a challenge from that point, because they kept at it.  I also believe that is when everything changed.  Nothing between Chance and Blaze has been the same since.

Blaze has always been the Alpha girl and Chance has been the Alpha boy, but it was always Blaze that had the final decision about anything.  And now it is just the opposite, except Chance is a bit more aggressive than Blaze was as head boss. It changes the whole mood and character of the Front Dog's headquarters and I don't know that I like it.

It is really hard to describe what I'm seeing, but what has really changed is Chance's demeanor.  The way he carries himself.  The way he looks and acts like a primitive being.  Like he's gone back to some deep root in his ancestry and this new creature has emerged.  Something like what I saw with Brut when he would pull rank, yet it was more natural for Brut.  He was a born leader, but Chance acts like this skin is too big for him.  Chance's demeanor isn't flowing as a natural course of action.  He is struggling with it.  Is it because I can not accept it or know how to?  Or is he just trying to find his way into this new skin he's obtained?  I don't know but I'm sure there are plenty more questions that will follow.

And as for Blaze, she has developed a fear of Chance that seems neither of us humans are able to soothe.  She just stays out of Chance's way.  Chance and Blaze's relationship has always reminded me more of a husband and wife than brother and sister.  And now even more so, they remind me of Brut and Silver, with Chance getting all the attention and Blaze in the shadows. It is like a repeat of history, although with less aggression than Brut had.  I make a point to spend quality time with Blaze, but she always seems so leery, like she's always watching her back.  I can't believe my confident little girl needs to regain her confidence all over again.

I don't know how I feel about this change of power.  It makes me uncomfortable and is unsettling to say the least.  I am trying to understand to the best of my ability, but it is a bit daunting.  I probably sound over dramatic.  He hasn't grown horns and started stalking Blaze or anything drastic like that.  lol  It is just different.  Like when you run into someone you know and they got a new haircut.  You notice something is different, but you can't quite place your finger on it.  And the more you study them, the more you notice that something is definitely different.  I'd say that is how it feels for me.  This is me flushing it out to get a feel for what has happened between Chance and Blaze.

If you read this far thanks for reading.  Have you ever  experienced a change of hierarchy in your dog packs?

We are buried in a couple feet of snow.  At least!  Daddy Mark has been making snow paths with the snow blower, since we first got snow in December.  Good thing too, because we keep getting more and more snow as winter carries on.

The snow blower adds to the snow total, as you'll see in this first video of the front yard. It is more like 3 feet of snow out there. Daddy Mark and the Front Dogs take you on a tour of their snowy world.


It wouldn't be a complete tour if we didn't take you in the backyard with Daddy Mark and the Back Dogs.  This is Zappa and Fiona's snowy world.

Can you believe how deep it is?  It has been a good five years since we had this much snow.  Just this past week we had snowstorm after snowstorm to add to the accumulation!  It has been a crazy winter!  Stay warm and stay safe!

What's the weather like where you are at?
Posted by 24 Paws of Love at February 19, 2019 4 comments:
Email ThisBlogThis!Share to TwitterShare to FacebookShare to Pinterest
Labels: Back Dogs, Front Dogs, snow, video

Wordless Wednesday- Sometime all you can do is 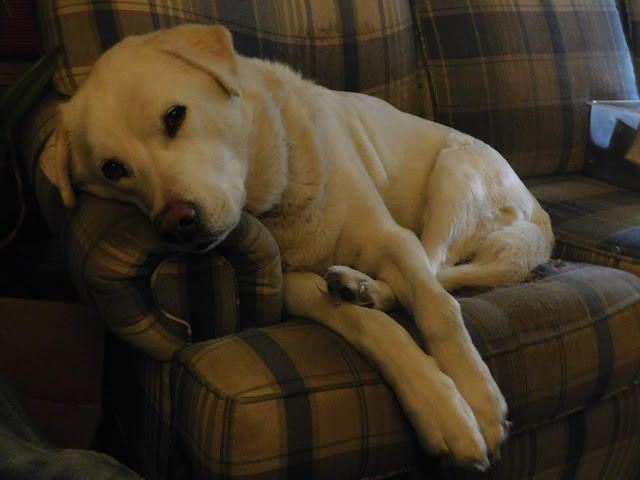 Chance sings with the Rolling Stones!

Every time the song, Sympathy for the Devil, comes on by the Rolling Stones  this happens with Chance... 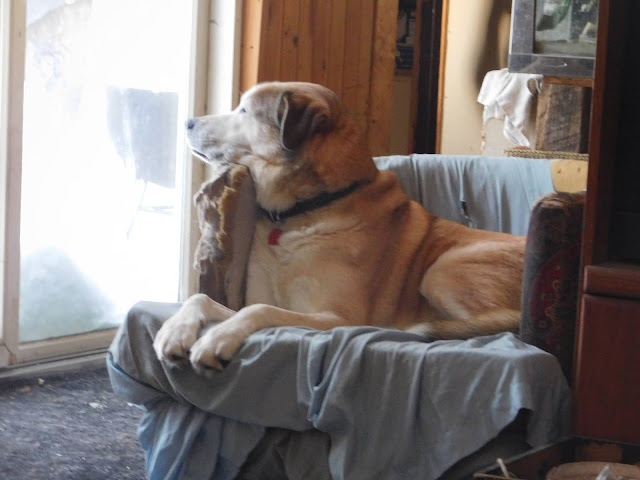 Dreaming of going outside again.

I'ma feeling so lazy and cozy and relaxed.  I haven't gotten to the weekly news this week.  Sorry we are late.  I don't like to be behind and then playing catch up.  It really bothers me quite a deal.  Then I get on the fence of whether to do it late or not.  It may not matter to anyone other than me, but that's OK, I'm the one who has to live with me.  But I didn't have any news this week, or so I thought.  I didn't think of it until the next day and the next day we were coming out of the polar vortex and one thing lead to another and now it is raining like a cold spring.  It's been tough getting through this deep freeze we've been in since before the polar vortex happened.   The poor dogs couldn't go out any longer than to do their business before their paws got cold.  Walks were out and all we could do was try to survive the bitter temps.  We did play some treat games and puzzles, but they never really satisfied them like a walk would do.   I was also getting quite antsy and was desperate for a walk myself that I almost took them near the end of the cold snap, but again they were lifting their paws from the cold and I don't have booties for them to walk in.  So we had to wait a couple more days. 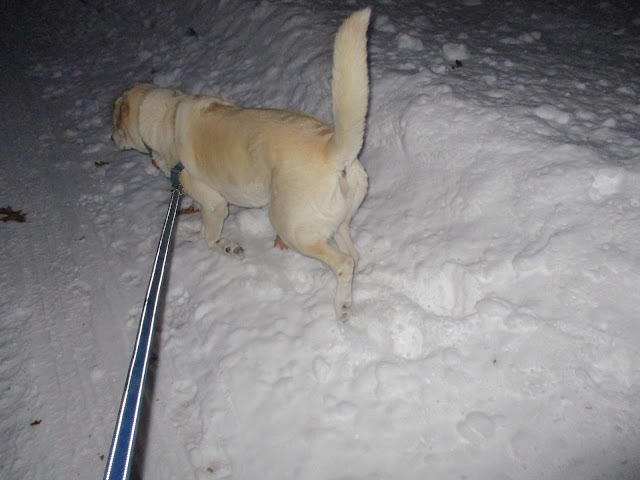 We finally got our walk in this past Saturday.  We were all a little rusty, but it felt good to get outside and stretch our legs.  We went for a medium length walk, so as to not over do it and everyone was happy. 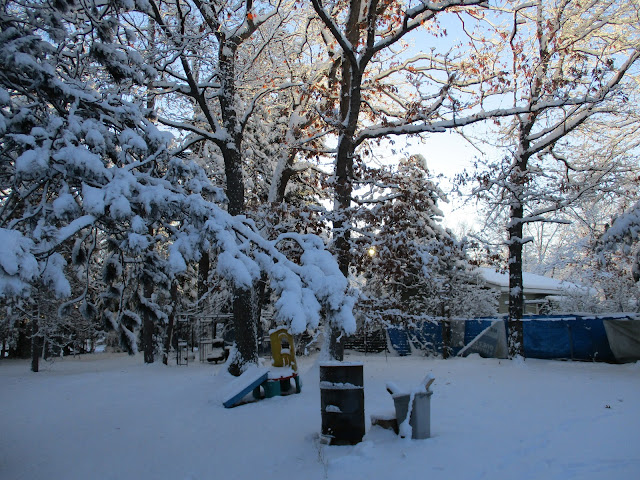 With the warmer weather came moving more firewood inside to the basement.  We went through quite a bit of wood over the last three weeks.  Amazing how quickly it all went. 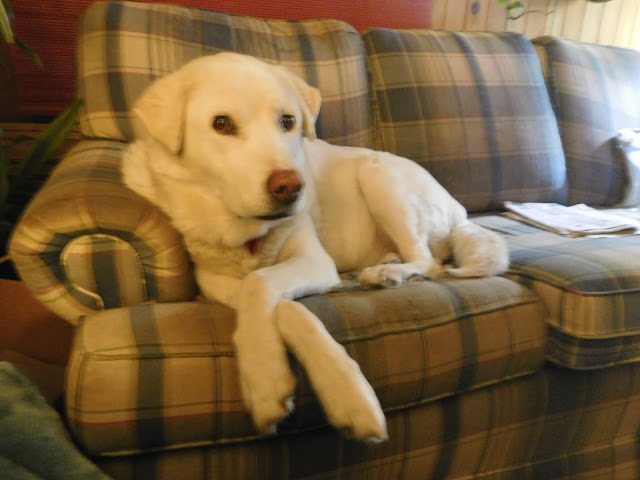 Paws crossed for a walk someday...

Fiona and I have had a new little thing we do together.  Before dinner time, we walk around the perimeter of the backyard.  Daddy Dog Brut and I used to do this all the time as he did his security detail and now I get the privileged with Fiona.

I'll admit it...it is so darn hard to stop feeding Chance his two favorite things, cheese and yogurt.  I broke down tonight while making dinner and gave him a tiny piece of cheese. I just couldn't deny him.  Eating was just one of those things we did together.  He and Blaze helped me heal when I was sick and couldn't eat.  Eating together made me get better faster.  This was when I discovered all the foods Chance and Blaze loved.  They had a wide palette, especially when it cane to vegetables.  But to see Chance mope around because we aren't having our little quality time together, just breaks my heart.  He really LOVES food and he has always been like that.  I can't help feeling bad for him.  Imagine having to give up your favorite food.  It's hard! 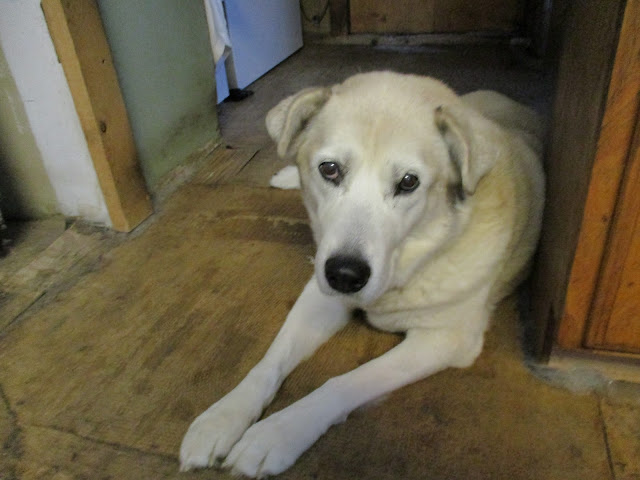 Polar Vortex are so boring.

We had our roof shoveled.  There was over a foot and a half of snow on it.  There was this pile in front of the house that didn't get cleaned up soon after and now it is solid.  It has become Blaze's soap box!  Oh, I wish I had a picture, but she caught me totally off guard.  She's yapping away and I came to let her in and there she is on top of this pile that's got to be 3' x 4', just swinging her tail, nose up in the air, carrying on to anyone that would listen.  It was too funny!!

How did you survive the Polar Vortex??