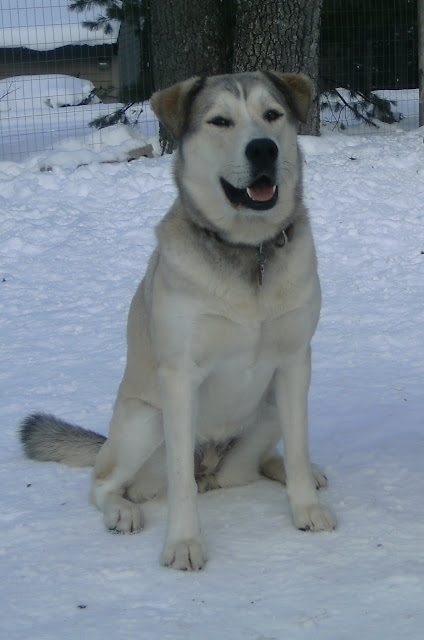 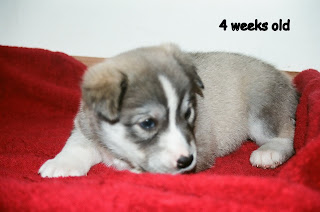 HOW BLAZE GOT HER NAME


Blaze got her name by the white blaze down her nose. It is faded now as she gotten older, but it is still there. Her new owners gave her a new name. When she came back to us at 7 months old, we went back to Blaze and she responded. 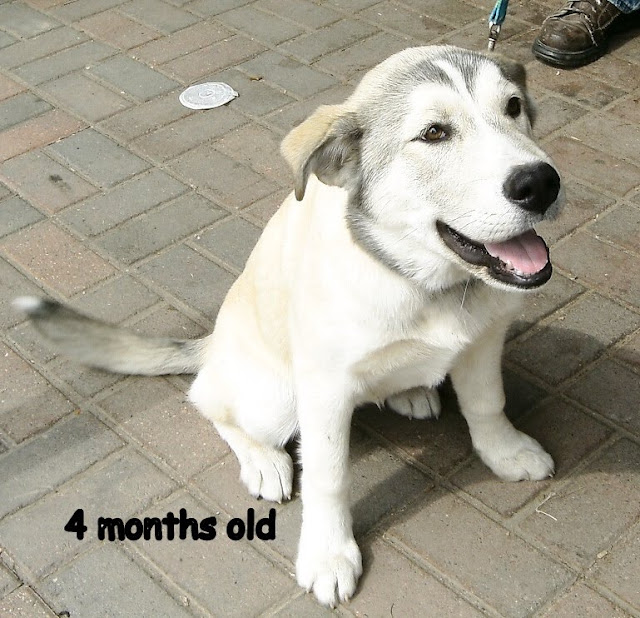 
Blaze was the only female out of the 3 Husky-looking puppies. She was tiny, but feisty. I remember thinking I couldn’t wait to get rid of her because she was such a terror in the puppy pack. I took back every word when we got the call from the new owners that they wanted to return her.

We had been visiting every couple of months for pictures and to see how she was doing. We knew something was wrong, but had no evidence. She was very wild and out of control, and would lay in submissive position if you came close to her. On our last visit (before she became ours again), she actually jumped in the car with us before we got out. She was ready then. 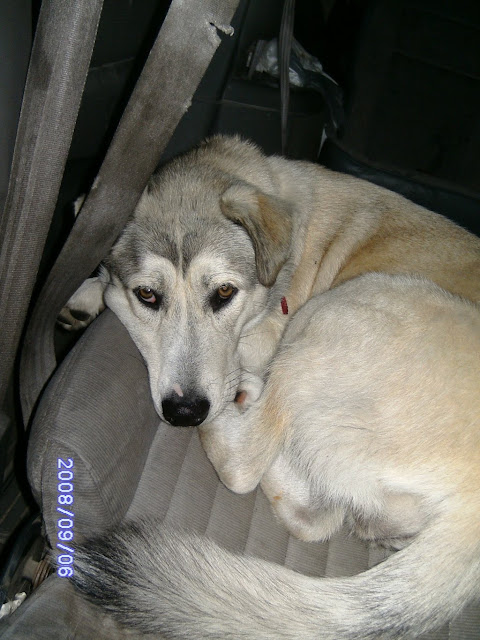 She was so tiny and frail when we brought her home. We cried every day for weeks. She was just a shell of who she was. It was horrific. We heard bits of information about what happened to her. Most had been hitting, kicking and locking her in a room for hours and hours, along with being shot at with a pellet gun. In her right eye the white is showing, probably due to being hit in the head.

We were unable to leave her alone, she went frantic being left in the only extra room we had (not knowing about her being locked up). Her anxiety was off the charts, almost in a constant state of panic. She would jump on all fours, on top of the counters and table and she had a high pitched anxious bark that could go on for hours. My husband took her to work with him, and she completely shredded our van. Mark and I would take turns sleeping with her, so she wouldn’t be alone, because the Back Dogs didn’t get along with her. 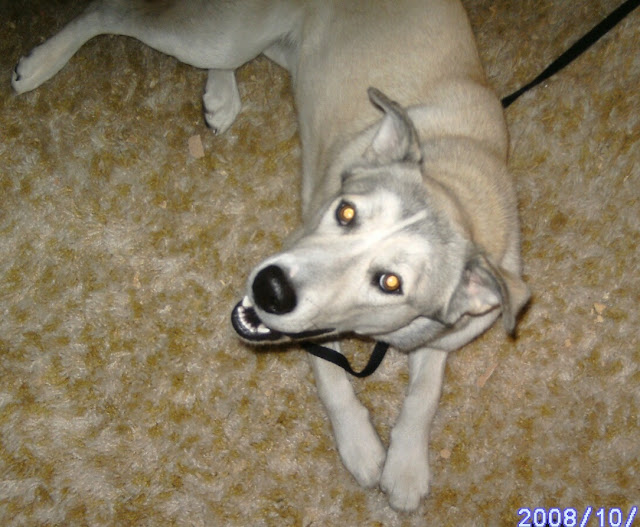 I began video taping her when I left her to walk one of the other dogs. Slowly there was improvement. The biggest breakthrough was when I noticed her looking out the window watching me leave and come back. This seem to calm her down. So I built her a ledge to look out the window and practiced leaving for short time periods, while video taping her to see how she would handle it.

Over time she began to calm and sink back into her own skin. She is well-behaved and listened fairly well. We were able to introduce her slowly to Zappa. They became best friends. We got them together as much as possible, so that she had a playmate.


The whole process was painful and very trying. There was never any thought of finding her another home. She had been damaged enough. The scariest part was seeing this young puppy born and cared for and then to see the damage done in 4 months. Frightening. 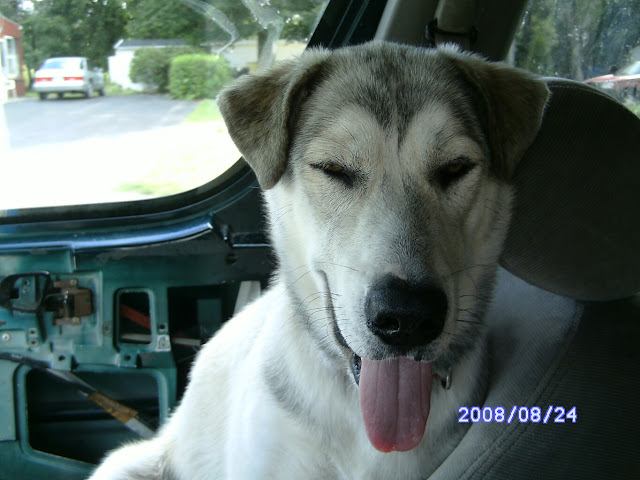 It will be 2 years Aug. 2010 that has been back with us. She is still a challenge, though her anxiety is curbed, it is still there. She has grown into a beautiful adult full of character. She is the only female out of all the litter that isn’t fixed and we may try to breed her someday.


Blaze has a lot of spunk and a quirky attitude. She reminds me of one of those cartoon dogs that is always running around, tongue hanging out, wagging their tail feverishly. Her ever-changing expression and behavior are full of wit and give her character. Mark thinks she is the most human-like of all the dogs because of her facial expressions. She is by far the smartest dog and will make an excellent lead dog. She is devious, sly and always trying to get one up on everyone. She has the same whiny, high pitch bark as Zappa and is persistent on using it. She is loving, playful, and likes to give 3 licks and a nibble. 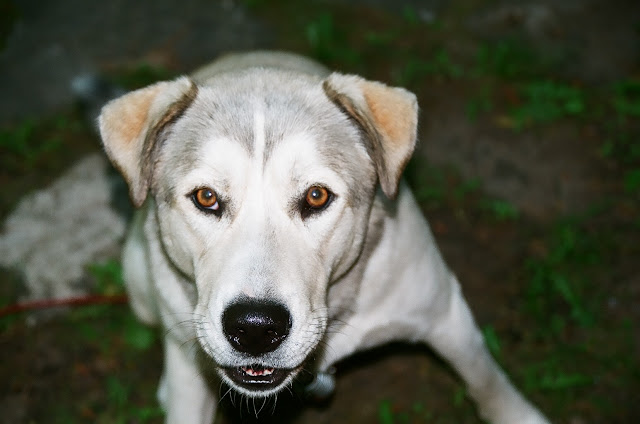 Talking. She can really carry a conversation with that Husky woo-woo. She has to run around the kitchen table before going outside, even if she is standing in front of the door. At dinner time, while I am getting food bowls ready she likes to steal bites out of food container.  She loves to lie on the dashboard waiting for Mark to come back to van.   She gets a kick out of flipping and chasing balls by herself. She loves to tease and antagonize Chance trying to get him to chase her.  Though her “first love” is Zappa as they were together during Blaze's first heat.   (Zappa is fixed)  Doesn’t matter that she is his sister in the dog world. They tend to have more of a courting ritual when he visits her since that time. Chance and Zappa are always fighting over Blaze. I think she loves the attention. 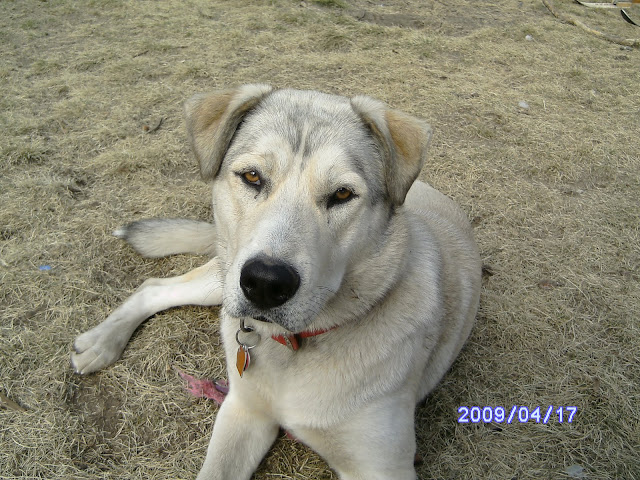