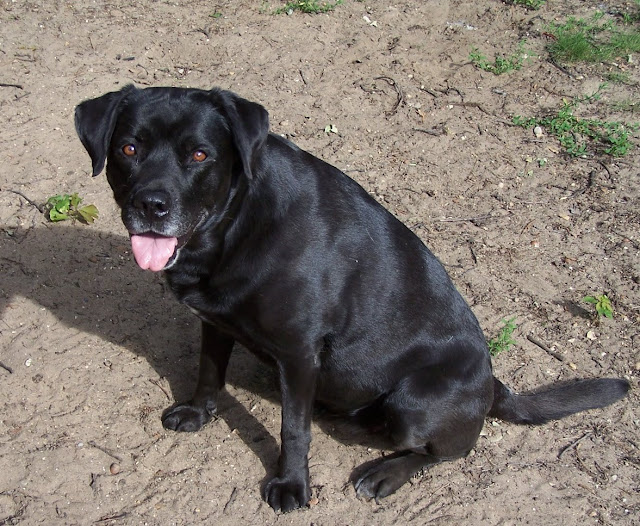 HOW SILVER GOT HER NAME


Silver is all black except for a thin white line on her chest, like a Silver lining. Hence the name, Silver 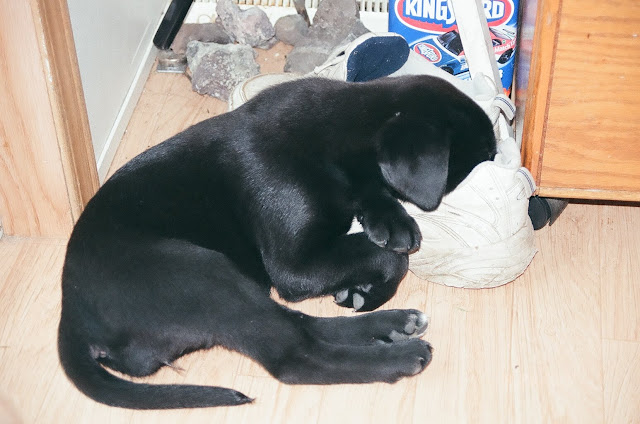 Silver was our first puppy together and we got her when she was 7 weeks old. There were 4 pups left in the litter, three were standing up to greet us and one was walking slowly on the ground. The three standing had large white splotches on their chest and white paws. I had always wanted a dog like them. Mark was taking special interest in the loner of the bunch. I really liked the other ones, but agreed to take her. We came to the conclusion later that Silver was the runt of the litter.

Before we were barely in the car, Mark was already talking about how great it would be to breed her. While I’m starting to freak out a bit at the fact that I haven’t had a puppy in 10 years and trying to remember what to do and what we need.

The black lab exterior hides the fact she a stubborn, willful, and independent Husky. I knew little about the breed and had difficulty understanding her free thinking nature. I remember trying to teach her to come on a long lead around 3 months old and she wouldn’t budge, even when I gently pulled her. I threw my hands up in tears. I had many instances like this that wouldn’t make sense until we got Brut, 3 years later. 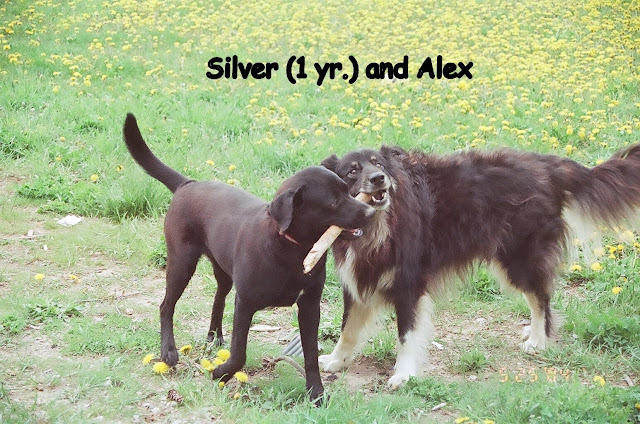 We had only Alex and Silver at that time and they became the best of friends. Even with Alex’s bad legs they romped through the fields, chased deer and other critters and did everything together. Alex was her “first love” (he was fixed) and when Alex died, it was a great loss for Silver. She moped, became moody and just wasn’t the same. On top of that she had to deal with Brut who was the complete opposite of Alex. Brut demanded so much attention that Silver lost the spotlight.

We still planned on breeding her. We tried a couple of times with a couple of different studs and nothing happened. That was how we got Brut. We decided to get our own stud and let things happen naturally. 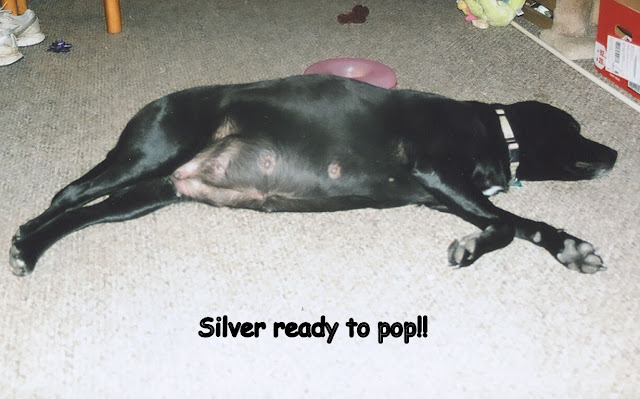 When Silver was 4 years old and Brut turn a year, we knew it was time. Her pregnancy went well. She was enjoying all the extra attention and special meals she felt she deserved as a soon-to-be-mother. She was happy. She had a bounce in her step and was content. It was so much different than after her other heats, when she started having false pregnancies when her body reacted as if she was pregnant and she was depressed, had little interest, and a low energy level. She had a very mild case of it, mostly mental and emotional. So when she was happy after Brut and her mated, we knew she was pregnant. 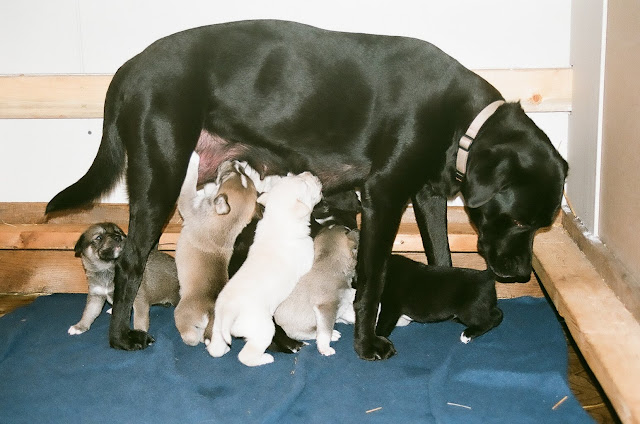 All the births went well. Despite having signs of false pregnancy behavior by hording a toy and she wouldn’t quite nursing, Silver was a good mom. We had to eventually separate her from her pups because she kept passing roundworms to them and it was getting mighty expensive to treat!

We got Silver fixed before she went in heat again after the pups. It was a difficult decision, because we were thinking of breeding her again. For the sake of her mental well being we knew it was for the best. Though now, 2 years later, we are not so sure. She seemed to fall apart after her surgery. Hair has fallen out in the thinnest places and she can’t wear a collar. She stills seems sad and depressed all the time. She has suddenly become more aggressive with other dogs and turns ferocious in the car to anybody we pass. There were some signs of this when she was pregnant, but it has gotten worse since getting her fixed. She was never that way before. 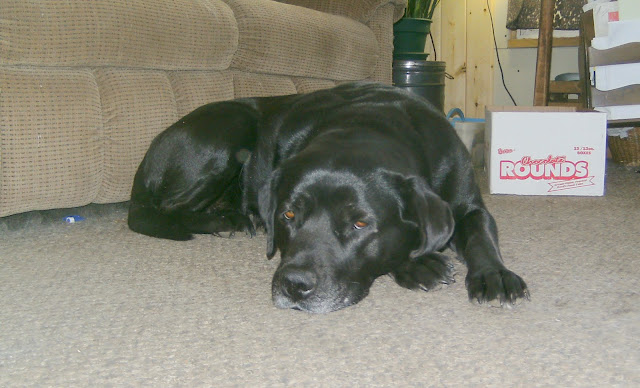 We have “oldest child syndrome” with Silver. Unconsciously, we tend to “expect more from her” and think “she’s the oldest, she should know better.” I don’t think we realize that we do it, it’s automatic.

Silver may have loved being pregnant and being a mother, but I don’t think she’s adjusted to having all the dogs here. She still wants that one-on-one time and now she has to compete with 3 dominate dogs for it. As evident when she is alone in the house, she starts pulling out her toys to play with me.

She is loved by all of the back dogs and will tolerate Chance and even play with him for a minute or two. 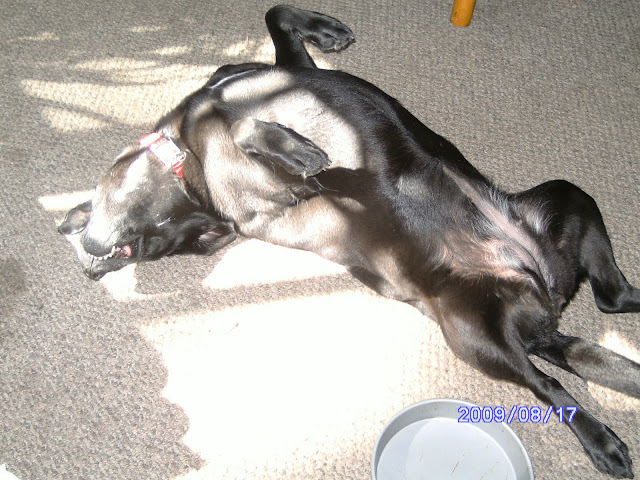 
Silver is the bipolar dog. As much as she mopes and pouts, when the mood strikes she comes alive. Her eyes will light up as she will flip to catch her tail or roll all over the ground shaking her legs this way and that. Silver has a mind of her own. She will comply but not without grumbling under her breath at something she doesn't  like. She is very motherly, nurturing and loving. She is also very sensitive and caring and can easily get her feelings hurt.

Silver is spastic over food. All the dogs love to go for walks, but Silver is fanatic about them. She was a hyper puppy and we took daily walks, sometimes twice a day. She loves putting Brut in his place. She also likes to show off by being able to outrun the back dogs, though Fiona is usually nipping at her heals. Her favorite toy is an old beaten football, that I throw and we both chase after. She loves games. I made up several when it was just Alex and her, though we rarely get to play them any more with the other dogs around. She is the lap dog out of the Back Dogs. She loves when I turn the music up because she knows it’s play time. 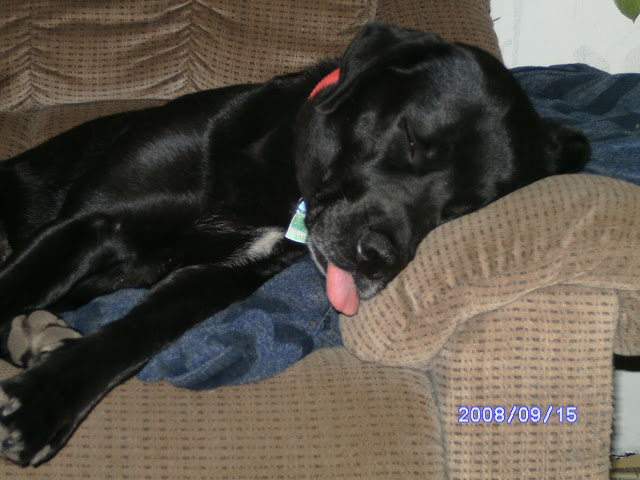