Monday Memories-It was about so much more...

Monday Memories-our little trip down memory lane.
Today's story is about Chance a pup from our litter who was neglected and abuse and then returned to us. 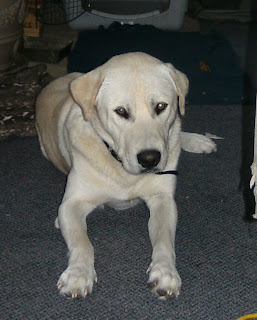 Chance's first day home
Dec. 16, 2008
You might be surprised but when Chance’s owners called us and wanted to return him, we weren’t sure about keeping him.  My husband was worried about me being able to handle another dog, when we were still dealing with Blaze’s return four months earlier.    We had struggle with introducing Blaze with the Back Dogs, how were we going to add another one to the bunch?   Everything was suddenly up in the air.  We didn’t know what we were going to do.  So we introduced Chance to potential new owners one night.

I sat on the floor with Chance later that same night after the meeting and wrote this:
:
Jan. 5, 2009
Monday

My husband and I have come to the conclusion there has been some kind of brain injury with Blaze.   We also witnessed some protective aggression with Chance and his potential new owners.  And it really makes me wonder on a much deeper level if Chance is meant to be here also.  Something about this info has given me a grave difference about things.  As it becomes more about their (the dogs) well being than I originally thought.  More than just taking care of them, but the fact they need us.  Much more than I ever supposed.  On a level I can’t explain.  It put things into a different perspective that I feel I don’t have the right or the want to question, having nothing to do with my needs.  Though mine are being met also with this awareness.  There is a reason they remember.  There is a reason why they feel safe and secure with us.  And there is a reason they are willing to sacrifice direct one on one that they are used to, to be here with us.  This is deeper than emotions.  There is strength and security and this is what they need and crave more than anything.  For some reason I thought Chance couldn’t stay.  There was no way.   And then I had fallen in love with him again but still I thought it best if he were to leave.  And now with this revelation seems deeply rooted that neither can go.  There is something stronger and coincidental that the two puppies that played together, growing up together, their families related and BOTH ended up back home.  It’s not really that big of a mystery.  They had already formed an alliance and it was only a matter of time.  They have a bond like Fiona and Zappa.  Unbreakable.  I can not pull them apart again.  I can not break that bond again.  They are both here for a reason.  That want to be here.  They know they are safe, even if it means less attention.

There is too much peace in this house, under these conditions for if there wasn’t, something would be horribly wrong.  Even if all the dogs were never able to get together, there would still be peace.

There is a deeper reason Chance and Blaze came back.  Came back from the same past.  What are the odds?  What are the odds?
Posted by 24 Paws of Love at May 07, 2012
Email ThisBlogThis!Share to TwitterShare to FacebookShare to Pinterest
Labels: monday memories, puppies

And bringing Chance back may have been the best thing for both him AND Blaze. You have done so well with all the dogs - more pet owners should have your dedication to making things right.

How lucky Chance was to have a second chance with you!

Montana might not be sure about having Copper back in his life, but Copper is sure of his love and where his home is. Montana and Michelle have a strong bond and Copper totally idolizes Chad, that when the 2 boys struggle at times to get past their own squabbles, they still seem to want to be here. We rescued a pair of brothers at 2 diferent times in their lives, Copper was abused and starved twice in his short life, Montana once...that working hard with them to be happy and well adjusted seems to override the fact that most dog training experts say it causes nothing but trouble raisng 2 brothers together. We are succeeding now that we know how to understand more and more what it is that causes their problems and how to change the bad behavior for positive traits. The right people, the right place, the right time, can make all the difference in a dog's and family's life. We love seeing success stories all the time.

Thank goodness that they both ended up back with you! What a bond...

I think dogs form a bond with their siblings that is just as close as humans. I don't believe dogs forget their home or family, human or four legged. They just adjust to their loss better than we do when they are given away to someone else.

There was a reason Chance and Blaze came back home, they needed each other and you needed them.

Chance was so furry lucky to have you guys, and I'm glad it all worked out in the end :)

I'm glad they both ended up in a safe place! :)

Your insight and willingness to provide the sanctuary that each pup needs is awesome. Always trust your heart.