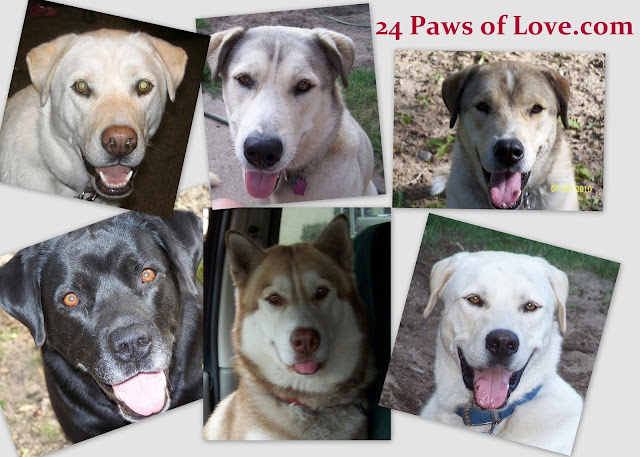 Things settled back to semi-normal today with the dogs and cats after recognizing Brut's second anniversary since he left us.  Chance was still a little quieter than normal, but then I was still tearing up on and off through the morning.  I don't remember much about that next day after Brut died, but I felt the ups and downs today.  So glad there has been some time in between, some space to lessen the blow.  I don't ever want to go through it again.

I feel so blessed with the puppies we have and I am ever grateful to have them here under our roof, safe and loved.  I can not begin to tell you how much the four mean to us and especially that Chance and Blaze came back to us.  I can't put it into words or feelings I am just so humbled before God that we have them.   They are such a blessing.  A miracle.  For I have no control what happens to the rest of the litter, even with the two puppies we visit every now and again, but these two Chance and Blaze are safe.  They are here.  And I am forever grateful that we were able to keep Zappa and Fiona and then Chance and Blaze.  I can't even begin to describe the beauty of that alone.

I can't begin to count the number of times in my life that I have been suicidal and felt like a burden to the dogs, or thought they would be better off without me.   The sufferings of PTSD from childhood abuse have almost destroyed me where I was taught I would never make a good pet parent. Every day I learn what a good dog mom I really am, in spite of being told different and killing myself would devastate them.  Not to mention they would never understand.  I never thought thought the dogs and cats would mourn with me on Brut's anniversary except I witnessed it for myself.  I can't imagine what it would be like for them to lose me too.

It takes a lot of courage and strength to live, but being surrounded by so many blessings, softens the blow and gives me a wonderful and beautiful reason to carry on and a reason to love.
Posted by 24 Paws of Love at June 17, 2017
Email ThisBlogThis!Share to TwitterShare to FacebookShare to Pinterest

Yes, it does take a lot of strength and courage. And you are a powerful person and always there for the dogs who rely on you.

Coming from such a strong woman herself, I am so honored to call you my friend. Thank you for your kind words. :)

Dogs can read our emotions, if you're sad, they can tell. They need you, just as much as you need them.

Your family is your anchor...and you are theirs. It is that sharing that we are able to muster what we need to not surrender when all seems overwhelming. Hold tightly to each other, believe in the power you form together, and march on knowing you have been blessed to have such support.