There have been many advantages and disadvantages to living with two packs of dogs.  Not exactly my dream situation, but we've learned to manage our time and attention with both packs by balancing between the two.  If you add our two cats, it is actually three sets of pairs we are dealing with.  For whatever reason they can not all get along together.  While there are a few exceptions, most of the time they have to be apart from each other.

I don't know if I could do this again when the next phase of our lives comes.  Maybe for temporarily purposes but not 11 years worth.  This whole plan of dividing the dogs started as a must, only to find out after years of trying to bring the two dog packs together, that it was not going to happen.  It is still hard to admit that now.  I had doubts, but I also believed in the possibility of they could mesh as a unit.  While lack of socialization is part of it, the bigger influence comes down to Daddy Dog Brut's genes and the way he was raised with aggression.  Because Fiona has no reaction when we run into any other dogs out and about, yet is the vicious one with the Front Dogs, Chance and Blaze.  Fiona will attack.  And has been that way from the first day Blaze came back to live with us, after her owners returned her.

For the most part I accepted life with two packs and for the most part the positives outweighed the negatives.   Though there were many times when I was following other bloggers or knew of people around me that brought new dogs into their home with skill and ease that I couldn't.  No matter what I tried, read, or witnessed, I couldn't change Brut's aggression and that it was passed on to his kids.  They were never going to accept each other.  Even with the "help" of a trainer and a behaviorist  I found I was further along without them.

And so the beat goes on...going from one side to the other, taking turns when there are treat games and the ruffling of furs at the separation door.  It is the never ending saga that is our life right now.  It is trying, it can be very difficult and sometimes it is no fun, but to have all four dogs in our lives...priceless. 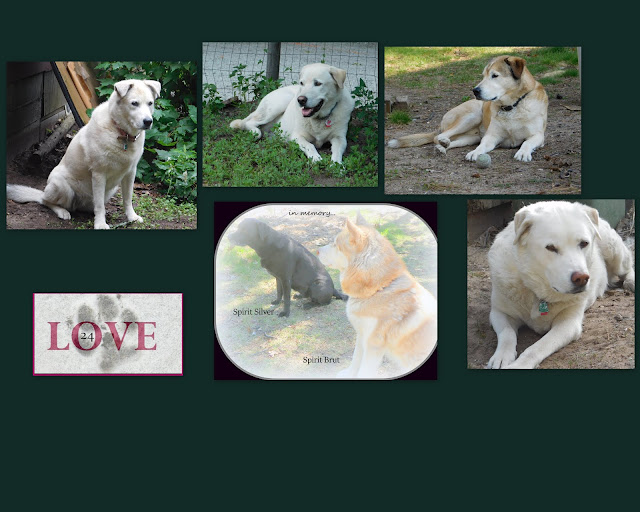 Posted by 24 Paws of Love at July 15, 2019
Email ThisBlogThis!Share to TwitterShare to FacebookShare to Pinterest
Labels: Back Dogs, blending of two dog packs, Front Dogs

I don't think you should blame yourself so much for not being able to bring the two packs and the cats together. Dogs have their own personalities and strong opinions. It is definitely better to have dogs that are apart than to have them fight with each other. We were also hoping our two dogs would get closer and play together and be friends, but there is still a competition there. They have fought a couple of times recently too, over food or attention. You really can't force love and acceptance.

Awww, thank you Lavi. I"m so sorry to hear there is friction with your dogs. I know it very well. It just would be nice to have them all together, ya know. Sometimes it is hard, but I know it is better this way. Good luck with your two.

It's so tough, glad you're able to make it work. We deal with this on a visit basis, not every day at home.
Relic HATES my parents' dog, so we have to keep them separated & keep Relic on leash in the house and yard. Griffin does not read body language at all & ignores the fact that Relic walking away, growling & then snapping means he doesn't want to play. He crushed Relic into the lawn once so Relic bit him hard on the nose & drew blood. Griffin has been scared of Relic ever since. He'll still bark & whine to get Duke to play, which makes Relic lunge at the end of the leash. There is no way the dogs could stay together unsupervised.

Sometimes you just have to work it out with themselves. It is very hard to having two different packs at once living together. Thanks for the share. Have a wonderful day.
World of Animals