How is Chance doing? 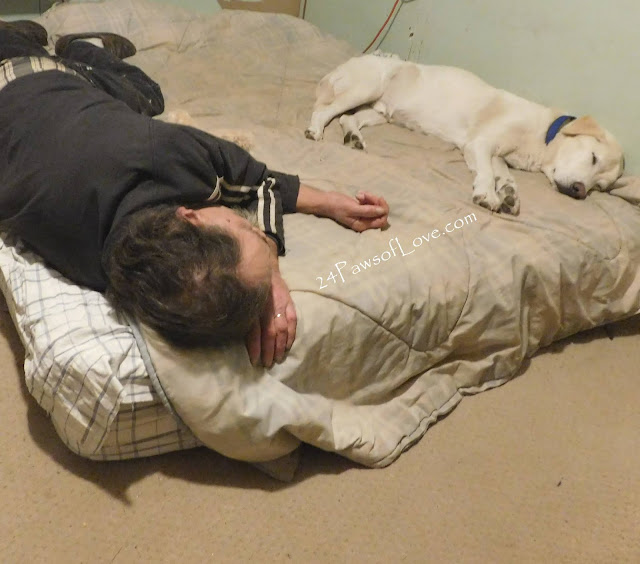 And the boy likes his space.  I'm surprised Chance lasted this long and this close to Mark, so I could get a pic.  lol  He jumped off after I snapped!

Chance is doing pretty good, considering he has liver cancer.  He seems to be in some sort of remission as he isn't getting better or worse.  He hasn't lost any more weight.  He's thin but looks like he gained some muscle.   We started walking him every day, as opposed to every other day like we were, to help with his high anxiety.  He's been eating his meals in full and all necessary business is good.

We started giving Chance CoQ10 a few months back.  I had read that it may help in shrinking the tumor and was also good for his mental and emotional state.  Maybe it's working.  He is quite alert and responsive.  Definitely can't hurt him and maybe it is why he's in remission.  Who knows!?

Chance has always been like a race horse coming out of the gate when we used to go for walks.  And was still pulling me along up until about three weeks ago.  I used to have to speed up to stay behind him and now I have to slow down to walk beside him.  I don't think he likes me sharing the lead with him, he is used to being the lead dog.  So sometimes he turns his head towards me telling me to get back.

For those who may be curious what we are feeding Chance, really, anything he will eat.  For meals, he finally settled on cooked chicken and his prescription canned food, because he won't eat the dry anymore.  My Mr. Veggie lover, will hardly eat vegetables any more.  He used to love almost all veggies.  I don't know what cancer is doing to him, but he will hardly eat them any more.  The good news is that he will eat almost anything else, so we haven't hit that stage of not eating yet.

Chance does have some bad times, in the morning and in the mid-evenings.  He isn't a morning dog and can look pretty beaten down.  Like he's lost all hope.  He mostly sleeps through the morning.  In the evening he tends to be very unsettled, has a hard time lying down and paces quite a bit.  Like he can't get comfortable.  I don't know if it is the tumor or his arthritis in his hips and back, or if he has anxiety about something I don't know.  It really tends to ramp up after dinner, and may or may not settle down by bedtime.

When we had the ultrasound done in September 2020, and discovered the cancer/tumor, Chance was doing really good at that time.  Our vet said that he might live for 6 months to a year.  March 24 will be 6 months since she made that prediction.  So far, so good.  We are just grateful for every day with him.

Thanks for the update. Whatever you are doing, keep at it. And the love you have for him will be his greatest medicine.

I hope you have as much time left with Chance as you possibly can, you are doing great with him. I have also heard great things about CoQ10 for humans and know a few people that swear by it. How is Blaze doing, does she still spend a lot of time with her buddy? Maybe you could do a post from/on her and how the changes with Chance are affecting her?

I am glad that you are having this peaceful and loving time with Chance. I know that feeling your love is helping him enjoy each day. I am sending Chance and you lots of love.