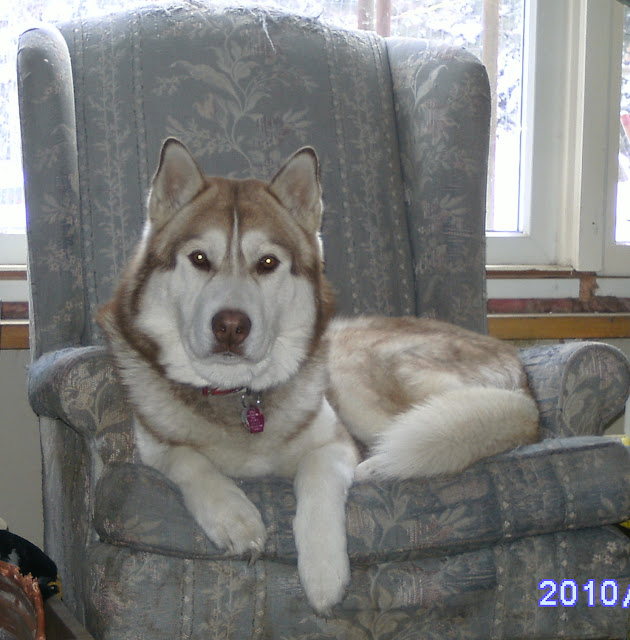 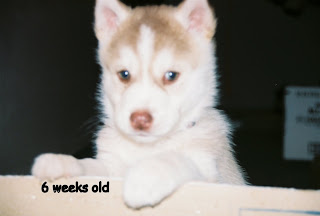 HOW BRUT GOT HIS NAME


The breeder gave him the name of Hercules and for good reason, he was the biggest puppy out of the bunch. Mark actually named him after the men's aftershave of the same name. Little did we know that Brut would live up to the real meaning of his name and then some.


We needed a stud for Silver, after a failed attempt with a breeder’s dog, we decided to get our own. This breeder had a litter of pups 4 weeks old. I had my mind set on a black one who had a black mask.  When we went to pick out our new puppy, the black one was already spoken for. Then he held up Brut. He was the exact opposite of what I was looking for yet I was locked on him. Everything in my being told me he was the one. I couldn’t have changed my mind if I wanted to. Two weeks later we would take him home. 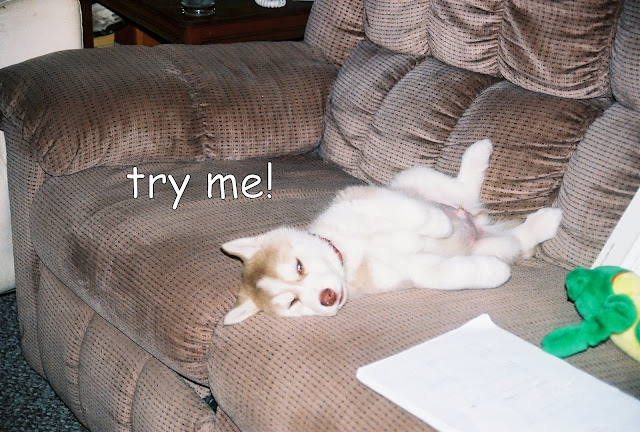 In those two weeks, Brut was brought inside apart from his mother and placed with large adult dogs, where he learned early to fend for himself.  This was quite apparent in his possessiveness about food and toys.

Bringing Brut home at 6 weeks old was due to a miscalculation on our part.  Looking back it was probably the best thing for Brut as the earlier we were able to work with him the better.   He had the look of a wild wolf in his eyes and a stance of over confidence. He walked around like a bully, daring the cats and Silver, but never with Alex. Brut hung very close to Alex, as if being taken under his wing. 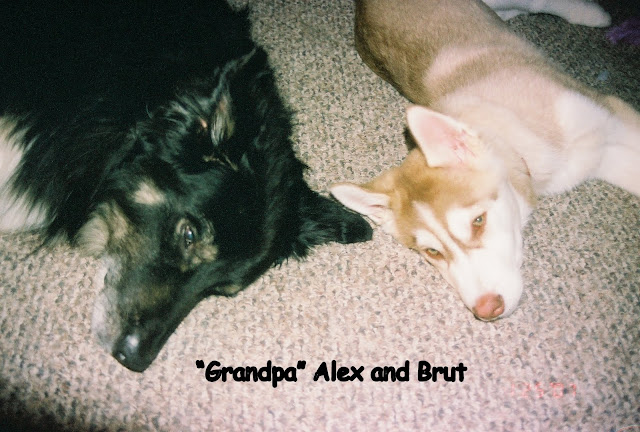 Brut was the most challenging dog we have ever had. I actually feared this little puppy, that’s how wild and crazed he was. I thought we were dealing with dominance issues, especially with food, and I treated him as such.

Brut was extremely hyper, anxious and sometimes in a panic. When I discovered clicker training, I found the miracle answer. He could be bouncing off the walls and clicker training stopped him in his tracks. Ignoring him until he would respond better also helped, because he demanded so much attention. I was beginning to pull my hair out with potty training. He gave no warning signs at all and had to go almost every hour. For some reason he only pooped in the house once, after that he always went outside. 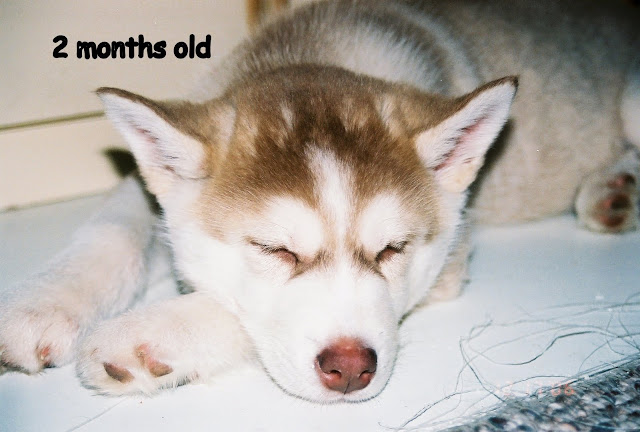 We worked out a number of issues with him as he grew and became more mature. We found out by running into the neighbor’s dog when Brut was 6 months old, his aggression towards other dogs. Our walks together were a little more intense if other dogs were out.  His aggression is slowly working itself out.

When Brut became a father, we were cautious with him and his new kids. Turned out, he was an excellent father. He would get right into the whelping box and help clean and care for the pups.  He would run, play and roll on his back, letting his pups crawl all over him. When the pups would get a bit overwhelming for him, I would let him out of the room. We were so proud of him. 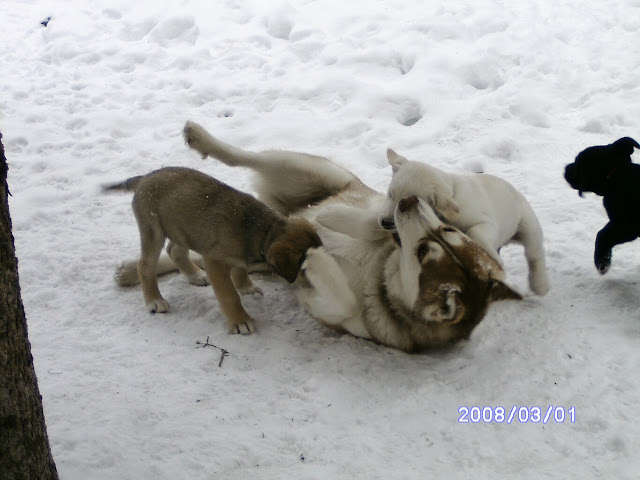 When the puppies were 4 weeks old, I became well aware of the impact that was made on Brut's puppy hood situation. Others would disclaim it didn't have any bearing on his aggressive behavior, but I had witness it first hand and have no doubt the effect it had on him. Even if it only help to tap into the source, it played it’s part.

When all the puppies had homes and Zappa and Fiona were to stay, the real challenge began. Fiona would submit to Brut instantly. Later as she gained confidence she learned when to submit and when she could play. Zappa was a different story. He would stand up to Brut. Even if he was lying down, he bark and lurch at Brut and Brut would press harder. Nothing serious ever happened, but I had to keep a close on them for most of that summer. 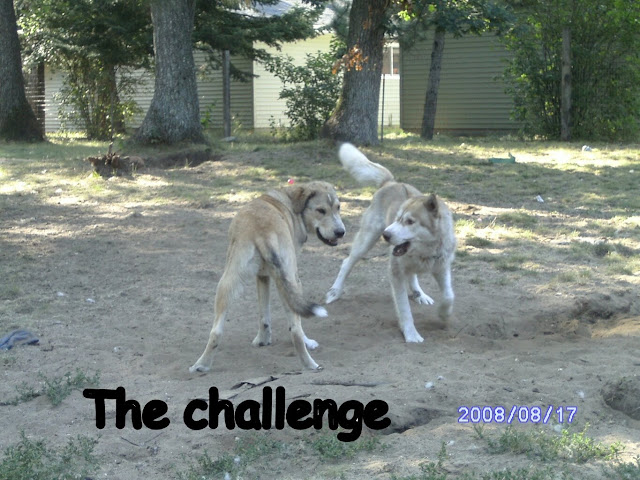 Then when Brut turned a year and a half old, most of the serious fighting and challenging began to let up. Zappa and Brut must have come to some agreement and the challenges was few and far between. They actually began to play and chase each other, especially when Fiona wasn’t around. They seemed to have a silent peace treaty and respected each other.  I had a trainer tell me I would have to get rid of one or the other because things would only get worse.  I have seen each of them back down to the other. Their new game together now is chasing squirrels.

Brut is my dog. We have learned to communicate without speaking. He is my running partner. There have been many times when I’ve let him take the lead and guide me where we are going and vice-versa. This has been not just in the physical sense but mental and emotional. We have come to understand each other immensely, as our brain waves react differently than others. Our bond is very strong and we have learned a great deal from each other.  I read that aggressive dogs can be compared to being bipolar and that was something I understood all too well. 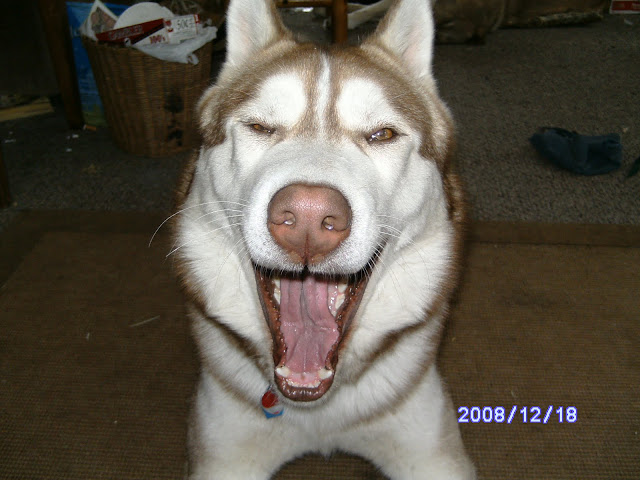 IT STARTED WITH HIS RIGHT EYE...

A hemorrhaging we discovered in his right pupil at the end of March 2015.  Brut was treated with steroid eye drops, which did help temporarily.  After two visits with our regular vet, she set up an appointment with a doggie eye specialist who thought the bleeding was from hypertension.  There was no questioning that Brut had been hyper and high strung all his life and this seemed to be the answer.  The specialist gave us blood pressure medication and we thought we'd found the answer to our problem.  Little did we know of the horror we were to find out after a week of the medication or how our world was stopped cold.

Brut was lethargic and weak.  He had vomited violently the day before and didn't want to move at all.  We called the doggie eye specialist, he told us to bring him in.  We scrambled to borrow a car, as we only had an unreliable single cab truck, and took the four hour ride to the ER clinic.  This is where it was discovered the root of medical issues, a tumor on the spleen that was bleeding into his abdomen and filling it with blood.  The whole experience with the doctors, nurses and staff on top of the news we'd just heard was a nightmare.  Our options were to operate (if possible) or euthanize him.  We couldn't afford the surgery and we were asked if we wanted to put him down, stressing the word 'humane' as if any other options was not.  We refused treatment or killing him.  We took him home.  It was not Brut's time to go and I'm glad we recognized that.  Brut had too much life left in him.

The next month was a blur.  Brut went up and down, from being just fine and acting normal, to quiet and weak.  We went back and forth with the blood pressure medicine, but eventually quit as when he was bleeding internally, his blood pressure would plummet.  Our regular vet said that Brut may just bleed out and die in his sleep.

June 4, 2015 we finally had x-rays done of Brut.  He had about 2-Liters of blood in his abdomen and was so full on the x-ray that we couldn't see the spleen or liver or the tumor.  We still didn't know which it was.  She gave us a month for him to live.

Mark hadn't given up hope that something could be done.  On June 16, 2015, he told Brut, "If you want me to let you go, I will."  The next day, Brut who hadn't shown any outward signs of pain, except that an old dog, started having short and shallow breathing.  The following morning, the breathing was worse and so was Brut overall. Brut was suffering.  On June 18th, 2015 we called our vet and we held him for the last time.  Mark looking directly into Brut's eyes, while I held him from behind and we said our good byes to the dog that didn't just change our lives, but had transformed us. 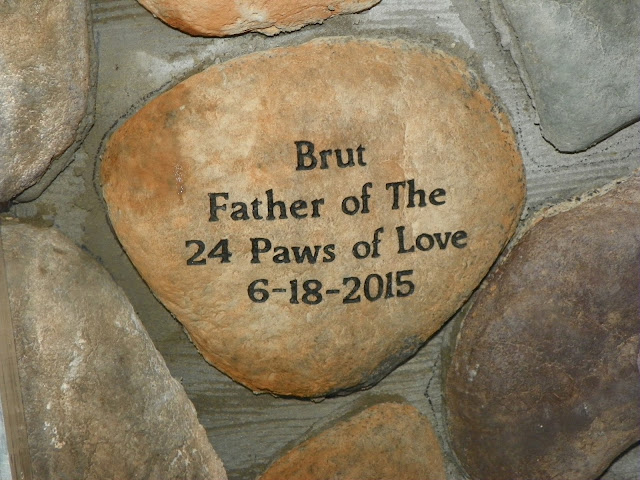 Memorial Stone we purchased at our local vet's office, that is part of their outside wall.


Brut is the enforcer. Everything runs according to his agenda and he makes it his business to be aware of everything. When Brut isn’t there, Fiona takes his place. He is an excellent guard dog. Brut is a very proud dog and is evident is his erect posture and prance. He is dominant and possessive with what is valuable to him. He is also very intelligent and conniving and uses both of these to get what he wants. He is devious in a playful way and very cajole. He is also quite independent and strong willed but will listen to me.   Brut has a big heart and is very sweet and loving.


Brut loves Silver. He is always trying to get her to play and chase him. Brut is also a fanatic about walks, because we went for so many when he was a puppy.  He loves food and will do anything for a treat.  He loves to tease and taunt Zappa.  Brut is always trying to push his buttons.  If he can't get Silver to chase him, Fiona will.  He loves doing our homemade agility course and he is excellent at being focused and following directions.  He loves to keep the neighbor's dog in check and guard the perimeter. 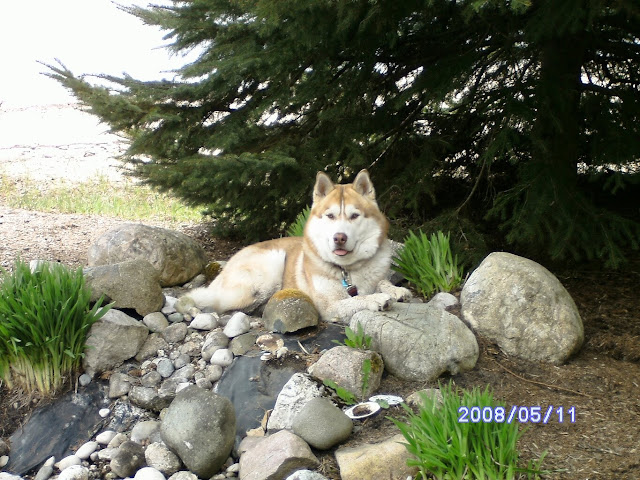 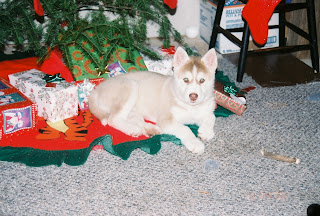 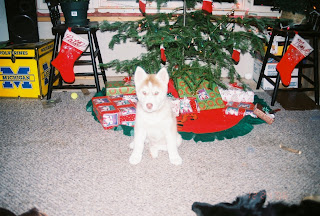