What have we been doing??

I've been spending quite a bit of time with the Back Dogs recently.  For those of you who are new and may not know, we have two separate packs of dogs, the Front Dogs and the Back Dogs and recently the Back Dogs have been getting a bit more attention.  It isn't conscious or for any particular purpose except enjoying the gobs of peace and harmony between the four of them.

It has been almost a year since I noticed the two packs start to settle down within their arrangement and routines.  It is a place I thought I could have only dreamed of.  Now almost a year later, there seems to be even more contentment as we have continued to work with Brut and his aggression that is bringing such positive and longer lasting results and is also being felt throughout both packs.  It has simply been amazing.

My directness has been focused on the strongest formed pairs:  Brut-Silver and Zappa-Fiona.  And since Chance and Blaze only have each other, they are quite advanced in this area.  They have also had almost my full attention since they came back over three years ago and now it is time to turn the tables.

I've been using little cups of jello or veggies with the Back Dogs, so that they can try some new foods.  Being that Chance and Blaze have the advantage of being in the kitchen, they are spoiled in taste testing and I figure the Back Dogs need a good shake at trying out some new foods.  This is also teaching them to take turns and being less grabby with food. 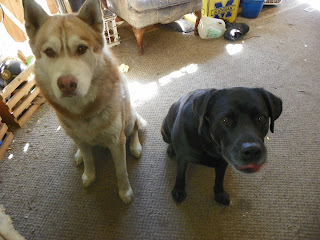 Can you keep an eye on Ms. Grabby??
Would you believe of Brut and Silver with Brut have the food aggression I have a bigger problem with Silver?  She doesn't seem to care that it is Brut she is dealing with and will push her way closer to him and try to snatch anything of his that falls.  You'd think she was starving and thinks every scrap of food is hers even if it is  Brut's.  Brut on the other hand has laser focus on the food and when I feed him jello I use a spoon so he has to think a little bit about what he is doing.  A lot caution goes into when I work with them two.  Studying their body language and quick reflexes has kept everything very positive.  :) 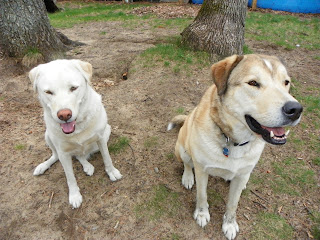 Zappa calculating snout to snout closeness with Fiona
Fiona can be a bit food resourceful as well and she likes to keep Zappa at bay.  I don't force Zappa to come any closer than he is comfortable.  He can be so skittish that he will opt of the whole thing if he doesn't feel safe, so I let him choose his place as long as it is within reach.  Fiona has learned a great deal in a short amount of time about taking turns.  Something she wasn't very good at.  She's so much like her Daddy Brut in that way, but what I have witness between her and Zappa has been amazing. 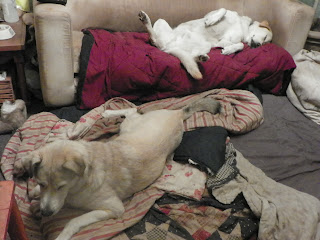 Did she say we get the summer off?
And since the Front Dogs, Chance and Blaze are levels above the rest of the family, for now I am just enjoying what they have achieved so far.  I really haven't thought much about where to go next with them and I'm really doing great with that.  They have had me to themselves for so long, it is time they let their parents and siblings do some catching up!  I'm sure there is something we all need to be working on and when it comes it will be the right time and place for it.  Just as everything we've done has been.  It is so nice to sink a little further in my chair and relax as each day goes by.  Yes, the 24 Paws of Love have already leaped mountains, now it's time to climb a foothill for a while.  :)
Posted by 24 Paws of Love at May 04, 2012
Email ThisBlogThis!Share to TwitterShare to FacebookShare to Pinterest
Labels: aggression, Back Dogs, food, Front Dogs, guard

Our resident dogs keeps changing as Mom brings new rescues into our home. Sometimes one of the rescues isn't very friendly with one of us (me and Bella and Sable), but most of the time we get along pretty good. Mom does a good job of identifying potential problems and things are pretty peaceful most of the time. Unless you count rough, play-fighting as upsetting! ;-)

Have a Happy and PEACEFUL Summer!

You guys looks you're enjoying what you're doing.,

I have never tried Jello with the dogs! That is great! Glad to hear the Back dogs are doing well with trying out new foods!

Jello does sound yummy. Say hi to the back dogs (and the front dogs) for me!

Most people would have given up on one pack or the other. It's not always easy to deal with multiple dogs in the family. Each one different than the other and with their own ideas sometimes. But they are family and you do what you have to do to keep family together!

It sounds like you've got a good idea about where you want to go with them! :)

What a nice post...you've done well with your packs by recognizing their differences and focusing on their strengths.

I've found that Sage is not one for veggies, so more power to you!

Although I know it wasn't your intention to have two dog packs, it appears to give you a whole new way of seeing dynamics and relationships between the dogs and within your family.

I hope you enjoy the foothills for a change. :)