Blaze and this round of False Pregnancy 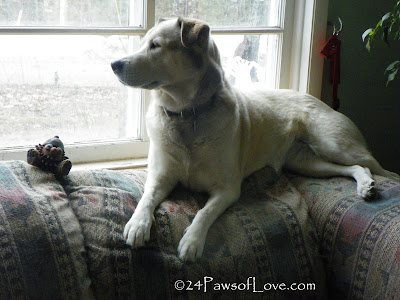 Ever since Blaze came back and we discovered she was the only girl out of the litter who could have puppies, we knew that we wanted to breed her.  We like the make and model of our dogs and wanted to carry on the 24 Paws of Love line.  And hopefully create a sled team with the litter.  But after the false pregnancy that Blaze is going through, I'm beginning to think twice.

A false pregnancy is when after the heat (ovulation) is over, the body and mind act like their is a pregnancy even when there isn't one.   It can be psychologically difficult on females depending on the severity of symptoms.  Physically females can have large and swollen teats, sometimes so much that they produce milk.  Physiologically the dogs believe they are pregnant and may eat little or not at all, begin nesting behaviors and horde toys with a sense that these are their puppies.  They may also become depressed, lack energy, become moody and some may go the extreme of becoming aggressive   It is still up for debate whether false pregnancies are hereditary or if they are a natural part of the cycle of a female dog and some don't even believe it exist. 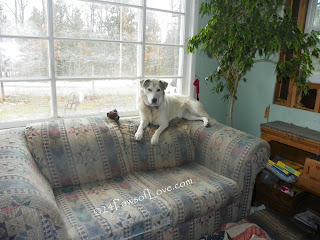 Blaze goes into heat twice and year and follows with a false pregnancy that last about as long as a normal gestation period of about nine weeks.  Her mood will become low and depressed like.  She will also become more affectionate and clinging during this time as though she would rather cuddle than go out to play.  And in the last few weeks of those nine weeks, she has a toy or two that she casually carries, guards and keeps around.  She has no problem leaving the toy inside or out and doesn't need to keep it close while she she plays, eat and does her business.  Her mood begins to lighten during this time period and she is a happy girl pretending to be a mom as the last of her symptoms will finally lift.

But this false pregnancy turned on a switch once she found her toy.  She hasn't been able to leave it.  She almost can't bare to part with it.   If she does move she carries it and then as in a state of confusion because something simple like sitting at my feet at dinner (like she does every night) is compounded by the fact she has no place safe to put the baby.  So she goes back to her bed and sits with it.  She carries it out to take of business, very quickly.  Only to non-stop whine in worry when she wants back in.  Suddenly this toy, her baby has taken on a totally different meaning from before and I don't know what caused the switch.  There weren't any signs leading up to it and all of the sudden that baby is the most important thing in her life.

She is still eating, drinking and going outside, which is good.  The only thing that was different was her heat 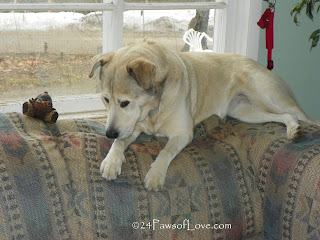 cycle.  She didn't really have one.  I don't know that she ovulated because for as much as Chance tried to mate with her (don't worry he's fixed) she never swung her tail to the side to let him gain entrance.  It was like she went through the cycle, but never ovulated or went into an actual heat.  And at five years old, I've notice each of Blaze's heats are getting shorter and lack the potency they carried in the beginning.

This extreme of this false pregnancy lasted a week, where she couldn't stand to be parted from her baby.  It was pretty scary because this isn't the Blaze I know.  And it would be a factor if she were to get pregnant because she may be more obsessed with the toy than care for the puppies.  Silver went through the same thing before she got pregnant and after she gave birth.  She ran all over the house and digging at the floor trying to find her toy that we had taken away from her since we didn't know what the toy meant.  It took us a couple of days to finally realize it was part of her pregnancy we finally gave the toy back to Silver.  Although the intensity was much lower than what I'm seeing in Blaze, Silver never once neglected her puppies and still took good care of them.  Dogs have been known to abandon and neglect their puppies because of mixing false pregnancy symptoms with a real one.  At least with Blaze we would be aware of what to look for if we were to breed her.

So Blaze is still carrying her toy around, but she can leave it somewhere and come back for it later without being in a panic.  Her mood has lightened, she happy and content and doesn't seem possessed by the toy.  So that is a relief.  We are just going to let things play out right now before we make any decisions about anything, but for now we are just happy she is OK. 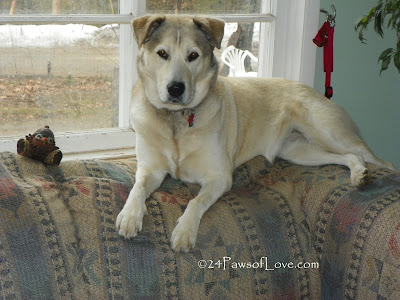 Oh wow. I'm not sure I would know how to help a pup going through that. We thought we had a pony with a false pregnancy, but turns out she is pregnant, just a month and a half over due. Good luck!

Awwww...how hard that must be for her (and you). It's so good you are there to help her through it.

We deal with some of those issues with our Puff, our only intact dog who is 15. Her cycles seem to be getting erratic as she gets older although dogs do not go into menopause. Have you had her checked by the vet? Intact females are at higher risk for several diseases and should be monitored starting at about her age. Don't think there is cause for alarm but just to make sure.