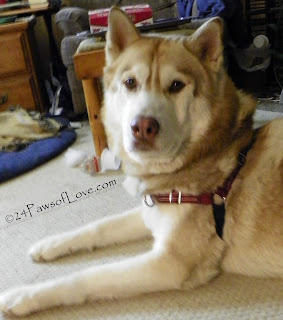 Had a great walk with Brut tonight using his no pull EZ Walk Harness.  Man, I can't believe how great the harness and our training is working hand and hand.  I'm still using treats through the whole walk and learning how to utilize them even more to my advantage.  Now when Brut just gets to the end of the leash he automatically turns and I click and reward.  I've been clicking and rewarding for him walking by side and turning his head at me as well.  I can't believe how well this is working out.  If I hadn't taught Brut a mark point at the end of the leash, I would be pulling against him to turn, but this way teaching him that mark means he is turning on his own.  And when he does pull a little ahead or to side, he turns willingly when I tug on the leash.  It is better than I could have dreamed. 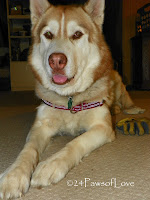 We have also been practicing when we pass dog houses I make him walk next to me by making a feeding tube out of my hands.  A handful of treats that he has to work for to get while still walking right along.  We have yet to encounter a loose dog in their yards, but I am feeling ready for the test.  I think we have got our routine down pretty solid and I feel confident when it happens if nothing else I will be able to handle it.

We did have our first encounter with a person walking down the road. I slowly reined in Brut who too busy at first taking treats to notice our neighbor.  Then the closer we got to each other, I grabbed a handful of treats, but didn't get enough, and as I chain fed Brut I was trying to make the treats last, but it was beginning to aggravate him.  Thriving on his body language as I grabbed more treats and just as the walker was across from us, Brut took the opportunity to move towards the man.  I felt it before it happened.  I tugged on the leash the second he flinched, then shove more food in his mouth and we passed without incident.

IT. WAS. PHENOMENAL!!  I handle the whole situation with a calm, cool demeanor.  I was prepared and felt very collected.  It was an awesome feeling.  I used to make a big deal when people were around.  Brut would be at the end of the leash and when I saw people coming towards us I would reel him in next to me and hold the leash in a death grip.  One, because I am so nervous and self conscious around people that it would shoot my anxiety through the roof and two, because I was walking this powerful, aggressive dog and I didn't always know what he was going to do.  In fact most of the time I would just turn around in order to avoid the whole thing.  But this was the first time that I watched Brut encounter someone and not escalate with each step.  He actually stayed fairly calm and responded so quickly to my tug it was like a reflex that he took the treats.  It was fascinating to watch and be part of something I never thought would happen. 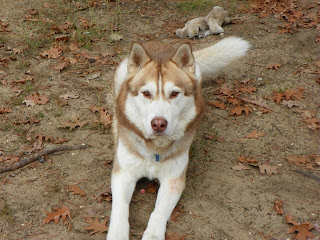 Now I know running into a loose dog would create more fight response in Brut than a human and I know our day is coming, but running into the walker was great practice.  I think Brut is noticing a difference with me too.  Not only are my anxiety levels down and under better control, but we can walk further this way not fighting each other.

I have always been afraid of breaking Brut's spirit by hard discipline, which for a long time seem the only 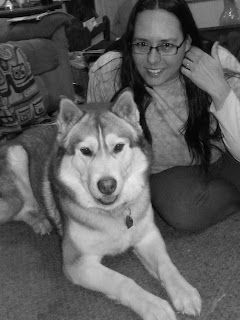 way I could find in research of how to handle an aggressive dog.  And Brut is quite a strong willed dog.  I've been working this "out of love" angle for some time and this is the proof it is coming together.  I have given up with him so many times when it comes to leash training that if it wasn't for my body taking the brunt of his pulling, I may have never changed to this new way with the harness and clicker training.  It's an accomplishment for both of us on so many levels and I am so humbled to be a part of it.  It is truly an honor to work with this magnificent dog and watch him blossom to a higher state of mind than that which he started with 6 years ago.  I am so very, very blessed to have Brut, who has shown me over and over again that all things are possible with a little love and time.
Posted by 24 Paws of Love at June 28, 2013
Email ThisBlogThis!Share to TwitterShare to FacebookShare to Pinterest
Labels: clicker training, dog treats, dog walk problems, dog walk training