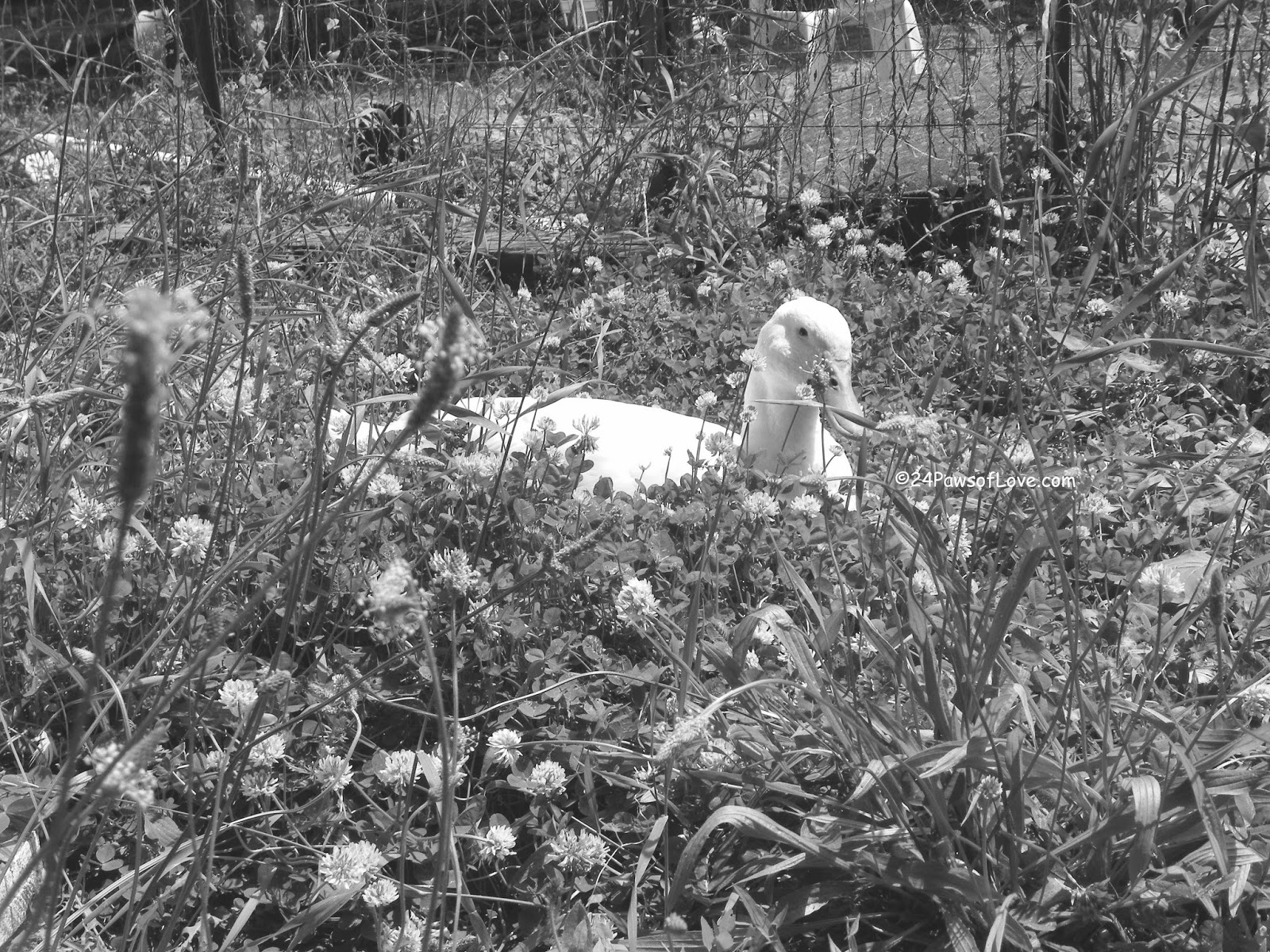 It's been a week ago today since Luigi died and I have tried to write a memorial, but I can't.  I am still grieving over his surprise death.

Sunflower seeds killed him.  Ducks can eat some, but too many makes it hard for them to digest and screws up their system.  Obviously shutting it down and killing them.  I didn't know this until Luigi had already eaten on them for a day and a half.  He's eaten many greens out of the above patch that was his and never had a problem.  And it was odd for him to come out of his pen in December, even with the mild weather to his little fenced splice of heaven.  Very odd.  But he wanted out badly, so I let him, never thinking twice about it.  And what were the chances that he would eat the seeds that I just started putting out for the wild birds for the first time in several years.

It was a coincidence:  An act of God who wishes to remain anonymous.

It is the only reason I know for why he would die from eating sunflower seeds that I never had before out there...God wanted him back and probably his ducky girlfriend Mojo who had preceded him 11 years before.

I had the color version of this picture, one of the last took this past summer of Luigi, on my computer wallpaper and had just changed it before he got sick.  It is one of my favorites of him.  Something must have been telling me even then.

I hope Luigi is having the pool party of his life!  I never loved a duck like him and I don't know if I ever will again.  He taught me ducky language and I engaged his love for water with a pool, a bath, and flooding his pens for the marshy feel.  Having a duck was one of the best experiences of my life and one I wouldn't have had if it weren't for my husband, Mark, having one as a kid and wanting to do it with me.  It was odd at first but soon became natural thing.  Luigi took me for one wild ride after another and I wouldn't trade that for the world.  He was a one of a kind duck.

Farewell Luigi!
Until we meet again!

Posted by 24 Paws of Love at January 04, 2015
Email ThisBlogThis!Share to TwitterShare to FacebookShare to Pinterest

I'm so sorry. It's never easy to lose a friend.

I'm sure Luigi is swimming and paddling and loving life across the bridge. He was a beautiful duck!

I'm so sorry. We can't know why these things happen.

I know you'll miss him.

Oh I'm so sorry. A beautiful tribute to your ducky friend. Ducks are wonderful creatures. I'm glad to have met him and I feel your heartache. Hugs to you!

Soft woos of comfort as you struggle to understand and find peace. May your memories of Luigi provide warm solace as you think about his antics and how much he added to your lives. He was loved and knew it. He will not be forgotten.

Luigi was lucky to have you for his family. :)