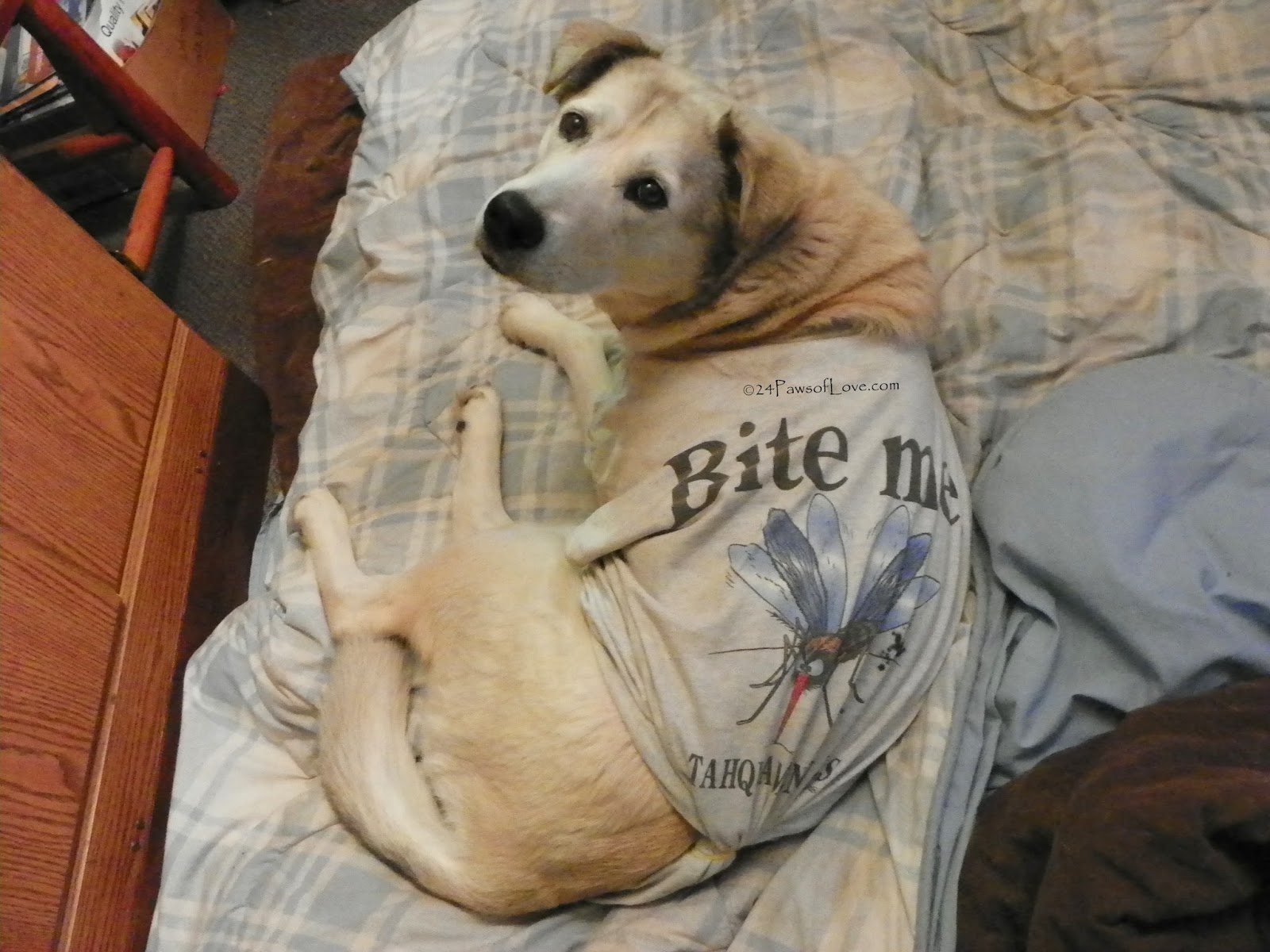 First day back from being spayed
I think the shirt says it all!

We are coming up on a year since Blaze was spayed.  How are things you ask, much, much calmer.  Steady.  Even Steven.  We are not having those jagged up and downs in mood swings and testosterone!  ☺  It is especially easier on Brut, who is still intact, but his day is coming.  His demeanor has leveled out dramatically, as you might imagine and there is a consistency in his mood, for the most part.

Blaze has done well after finally getting healed up, although there are a few negatives that we are found doing this procedure that are a bit of a let down.  Blaze used to get really clingy and cuddle very close at night when sleeping when she was in heat.  I miss that.  Now, at least with me, she barely gets on the bed anymore.  :(   She would cuddle so close and press right up against my body.   And I really, really miss that. 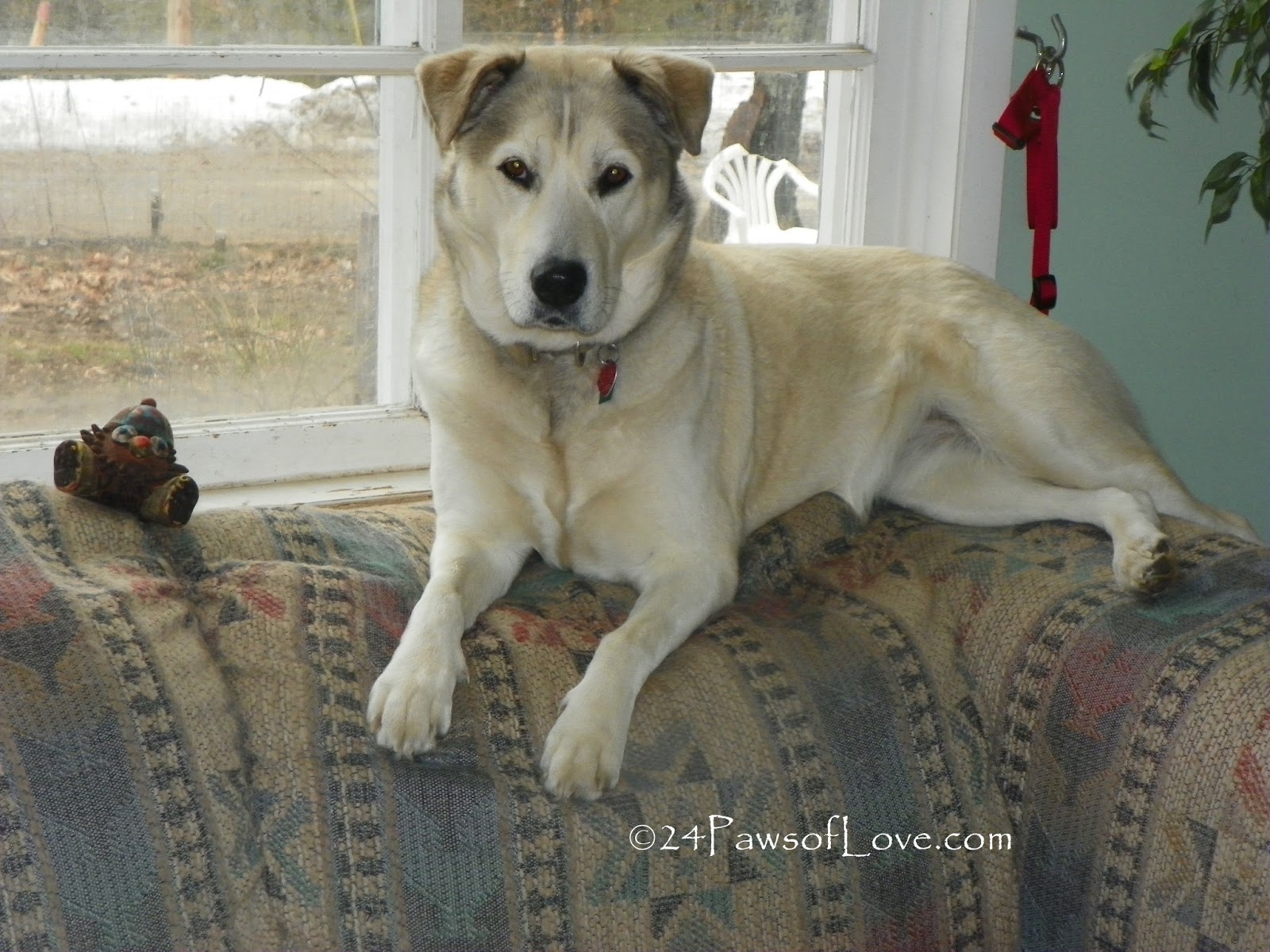 The second is that she has become a horrible foodie!  She gets into everything!  I can not tell you how many times something got left out that she got into it.  We have a lock on the garbage because she figured out how to open the pull out drawer where the garbage is!  She has just been crazy about food and eating as she has also become very grabby, which we are working on.  She used to not care about food one way or the other, but now she can't get enough.  It is one of side effects of spaying later in life.  The dogs are used to a high metabolism rate and may struggle when it suddenly slows down.  She has taught me this past year about putting everything away before I leave the room and how to keep a better kitchen.  lol  She has put on a few pounds as well and we are doing the green bean diet (substitute 1/4 of her food with green beans) with her to help get it off, plus more exercise.  We hope with spring and summer coming we will be able to ramp up those walks to help tone her down.

But the best part is that it didn't change any of her personality, quirkiness, or the little bubble of silly energy that makes Blaze, Blaze and that was my biggest fear after the changes I went through when Silver was spayed.

All in all spaying Blaze was a good decision and it is heaven not having to think about whether or not to breed her.  I'm really happy with our decision and especially how Brut has been handling it as well.  Although if I had to do again and had a puppy, I would do it when they were young at four months old like I did with Zappa and Fiona, who worked out great.  Just some food for thought.  ☺
Posted by 24 Paws of Love at March 12, 2015
Email ThisBlogThis!Share to TwitterShare to FacebookShare to Pinterest

We had Puppy Brown altered a few weeks ago. So far, the humping behavior has toned down a little. He usually does it to dominate Asti. At least I won't have to worry about having to rehome puppies. On the downside, I'm a tad concerned whether this would affect his immune system. Buchi had a skin problem because he was immuno-compromised. It was really awful. I just pray Puppy Brown gets his immunity from his Mom.

P.S. Glad to hear Blaze's spaying was a behavioral success.