Here's Where We Are Now with Chance's Diet

Our dog Chance had a high pH urine reading and has been put on a special dry food, treats and can only have vegetables for anything extra.  We are three months in and it has been a difficult transition for everybody.  Here's where we are at now. 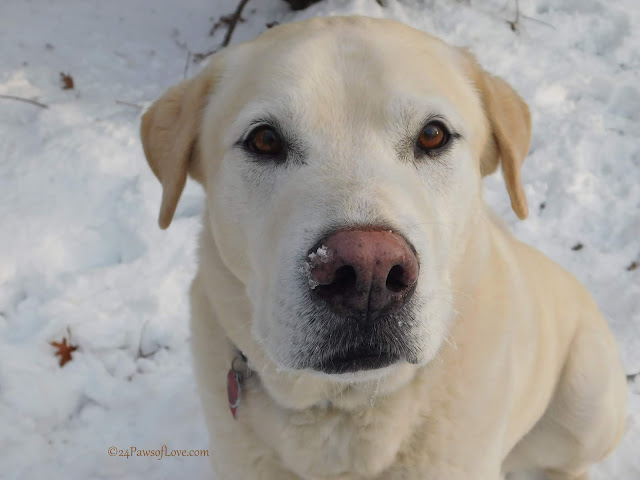 You mean I still can't lick your plate??

It's becoming more routine now dealing with Chance's limited diet.  It is still hard to resist not giving him some goodie I know he loves, but 99% if the time I refrain.

My husband, Mark has been doing much better than me since this diet started 3 months ago.  He has stuck to Chance's diet and given him the approved foods he can have.  It took some time for me to come around and I think it was more of a challenge for me because it was about the sharing and bonding Chance and I were doing when we ate together.

And how has Chance been handling it?

Once Chance learned he wasn't getting any food, he goes to his bed and hangs out there while we eat.  Which is great.  Takes the pressure off of everybody.  He's allowed vegetables for treats and we always share some with him after we are done eating.

Chance is a counter surfer and always has been, but now he is doing it all the time.  He even picks up odd ball stuff off the counters and table that are not edible, just to hoard. It is really starting to bother me because he's never touched any of these things before and is getting a bit obnoxious about it.  We have a camera in the kitchen to keep an eye on him, which has helped out greatly catching him in the act.

Hopefully this phase of his diet will be over soon.  In the meantime we are doing the best we can with Chance and hoping to get some answers with his next urine test, that in itself is a whole different ballgame.  More later!
Posted by 24 Paws of Love at March 14, 2019
Email ThisBlogThis!Share to TwitterShare to FacebookShare to Pinterest
Labels: Chance, dog urine pH levels

I cannot remember if you said you were feeding him a prescription diet like Hills or not. I am assuming you are aware if you are of all the recalls going on with Hills now and other brands. Have you tried doing anything holistically to bring his ph level down?

kruzingwithk9s-We are feeding Chance Royal Canine, so I hadn't heard of the recalls for Hills. Everything I read about bringing his pH levels down holistically, is everything our vet told us to do. (even though she isn't a holistic vet) I really think it was all of the different human food we were feeding him that is the cause of the acidity in his urine.

We do not have any holistic vets in our area or surrounding area. We live up north and there is nothing available up here. We had the same problem finding a good behaviorist around here. There just isn't much to choose from unless we want to drive downstate and that's just not possible. Thanks for the questions and your help.

It has been a long time since we had a counter-surfer extraordinaire! So I know the challenge you are facing with that and diet! We have the same thing with Bailey's diet, and really limit her intake. So high-fives, fist-bumps and kudos to you for staying and keeping focused on the goal! :-)