Where there is life--there is HOPE 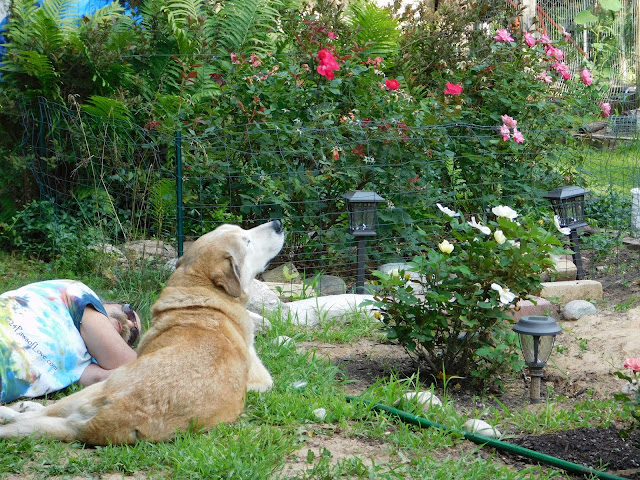 Hanging out with Daddy and Blaze

Zappa's been coming in the Front Dogs yard (Chance and Blaze's territory) as of the last couple of days.  The first few times he was out there were short and sweet.  The last few times have been about a chipmunk that he's hoping to see again, even in the pouring rain.

At first he seemed so alone out there and it made me realize how he was the only dog.  It didn't stand out so much when he was out in the backyard, his domain, as it did out front.

Then yesterday he discovered a chipmunk and he has done nothing but hunt and wait for it.  I don't know how to break it to him that they won't come out in the rain, but he sits and waits for it anyways.

It has given Zappa a purpose, a reason to live doing something he loves.  In the place where Chance and Blaze had the joy of chasing chipmunks, now Zappa is blessed with them.

And seeing how the Front yard is smaller and more compact than the back, Zappa can use less energy since he isn't as swift as he used to be.  Making the chipmunks more viable to chase and maybe catch.

And that creates hope.

Hope I think we all needed at this moment in time.

Hope to carry on with life.

Hope to believe in a tomorrow.

And hope to live on.

Posted by 24 Paws of Love at July 19, 2021
Email ThisBlogThis!Share to TwitterShare to FacebookShare to Pinterest
Labels: dogs chase chipmunk, Zappa

I love this post, it's filled with hope, and hope is what I need right now. It's what we have to hang onto and you are right, it allows there to be a purpose. I smiled at what Zappa's purpose is at the moment. ❤❤