The tears just sprang out of nowhere

It started with Blaze's song and ended with paw prints and two lift harnesses.

I haven't cried over just Blaze in a very long time.  It has taken this long to be able to process her death, without thinking of Chance and Fiona.  I never really got the chance because the focus immediately went on Chance as he struggled through Blaze's death.  And then we put Chance down and buried him and Fiona started her tailspin to her death the next three days.  And it has been an almost constant of Chance and Fiona, Chance and Fiona.  Never getting the chance to grieve my Sweet pea.  This was like a crack in the dam.  To be able to touch it and feel it.

It started when I was trying to figure out what was wrong with me.  What diagnosis did I have for today.  When I remembered what a friend said about going through a traumatic event.  Three deaths so close together.  Of dogs, no less.  And that's when Blaze's song went through my head and I broke down, only thinking of my little Blaze.  I missed her so much.  Not being able to grieve for her, the only thing I can remember about her is her barking at mealtimes.   Like it's the only thing stuck in my mind.  Hope that breaks along with this open healing.  I know there was more, but right now I can't find it.

Fast forward to evening time, I sat in the garage while Mark did odds and ends.  Chance and Blaze's pawprints were on the floor in a box in garage.  Where they had been all summer.  I finally picked them up and put them in the bedroom, in the bookcase with the others.  Their last steps.  I labeled and put them away along with Fiona's and Blaze's collars.

The last thing in the box was the red lift harness.  Still with their fur and smell.  The tears were filling up, I hung them quickly and walked away.  I wasn't ready to go there, yet.

The dam broke later that night as I was flooded with grief and sadness for my little Blaze.  And with it came all the memories of her and our life together.  It hurt but it was a good hurt to remember, feel and be in touch with my one and only Blaze. 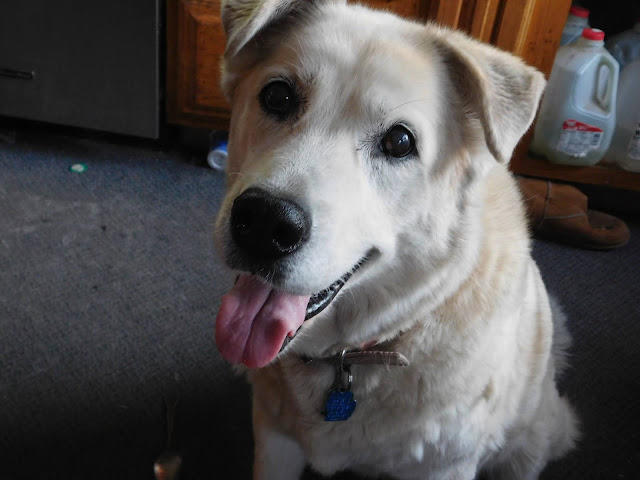 Posted by 24 Paws of Love at September 12, 2021
Email ThisBlogThis!Share to TwitterShare to FacebookShare to Pinterest
Labels: Blaze, death of a dog

Oh, that was so needed. Adjusting our lives from happy, crazy, loving days shared with a full pack, to suddenly losing all but one (and all way too close together) is such a surreal thing. One day a full pack, and next, one dog. Or so it seems. I was reviewing photos and videos to post on my blog and when I came across the ones of them all together snuggling and howling, at first I laughed because they always made me smile when they howled (and so out of tune! LOL) and then...I cried. I miss them. I miss me with them. And at the same time, so thankful to have Wolfie with me. Only the ticking clock is now always in the background...and I hate that. So I try to embrace each day, each moment... before those tears one day (far from now I hope) comes again. Me and Wolf. You and Zappa. May we have love and joy for more years. <3 Hugs to you and Zappa!