And now for some good news!

Zappa is experiencing a whole new adventure these past couple of months, he is getting cold laser therapy treatments for pain in his hips, lower and upper back and his knees.  And so far it is working!

Let me back up for a minute...

His pain.  He was having a hard time standing, sitting and lying down.  It was slow and painful.  Right now over the last 8 courses, he can stand up relatively steady and quicker than before.  There were leaps and bounds of progress to reach this point.

He started sitting in the last couple of weeks, which was HUGE progress.  Zappa hasn't been able to sit at all for the last couple of years.  So this was phenomenal!  And if that weren't enough he started sitting in the van on the rides to the appointment.  He had been standing for the entire hour and a half ride, there and back.  Causing more strain and tension going to the appointment and after treatment that we didn't know if there was any point to continuing therapy.  It seemed it was all going to be counterproductive if we couldn't get his anxiety under control during these car rides.  I mean, he was just shaking like crazy, a total bundle of nerves, all through the visit and all the way back home.  We needed help!

Thank God for anti-anxiety medicine!  We finally got Zappa some by the third visit and it was the only thing that worked.

So now we're about half way in to the treatments from where we are now and Zappa is standing through the car rides, but isn't shaking and is more relaxed.  He is starting to calm during the laser therapy.  Each time we go he is staying still longer and longer.  Then it doesn't take long and he finally lays down in the car on the way home one day.  Then he does it on another ride for a longer period of time.  Then he lays down on the way there and we are unwinding with him at each move.  The three of us have become one big knot that finally started to unravel.  I didn't think we would ever get to this point.

Right now we are going twice a week, same days and time, making a steady routine for Zappa and us.  We are continuing this schedule until the end of the year.  If all goes well, we will only have to go once a week to manage Zappa's pain.

And all of this is happening because of my husband's determination and perseverance and of course love, because he didn't want Zappa to have to live on pain medicine for the rest of his life.  The best part is that it is paying off and if working.  This whole experience has been worth seeing Zappa move easier and with less pain, without the side effects of medicines. 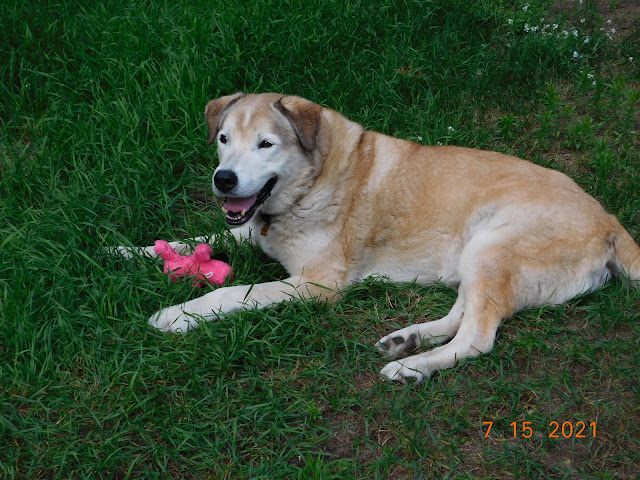 Posted by 24 Paws of Love at December 17, 2021
Email ThisBlogThis!Share to TwitterShare to FacebookShare to Pinterest
Labels: cold laser therapy, Zappa

Excellent news. Here's to a very Happy New Year for everyone.

Love the ggod news! And he looks so happy there, too! I know laser therapy really helped my Gibson so much. So happy for Zappa and you and Mark! Wooo!