"Four on the Floor" by Daddy 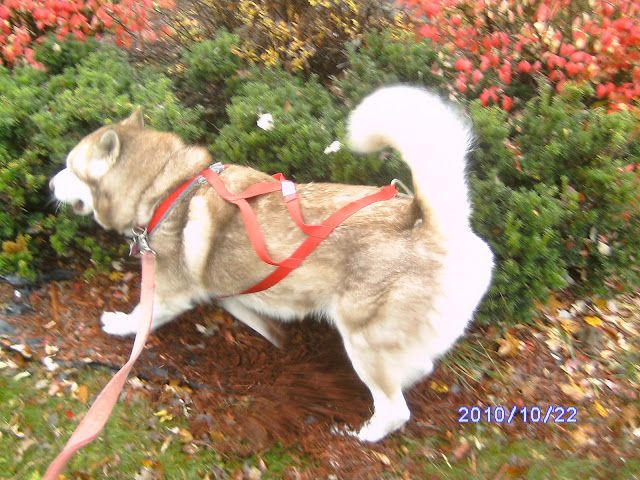 Brut's "Four on the Floor"
Just a little more to the left, then I think I've got it!

I was accompanied by Brut today for my ride to work.  When he comes with me in the car, he always trying to tell me what to do for the first ten or fifteen miles.  Then he finally realizes that it doesn't matter what he says, I'm the one who's driving.

When we stopped at the gas station, Brut did what we call his "Four on the Floor," (leaving his scent mark by scraping the ground with his paws)  and they were pretty forceful.  Each time we stop at this particular gas station he really puts his heart into changing the landscaping, kicking the mulch all over the place.

Maybe he is hoping to get a job doing the mulch work at the gas station.  So far the owner hasn't seen his fancy foot work but then that's probably a good thing. :)
Posted by 24 Paws of Love at October 28, 2010
Email ThisBlogThis!Share to TwitterShare to FacebookShare to Pinterest
Labels: Brut

I love the name for that - four on the floor! Fred does it every once in awhile and it makes me laugh.

Great phrase! My dog has a cast on one of her front legs. I've kept her quiet like I'm supposed to. But, the one thing that I CANNOT stop her from doing is the "four on the floor", and it gets more forceful by the day. It cannot be good for her bad paw! But, I love the phrase!

That's too funny!! Maybe he's leaving a message for his lady, dog furiend there!

That's a funny phrase! I do the same thing sometimes!

We see that same four on the floor move here with Phantom. Ciara prefers to just make those two front ones work as she digs and digs and digs. Brut and Ciara would make a great landscape team.

I love that phrase too! Very creative.

Blackie, our visitor loves this activity too!

I do that too sometimes! Mom always yells at me for "marking"... whatever, mom.
-Corbin

I don't do that but it's a perfect name for it! I have seen Corbin do it though :)

The picture is marvelous!! Nice sitting and Halloween is this weekend!

Grover loves leaving his mark in the mulch. Way to go Brut, you are on your way to being a mulch designer.

He's just letting the other pups know that gas station is for his car.