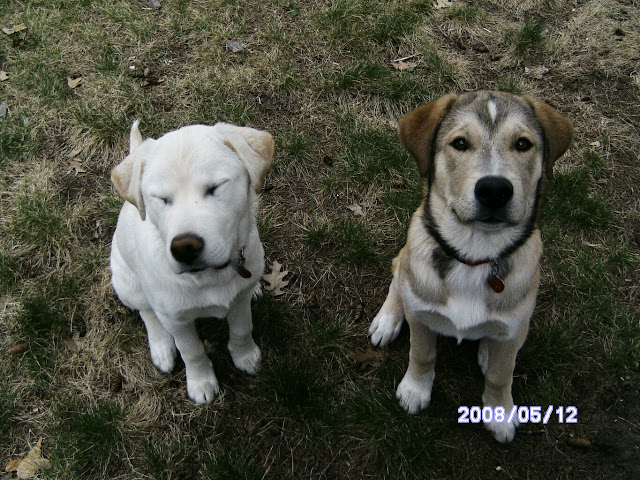 Fiona and Zappa at 4 months old

So sweet and precious my two little ones.  All of the puppies had found homes and now it was their turn.  The instant Zappa was born, we knew we were keeping him.  I knew the first one born would be "my" Alex.  Zappa has his eyes, even though Zappa was only related to Alex by spirit.

Fiona was the last born and the runt of the litter.  After the first three days of watching her give everything she had to keep up with her siblings, I found myself drawn to her and there was no giving her up after that.

What a wonderful time that was.  It was our first time having two puppies at the same time.  For some reason it seemed so easy compared to having the litter.  BOL
I wouldn't trade that time for anything in the world.  It was just as sweet and precious as this picture.

Posted by 24 Paws of Love at October 18, 2010
Email ThisBlogThis!Share to TwitterShare to FacebookShare to Pinterest
Labels: Fiona, puppies, Zappa

I just love reading happy stories! Everynow andthen I re-read each of their stories. Wow! This is pawsome. Thank heaven for great hooman's and we wish to the star's above to make the not nice hooman's a whole lot better.

Thanks for sharing the story of Zappa and Fiona! Please tell us more about them!

I love the picture of them, Fiona looks like she is smirking , ahhh two puppies at the same time - Fred and Hay were 3 months apart and I tell you what it was a blast having two puppies around :)

They sure were little cuties that grew into sweetie pies!

So sweet! Loved reading the Monday Memory this week. :)

I loved hearing the stories about these 2 pups. My mom person hopes to someday have some litters of puppies.

Not with me though, they had my Oskar-berries removed when I was little, BOL!

I love that photo and the story behind it. They're both beautiful. I see that something special in Fiona, that determination, that you saw.

I once had two puppies at the same time. Oh my - what craziness! I've never had a whole litter in my house. I can only imagine :)

What a nice story about Zappa and Fiona. They look very happy and glad they are in your family!!