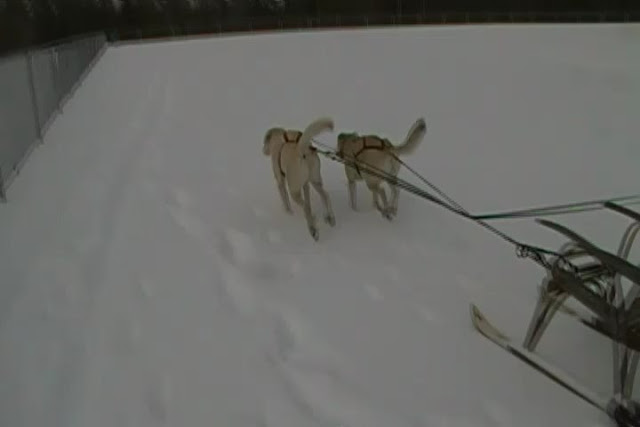 I thought I had it all planned.  We were going to take Chance and Blaze to the local football field to practice dog sledding.  I had thought everything out except for a few minor details...

1.  We were taking the dogs to a place they had never been before heavily populated by deer and rabbit and except for the fence around the actual football field was a wide open space.  Which meant there were no trails or paths to follow and they were used to running down the road.

2.  Two inexperienced mushers.  One that had to act as the brakes by body slamming on to snow in order to stop the duo from taking off into the surrounding woods.  All the while thinking for some reason they would just know to go around the field with no problem.  While the other took video and thought it would be better to have them inside the fenced area.  Did I mention the dogs haven't been here before?

3.  Two untrained hyper sled dogs who have been cooped up due to a small injury.  Who also prefer to think for themselves and when put together do their best to outwit me while using their combined strength in order to achieve their own personal goals.  Have I mentioned the dogs haven't been here before?

So we take off along the back stretch along side the woods, things are going good.  Until I realize they are looking for a way into the wooded area.  Having a homemade sled with no brakes means using all my body strength or taking to the ground to stop them, my commands mean nothing to them.  Sly grins pass between them as they are enjoy running the show.   I turn them, run with them to get going, hop on the sled and in seconds we are in the woods again.  I had a thousand butterflies in my stomach before we even left the house, and this first "correction" knocked the wind out of me and we were just getting started.  Repeat this cycle 5 times.

I finally guide them inside the football field.  I am so exhausted I lay over the sled while they pull me.  I'm not thinking about much but trying to catch my breath.  At least at this point they are contained, though they try to run to each side trying to get out of the few open gates.  Thank goodness they were starting to slow down a bit.  :)

A few times around and Daddy takes a ride.  I am in desperate need to a break.  My body is shaking in pure exhaustion, but I try to keep them running for Daddy.  When we finally figure we've had enough, we take the short walk home.  Blaze is still raring to go, Chance has calmed slightly.

It was an experience I won't forgot and an easy way to learn what NOT to do when taking your dogs sledding.  lol After those first couple of times of pulling them out of the woods, I started thinking, I'm not going to make it through this.  I was nervous before we started but once the wind got knocked out of me and everything was so unpredictable, unlike sledding down the road, it was a bit scary to say the least.  We decided that next time we will take them straight into the fenced area and worked with them there.
We both agreed, Daddy was right to begin with.  :)


Here's me taking a ride on the inside of the fence.  Daddy missed all the funny shots with me holding back the dogs in the snow.

And here's Daddy on his sleigh ride.

Now after all this excitement and an achy body, I'm curling up on the couch and not moving for the rest of the night!!

What a great idea, fun and workout for the whole family!

Sure looks like a lot of fun for all of you. NOW if only we had some snow:(

Inexperienced, but loving it!

I think you did wonderful! I'm living vicariously through you! I've been thinking about getting a kicksled...I'm learning a lot from you! Our Bandit is my main concern - she's very high energy, and likes to fly instead of run...and I think she may have ADD, so I'm a little worried about what might catch her attention while out! I know they would have a blast, but me, I better get in better shape! LOL! So much work - so much fun! Glad you're OK - rest up! The sled dogs are waiting for you!

That looks like a lot of fun! You had more fortitude with it than I would have! lol At least you learned some things from it! :D

Oh wow! This looks like such a blast. And entirely exhausting at the same time. Does it at least tire out the dogs as well? The smiles on their faces were unmistakeable, though.

Practicing inside a fenced area at first is probably smart. But I understand the draw of the open road. The whole thing looks so exciting. :-)

Wow, what a great adventure!

Hee Hee Hee Mom would have luved to have been there :D Two body breaks are better than one? BOL! And the homemade sled? :D :D :D luvin it! A chair with skis? You're too good!

Waggin my tail off at ya,
Roo

Way to sacrifice your body for your dogs!

I love that you shared this. I'm sure other mushers out there (including some who are world champions) have similar stories.

But it looks like a great time! I hope you're not too sore the next day.