Monday Memories-Would you do it? 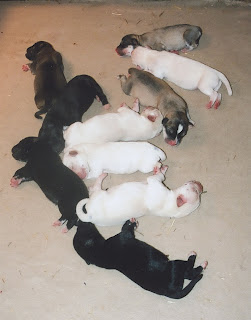 Perfect.
Just the way they were on their first day in this world.
About 24 hours after Silver gave birth, I ran her to the vet to make sure she had given birth to all her puppies, par the vet's instructions.  Being a new “Grandma” I had some uncertainties if there were any more pups to be born.  After Silver had her x-ray and all was clear, the receptionist, out of the blue made mention that to in order to have dew claws removed and tails docked, I had a three day window to get it done.  I was shocked by the very thought.  I had never heard of removing the dew claws.  I had ten freshly born, healthy pups and I couldn’t imagine chopping off any parts of them.  The thought was a bit disturbing, to say the least.

Both Brut (father) and Fiona (daughter) have a third dew claw on their back right leg, an inherited trait, that Brut must have picked up in the genetic line.  As you can see it hangs looser than a front dew claw and is more susceptible to getting caught on things, though I have never run into that problem.  Our vet mentioned when Brut was young if we wanted to have it removed we could.  It has never crossed my mind. I have always loved the uniqueness.

From my understanding the removal of all dew claws is a preventive measure, because they can snag and tear off.  It is can also be a selling point if the dew claws on puppies are already removed.  Tail docking is considered show standard for particular breeds.

Though I am aware of that these procedures exist and understand the theory, but I personally could not begin to fathom the idea of actually doing them to our little newborns.  Even now as I look back at that precious little bundle, so perfect just the way they were, the thought gives me chills.  I am just not to type that could do that for any reason. 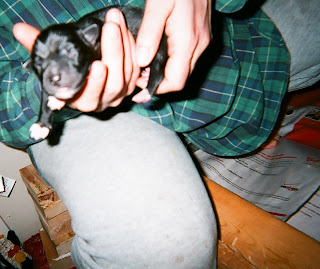 How do you feel about it?  Could you do it?
Posted by 24 Paws of Love at February 06, 2012
Email ThisBlogThis!Share to TwitterShare to FacebookShare to Pinterest
Labels: dew claws, monday memories, puppies, vet

Dewclaws, yes. I've seen a lot of dog bloggers talking about dewclaw injuries. Elka doesn't have hers; they were removed at 3 days, more or less, along with her tail.

Those puppies? I have no idea why you'd dock. According to the pack member "dossiers", Silver is a lab/husky, and Brut is a husky/chow? None of those are docked breeds, so even if they were purbred it makes no sense.

We've seen a few injuries, but that happens to dogs and we wouldn't have them removed unless there was a real health issue. Tail docking was banned in the UK in 2007 except for certain working breeds and medical reasons. Deccy x

I think tail docking and ear cropping are barbaric practices. I see no reason for doing them if they are not medically indicated. Same with removing the dewclaws.

Dew claws and tail docking, maybe... if I was intent on showing. I have seen messy dew claw injuries but have also had many dogs with dew claws and never an injury. The procedures are done early enough and studies show pain recovery is quick. Ears? I LOVE the cropped look, but NO.

I am really baffled and shocked by the vet staff even mentioning tail docking for your puppies. Sounds like an up-sell to make extra $$$.

You made the right decision to let the pups keep all their parts!

I'm with you! I couldn't do it unless there was a health issue!

Absolutely not for tail docking or ear cropping...that IS barbaric! The Rescue vet offered to "shape" Puff's ears which are severely scarred along the tips from fly bites so there "would look better"; we never even considered it.

Dew claws only if there is a history of problems or a medical reason. You made the right choice in my book!

Shiva came to us via the shelter with both rear dew claws removed. I don't know who owned her previously but there are definitely visible marks where the claws used to be. She still has both front ones. Personally, I don't see the point of removing them unless she is one day injured.

Fortunately, both tail docking and ear cropping are illegal in Nova Scotia. People still do it themselves of course, but no licensed vet will perform the surgery and those who do can be charged. There has been some complaints about this from the purebred dog community but I am in total support of this legislation.

I agree with you, but I also have seen the bloody aftermath of ripped dew claws. Even more stressful and not pretty. When they are pups and they are removed, the bones aren't fully formed and there is very little bleeding (it varies). Older removal is more of a major surgery and you have the risk of anesthetic issues. I think I would opt to have it done as pups.

BUT NO TAIL DOCKING (OR EAR TRIMMING) EVER!!!!

Definite No No for mommy!

Hmmm, it's tricky. I don't agree with voluntary mutilation of a dog- thankfully here in the UK ear cropping is banned outright and tail docing is ONLY for use on working dogs, and these dogs must have a certificate to show that they are working dogs. Dew claws... we have had some issues with Ambams dew claws, and now she is an adult it would be a bigger, more painful operation to remove them, so unless we HAD to, we wouldn't... but if we had her as a pup and we were offered to have them removed... I don't know, it's a less major op when they are pups but is it really necessary? I suppose I would agree to it if the pup most clearly had abnormal, very-low-lying dews which would almost certainly catch, but I never would for perfectly normal ones, or any extra dewclaws like Brut and Fiona, which would NOT cause a problem, I would certainly leave them alone.

I am a mini schnauzer who had her tail docked just a few days after birth, and I am here to tell you it is NOT right. I know they say that supposedly the pain goes away for the puppies, but I have had lifelong trouble with my docked tail. My Mommy rescued me at 9 weeks of age and spent years helping me deal with the pain and infections of a docked tail. I have a raw nerve bundle that used to make me run from my tail a lot. Mommy & the vet finally found a nerve medicine called Neurontin that has made me 95% nerve pain free, but I sure suffered before that.
My Mommy and I are totally with you, Just Say NO to tail and ear docking. I did also have my dew claws removed, but I have had no troubles with that. Still, keep us puppies natural, unless our lives are at stake. Sorry for the puppy epic, but I am one pup who feels strongly about the subject. :)
Love Pixel

Dew claws yes, only cause my Dobi got her caught one day, blood everywhere and she was scared to death. Vet had to take it off, some of it has grown back but only a little thank goodness.