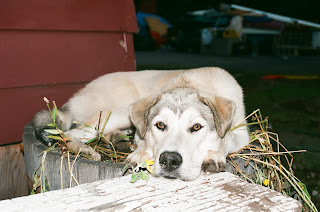 Blaze's favorite spot when she first returned.
My flower barrel

For those of you who are new to us and may not know, Blaze is a dog from our own litter of 10 puppies.  She is Zappa and Fiona's sister who was returned to us at seven months old severely abuse from her previous owners.  Neither my husband or I knew how to introduce her to our own pack, so I began reading any info I could find how to blend her into our four original dogs we call the Back Dogs which consisted of her parents, Brut and Silver and her siblings, Zappa and Fiona.

Here are some of the things we tried:

Meeting in a neutral place with lowest dog in the pack:  Sounded easy enough.  At the time we thought Fiona was the lowest ranking dog, so we took her and Blaze to the park, where Fiona continually snarled and lunge at Blaze who responded the same way.  This didn't go well at all and we were at a loss again.

Rubbing Back dogs scents on Blaze:  This was suppose to help the Back Dogs accept Blaze by rubbing their scent (from their bedding) so she would smell like them when they met again.  This showed no promise either.

Called a trainer:  This is what people do, so I decided to try.  This is the trainer who after giving the whole run down saw absolutely no hope, gave up immediately when I explain the circumstances with his only answer being to get rid of a dog or two.  Dead end.

A little hope comes along:  Somehow we made headway with Zappa.  He liked taking the alpha role with her and after several short times together, they were able to be trusted with each other.  So much so I was able to let Zappa come and 'visit' Blaze on her side of the house before Chance came back and a few more times after his return.

I was also able to pair Zappa and Blaze a few times to dog sled.  They made a great team together between Zappa's muscle and Blaze's speed they ran like champs.

Once we got the call that owners wanted to return Chance, Blaze's long lost friend everything clicked.  Finally Blaze had a someone she knew, (their previous owner's were related) which took off all of the pressure of meshing the two packs.  Both Chance and Blaze had been through too much as it was and now that they had each other again it didn't matter to blend the two packs right at that time.  There was still much healing to do with just them alone that having them separated from the other dogs was a blessing in disguise.  This way I wasn't adding more problems of having to deal with Brut and his dog aggressive behavior as we still had a long way to go at that time with him and the rest of the Back Dogs.  Major issues that would have been counter productive for everyone involved if I tried to introduce the Front and Back Dogs that I wouldn't have been able to handle. 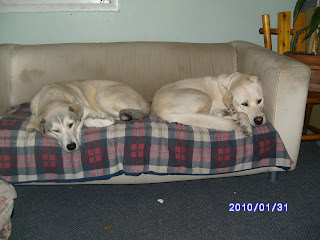 So we have had this separation for the last three years and we are witnessing all of the dog's anxiety levels come to a place of peace, comfort and stability.  The air around here is much more relaxed like reaching a plateau of rest.  While we've started pairing up one Front Dog and one Back Dog for walks, we are taking it slow and easy.  Letting them ease into being together and let things happen as naturally as possible.  Not to mention the comfort level of my husband and I so that we don't find ourselves in a place that makes it worse for everyone.  It has been a slow process, but with so many rewards and surprises along the way.  I know not many would think of running their home in this manner with two packs of dogs, but I keep finding more and more reason why it works for us and our lifestyle.   Pressing upon us that we are doing the right thing for ourselves and our dogs and in the end, isn't that all that really matters?
Posted by 24 Paws of Love at July 09, 2012
Email ThisBlogThis!Share to TwitterShare to FacebookShare to Pinterest
Labels: behavior, dogs

I would really like to see some photos of Zappa and Blaze pulling the sled together :)

Everybody does what works for them. That's what makes us all unique. I love that picture of Blaze in the flower barrel! :)

I'm glad you found something that works for you! :)

When I first started reading 24 Paws, it sounded like you'd never see progress. But you've taken things slowly and listened to the dogs and look where you are now. Did you ever think you'd see the dogs come so far?

I think the proof in how well your instincts have worked is obvious when you step away and take a backward view...then you can truly see how far you have come. Everything has been done with love and gentleness and it shows in the receptive responses to bond.

Your knowledge of your dogs and what works best for all of you is a testimony of your love for them.