Monday Memories-Do you have a memorial garden or grave site for your pets? 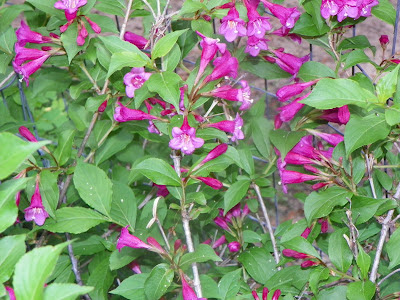 Sparky's Weigela
We have a small grave site for our past on pets.  It is on the side of the house.  There are five sites and each one is lined with large rocks and has a small fence around it because of dogs.  I picked out plants that flower according to the time of their death.  My cat Sparky and our dog Alex died in June and I bought them both Weigela bushes.  I've actually seen the flowers open on June 4, which is when Alex died and stay open just past June 22, when Sparky died. 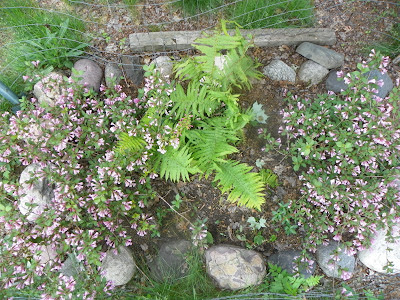 Top view of Alex's site
For Alex I also have ferns from his favorite stomping grounds.  A swampy forest on the lake where he was able to run free and do as he pleased.  I also planted myrtle from another one of his favorite spots where he love to hang out with us. 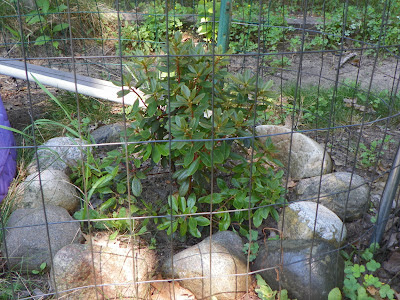 Mojo's Rhododendron
When our first duck Mojo died in the early spring, I have a Rhododendron that blooms as early as spring can start up here.

I'm still looking for just the right plant for our other duck and my duck egg, both whom died in the spring as well.  I'm thinking of an Orange Quintz, a small bush that has orange flowers (to also match their bills) and even though my neighbor has one, they tend not to grow well this far north.  But I would like to try. 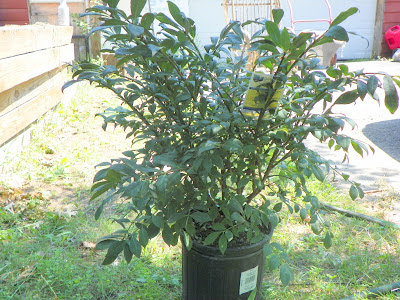 Claw's Burning Bush, ready to be planted.
Then for Claw, my heart cat twin, who died in October, I did have a Hibiscus for her that bloomed in late summer.  It died a couple of years ago.  But as I rethought my idea for having the the plants flower during closest to their anniversaries, I decided to go with a Burning Bush.  And while it doesn't flower, the leaves will turn a bright red in the fall in October, the same month Claw died.

So that's how we memorialize our pets.  What do you do?
Posted by 24 Paws of Love at July 23, 2012
Email ThisBlogThis!Share to TwitterShare to FacebookShare to Pinterest
Labels: death, monday memories, pets

What a beautiful way to memorialize your pets! Wonderful idea!
xoxo Chloe and LadyBug

That's a lovely idea. Wish we had the space! Deccy x

Lovely idea. Happy Monday to you all.
Best wishes Molly

.,oh what a great idea., gotta do this also..lol

I think it's wonderful that you've combined your love of plants with your love of animals. I couldn't do this because I'd just feel bad if I let the plant die (which is more likely than not given my black thumb of plant death).

I have a framed picture of each of my dogs. I like to look at the picture and remember our time together.

Our mom and dad have our sissy Samantha's ashes in dere room next to her foto. Dis is what dey will do fur us too.

My grandmother had the most beautiful burning bush by her house. I always loved it, and they are gorgeous in the fall!

I got a really neat kit from a company that lets you mix in a little of your pet's ashes with the fertilizing compound when you plant memorial plants. I wanted to plant a new lilac bush for Lilac this year, but the weather has been so bad, we'll probably hold off until next year. I'm having a hard enough time keeping the plants I've got alive!

This is such a special way to remember the pets you loved and keep them close by. I am not a gardener by any means but I love this idea.

That's a beautiful idea. I planted a peach tree where I buried my Tashi, because she was little and red and delicious. I am looking forward to eating those peaches and connecting with her--maybe that's macabre :)

Not sure what I'll do the next time one of my fur-ends passes...but I really like your idea.

What a lovely tradition you have! Such a peaceful and natural environment to house gentle memories and love. Our ritual is to scatter the cremated remains at a spot of significance, a favorite romping place, the site of a particularly memorable part of our lives together. And then we plant a bamboo plant in our grove in memorial. Momma loves the sound of wind making the tall stalks dance and Asian tradition is that the noise when swaying is the prayers of friendly spirits protecting.

A foxtail is a weed here in the SW, which produces seeds that look like chaffs of wheat about 1/2" long and spikey/bristley, and it looks like a fox's tail. The bristles cling like crazt and for double-coated dogs quickly work their way down under the undercoat so you do not even know they are there but they drive the dogs nuts. Here is a particularly good photo and article about them: http://venice311.org/2011/07/08/foxtails-and-fleas-protect-your-pet-this-summer/