Collie222 and savannahspawtracks asked a couple of questions from Monday's post and since the answers make a good post I thought we share with everyone some of the progress between the Front Dogs and the Back Dogs.

savannahspawtracks asked, "So, where are the other two guys?" 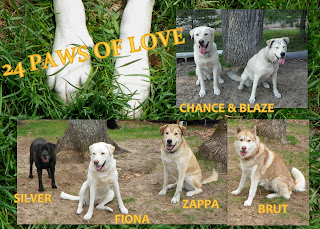 The two packs.  Front dogs on top.  Back dogs on bottom.
For those of you who don't know, our dogs are divided into two packs.  Long story short, they didn't get along and we keep them separated in the house and yard.  They each have their own sides, the front and the back, which is we call them the Front Dogs (Chance and Blaze) and the Back Dogs (Brut, Silver, Zappa and Fiona).  And because Brut is aggressive with other dogs and has issues was having major issues with the other three of the Back  Dogs our progress has been extremely slow.  We struck out with trainers and behaviorist and ended up doing it on our own as the dogs guide us at their pace.  I know most people wouldn't do it this way, but it is working for us.  Since both Front Dogs are part of the litter we had and were  returned to us abused and neglected we've some cautionary road blocks in their healing as well. It took a while for the ruckus to settle down and for everyone to feel comfortable with all the new living arrangements, but I'd say for the last year that what started out as a roar has turned into a purring machine.

So, on the Collie222 question, who asked, "How are you doing with getting the front dogs and back dogs together?"

There are two major changes that have occurred in the last couple of months.  One was a decision by Mother Nature and has been open dialogue between a Front and Back dog. 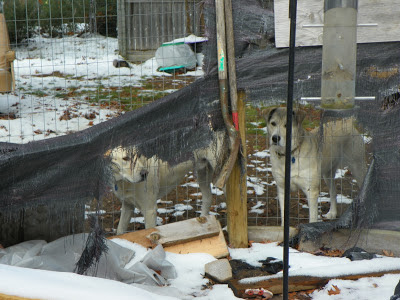 What is SHE doing over there with THEM??
During a couple of strong wind storms in early fall, Mother Nature started tearing down the tarp that was the privacy fence between the two dogs.  There are two fences between where the Back Dogs and Front Dogs yards come together and before they couldn't see each other.  Now they can in one section.  This happened once before a couple of years ago, but there was too much aggression between the dogs and we had to board it back up.  But this time, the dogs are very calm and I think a little curious, they aren't as hateful with each other as they were before.  So this has been a very cool and quite comfortable.  They are all so relaxed, just watching each other, talking a bit, or ignoring each other.  And we didn't have a thing to do with the decision.  It just came at the right time.  We'll see how long it goes and if it keeps going well.  If not, then we'll board it back up and let Mother Nature try again. 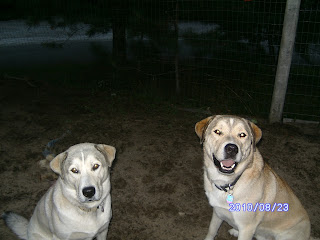 Look at that smile...Zappa knows!
The other exciting news is Zappa (Back dog) and Blaze (Front dog) are talking, I mean really talking when they are trying to get everyone riled up about something.  It used to be that it was Zappa that would get all the dogs going which usually leads to a howling session, but now it is Blaze and him together that really gets things going.  Since they are the biggest talkers of the group, this shouldn't be a surprise, but it is so cool that they are talking and getting everyone involved.

( Zappa and Blaze became close friends before Chance came back and was the only dog we could introduce to Blaze at that time, so wouldn't it be natural that they are finally coming back "together" in a sense?)

These all may sound like very minor things but to watch it happen in action has been such a huge thrill.  Not to mention the journey we have taken so far and keep plowing through. 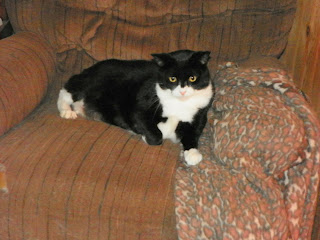 For something different check out 36 Claws of Attitude new post!
Posted by 24 Paws of Love at November 14, 2012
Email ThisBlogThis!Share to TwitterShare to FacebookShare to Pinterest

How cool mother nature gave you a helping hand. We wish you continuing success with your amazing packs. Have a wonderful Wednesday.
Best wishes Molly

This seems like HUGE progress to me and I hope it (peacefully) continues!

Yay! Progress is good! :) I hope to one day read that they are all getting along, and have formed one big pack! It looks like you may have that one day! :)

That is exciting progress!

Doing things at the pace your dogs set for you is important, I think.

Just read Monday's post...wow, you have made progress!! Awesome.

Right on. Nothing stays the same and it's been great reading along on your journey with your dogs. Did you ever think they would be able to come so far a few years ago? I look forward to hearing how this new fence situation pans out.

So glad to get the update. And yes, timing is everything.

Hi - just stopping by to say hello! Glad you are making progress with the packs!

Progress is progress!
We have a friend who had 8 dogs (6 now due to recent passings,) and she has one pack of two and the other together due to some conflicts. It's not an easy rotation but she manages and I admire that!