They need to be taken care of 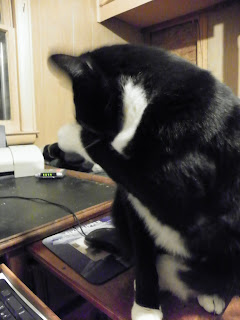 Oh, I can never get this just right!

I was brushing my cat Boxer, which I don't enough because he gets too excited and claws my lap, but I needed a distraction from the leg pain I was having.  Later putting everyone to bed that night the thought struck me:  Pets are designed to be taken care of.  Boxer can surely take care of his grooming necessities, but that extra care of me brushing him helps take care of himself even better.  Since he has a nervous habit of excess licking sometimes, when I give him some TLC it helps in ridding of excess hair, stimulates his oil glands and slows the excessive licking.  The comfort of the brushing massage helped calm Boxer down and the purrs of heat he generated calmed me as well and helped with my leg pain.

And this is just one example.

Domesticated animals are created with a need for humans, but that is not always the other way around.  If thrown in the wild to care for themselves, how many of them would make it?  More times than not they are hard wired to be with humans.  And this is the thought that struck me:  Pets don't grow up and become more and more independent.  They don't eventually learn how to do things for themselves and leave home to start their own lives.  Pets are dependent on us humans to help them with their needs.  I believe it is in their genetic makeup to be drawn to humans for the care they need.

I'm sure there are exceptions, but I believe that would be at the hands of hurtful humans where their spirits have been broken and may never return.  I once had a discussion with someone who thought if she let her dogs loose, they would gladly return to the wild without a look back.  And I disagree with that.  I argued that even if they didn't come back to her, they would still seek out humans for help.

What do you think?  Would your dog gladly leave to return to their roots or would they find someone to help them get home?  Do you think that pets have the genetic makeup to be cared for and seek us out or not? 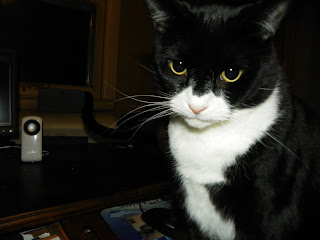 Send them all loose!  Let's see how long they last!!
Posted by 24 Paws of Love at March 12, 2013
Email ThisBlogThis!Share to TwitterShare to FacebookShare to Pinterest

Ha ha that is a great question and when everything is done for you and it is comfy and warm would you want to go back to the wild? No way we say. Have a terrific Tuesday.
Best wishes Molly

There's a reason why it's called domesticated. I think the word itself defines our pets primary instinct.

I have no doubt Honey would find someone new to go home with. But while it's true we've domesticated dogs, in particular, so they need us, they would probably survive better in the wild than most humans.

Cute kitty. Is he up yo no good. We have a cat that adopted us, however he feeds on his own, I suppose whatever he catches that moves lol. That sounds about right, some can fend for themselves while others have to depend on us.