Nature vs. Nurture: Chance and Fiona 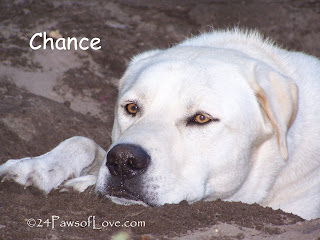 Chance and Fiona two of the white dogs from our litter.  Fiona was kept from birth, steady love, attention, and care.  Chance on the other hand went to a new home at 9 weeks old and was returned to us at almost a year old.  His ribs were showing, he was scared and kept looking for the boy that had abandoned him.   Two completely different backgrounds, yet both Chance and Fiona have similar personalities and traits that make you wonder about nature vs. nurture.

They both pull their partners tail during play.

They were both scared of being brushed.

Both are quiet dogs by nature and it has taken a long time to teach them how to "speak" on command.

They are both love to steal food.

Both are always trying to get their partners to play with them.

And they are both afraid of the vacuum.

Considering that Chance was gone for almost a year except those first nine weeks from birth, you'd think they would be much more opposites, or at least that's what I would think.  I think it's the tail pulling and not liking to be brushed are the ones that stand out the most for me.  Interesting isn't it? 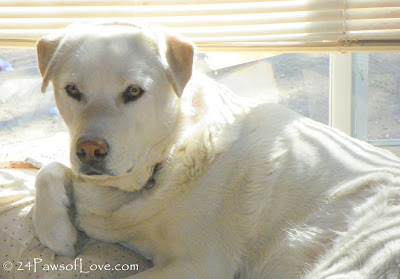 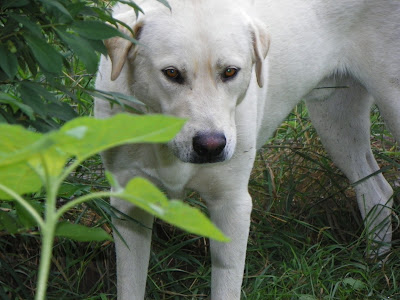 A year is not that long, how old are they now? Does Chance have any additional fears or has he totally recovered from his bad experience?

We too don't like being brushed and we don't like the vacuum cleaner either. Such cute pix. Sad it didn't work out first time for Chance. Better returned though than dumped. Have a wonderful Wednesday.
Best wishes Molly

Don't they say the same thing about twins that are separated? They will still have a lot of the same traits? I know Sam does one thing I saw his Mom do when we went to get him. She stole a plate off the table and carefully carried it (with all the food) back to the barn. Sam does that too.

Kori hates to have her nails trimmed. And I mean it's a wrestling match! Her littermate, Ryder, doesn't mind it at all. Little sister Scarlett doesn't mind it either. But mama Abby hates it, and so did her mother Angel...

So there is definitely something to the "nature" side of the debate.

I love that dogs (and people) are so complex that it's hard to tell why we are the way we are. Wouldn't life be more dull if you knew exactly what to expect based on a dog's experiences? Or his genetics?

Re: Jet, Chance is 5 years old and no he still has some fears and phobias but they aren't as severe as they once were.

Interesting! Are they look like twins and are separated somewhere?

Also interesting how cute they are! :)
Nature vs. nurture is a captivating concept!
I always think of this with Braylon. She spent two years of her life in neglect but bounced back pretty quick once she realized what true life was all about. You'd think she'd have tons of "baggage" but in some ways she is an incredibly easy dog. (Not destructive, pretty respectful playmate with new friends, shares well, beyond loving, doesn't mind being alone but adores when we come home, the list goes on.) My point there didn't really relate to this point except nature vs. nurture. I guess she was just meant to be a wonderful dog!
Tail pulling, huh. That's a new one for me! Have you posted play videos before?

re: Bruno, Chance and Fiona are brother and sister from our litter.

re: Emily, I've posted play videos, but it has been a while. Maybe with spring finally coming I can get some new ones out. :)