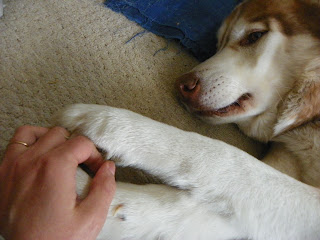 I was just sitting watching Brut and thought, I wish all of you could get to know him like I do.  He isn't the monster I once thought him to be so long ago.  Some may never get past his aggressive behaviors with other dogs and I understand that.  I used to be like that.  But one on one with someone he trust tends to break all those rules of what this awesome dog is like.

When I really take the time to get in tune with him and he feels safe and unguarded Brut is a spectacular being.  He has a very expressive face.  He can show you humor, disregard, or sarcasm with the quick switch of his facial muscles.  But it is Brut's eyes that set the stage.  Full to the brim with love, security and a burning torch that sets his face ablaze as each emotion flickers through. 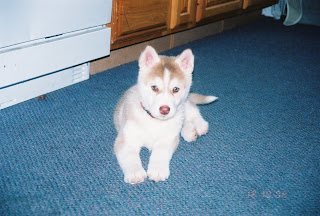 And as I sit with this magnificent being on the floor as he wrestles my hand for more face rubs, I think of what that terrible trainer/behaviorist said to us about Brut's aggression;  we were just managing it.  As if to say that we should be changing the behavior.  But from what I've witnessed about Brut for the last six years isn't a behavior problem.  I honestly think he has some form of brain damage from before we picked him out.  The similarities between Blaze, Chance and Brut's attention span is short and their emotional growth is slow.  All of them have anxiety and fear that can sky rocket..  And I know for a fact that Blaze and Chance were hit and I know that Brut was too.  And I find myself constantly grouping these three together as they are set apart from the other three dogs.  Brut, Chance and Blaze are a little bit special in a familiar way that goes deeper than just being father and children.  For if anything Brut should relate more to Zappa and Fiona (the two pups we kept from the litter), but it is their siblings, Chance and Blaze who left and were returned to us abused that I see Brut relates to the most.

So while I get to see a different side of Brut than most, I appreciate the whole package he delivers.  He's taught me things no human could have done in my own recovery and for that we have each other's back.  He used to scare me quite a bit, I never knew what to expect from him and now we have found an understanding that lies between and within us.  And full blooded love. 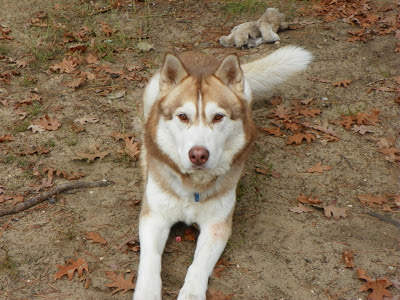 That is a lovely post. Brut is a handsome pup. We love the fact that you have bonded and find time for each other.
Have a fabulous Friday.
Best wishes Molly

He's lucky to have found his forever home with you.

I agree with Molly - this post was so special and filled with so much love and understanding!

not everyone is capable of handling a dog in need of space. He is lucky to have found you. But I agree, every dog has something special to share with us.

Brut has his own ways of being a special dog for you.

We just discovered about four different blogs that we have always followed were not appearing in our Google Reader. Yours and three others popped in there tonight with some very old posts. Not this one but some from February and early March. We don't know what happened but that explains why we haven't been here very much. So sorry. We hope it is fixed now.

Brut is an amazing dog. It always makes me think of Madden, just in the sense of not being good with other dogs. She has so much to give her family, she has personality traits and qualities I wish my own dogs have. She plays, and she loves everything SO much...just not other dogs. The joy someone could get from bonding with her will be without limits when they discover where she is waiting for them. :O)

We agree with Molly too! What a beautiful dog he turned out to be!

And I always love your descriptions of your dogs, particularly Brut.

I know that not everyone can appreciate the intricacies of a dog like Brut's personality, but it's so awesome to know that you do, and that you can share it with all of us.