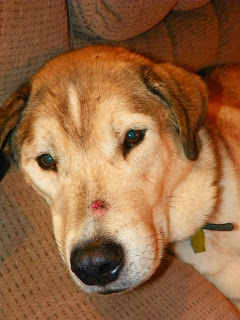 That darn Brut!!
You may remember our trip to the pet store with Zappa, who actually went inside the store.  We were in there to get a fitting for a cone of shame for Zappa.  This after Brut and Zappa got into a scuffle in an over excited rush to get a critter that was outside the fence.

Well, I had some concerns about the using the cone, because Brut would view it as a threat.  Anything that is extreme or changes his sense of order and knowing becomes an issue he will feel the need to address.  And not very nicely. 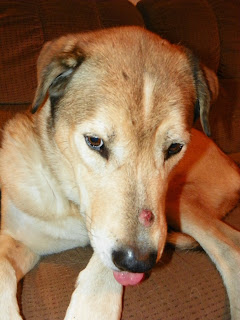 We had one last shot at an idea that hubby came up with before resorting to the cone and having to separate the boys.  We thought we would try a liquid bandage spray that we had.  Since the scrape was on top of his muzzle and he couldn't lick it, we thought it might be a good option.

It said to apply 1-3 times a day, but since it took two of us to do it, we only did it once at night, hoping for the best results.  I would cover Zappa's eyes with a washcloth, while hubby held and covered the top of his nose while he sprayed.

It worked like a charm.  Zappa left the site alone the entire next day and eventually the raw skin began to turn pink. 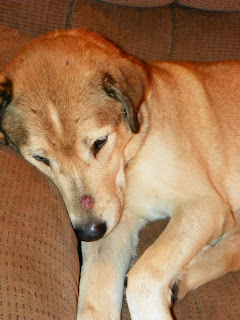 Mommy how much longer until it's healed?

We used this liquid bandage for about 5 or 6 days before we thought the sore was healing enough on it's own.  Zappa did still rub it a bit with his paws but the covering of the "bandage" helped to keep it protected enough to start healing.

We are so glad that this solution worked for us, because just a few minutes of the cone of shame on and we instantly had a problem with Brut.  This way we were able to avoid another aggravated mess and keep Brut in good spirits without ever knowing there was a problem.  And that made it all worth it for everyone! 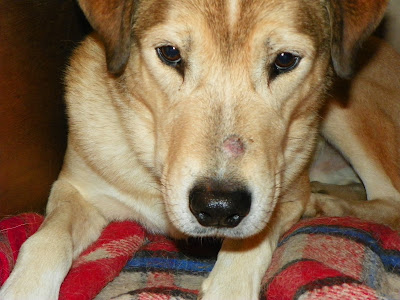