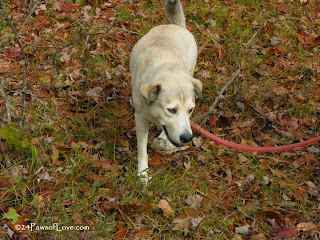 We had a pretty dreary weekend with lots of rainy skies.  It would downpour for several hours and then the sun would come out for a couple.  Well, it was during one of those breaks that decided to walk Blaze as she was next on the walking list.  Well, we weren't the only ones ones who decided to take advantage of the sunny skies, it seemed like the whole neighborhood was out walking their dogs and Blaze isn't good with other dogs.  I thought she was going to jump right out of her skin!  And I completely caught off guard.  Who would have thought in the middle of the afternoon people would be out dog walking??  A rare sight in this neighborhood.

I tried my best not to get frustrated and trying to stay as calm as I could.  I kept correcting her not to pull but it was difficult because she was wound up like top.  Blaze is so hard to control once she gets that high strung, so actually we did pretty good together under the circumstances.  The worse part is she doesn't seem to calm down once she gets razzed up like that.  So the walk really becomes a challenge.  At one point two dogs were behind us and once she knew that I had to cut into the woods and get them out her sight path.  Then I made the mistake of coming back out to the street, where the dogs had just walked, because I didn't want to walk in the drenched grass and she still went bananas sniffing their path.  It was a no win situation and I was just glad to finally make it home.

There were no more walks after that.  The rest would have to wait.  One crazy walk with Blaze did me in for the day.  Yep, I was all done.  And sometimes that's just how it rolls here at the 24 Paws of Love.  We pack up the leashes and save them for another day. 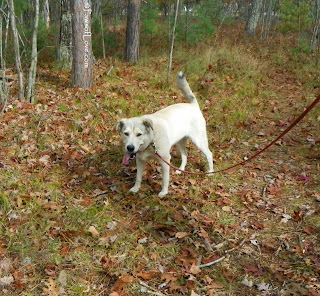