The Mom Cone of Shame

I am a horrible blogger and an even worse dog mom.

We went to Pet Supplies Plus to buy a cone of shame for Zappa who got a scrap on his nose from Brut after they went crazy over a critter.  And that's not the bad part.

The bad part is Zappa went into a store for the first time and I didn't have one photographic device on me to the capture the awesome moment!

I know, I know, what century am I living in?  Minus two points for mother of the year award.

Zappa even wore the cone of shame around the store.  (It was a good blocker for grabbing treats.)  bol! He did really great for his first time, like he'd been doing in all along.  I don't think his nose knew what to do being surrounded by so much food!!  In fact he thought he hit the mother load when he found some spilled food on one of the shelves.  Talk about a bonus!

We were basically the only ones in the store and Zappa was the only dog.  Which was a great first time advantage.  He was digging it.

I've only had to use the cone a few times.  We decided to try one last thing that we hoped would work first and got the cone for a backup.  We used a liquid bandage.  It's a spray on protective and is working really good.  Zappa is finally starting to scab.

So while I don't have photos of Mr. Boo-Boo or our first in-store experience, just imagine a happy dog surrounded by stacks and stacks of dog food, aisles of toys and goodies and being the calm, cool and collective dog that makes Zappa, Zappa. 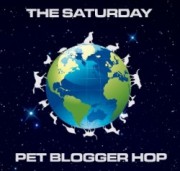 Posted by 24 Paws of Love at October 05, 2013
Email ThisBlogThis!Share to TwitterShare to FacebookShare to Pinterest
Labels: cone of shame, dog, photo