Luigi Quacked Me Up! 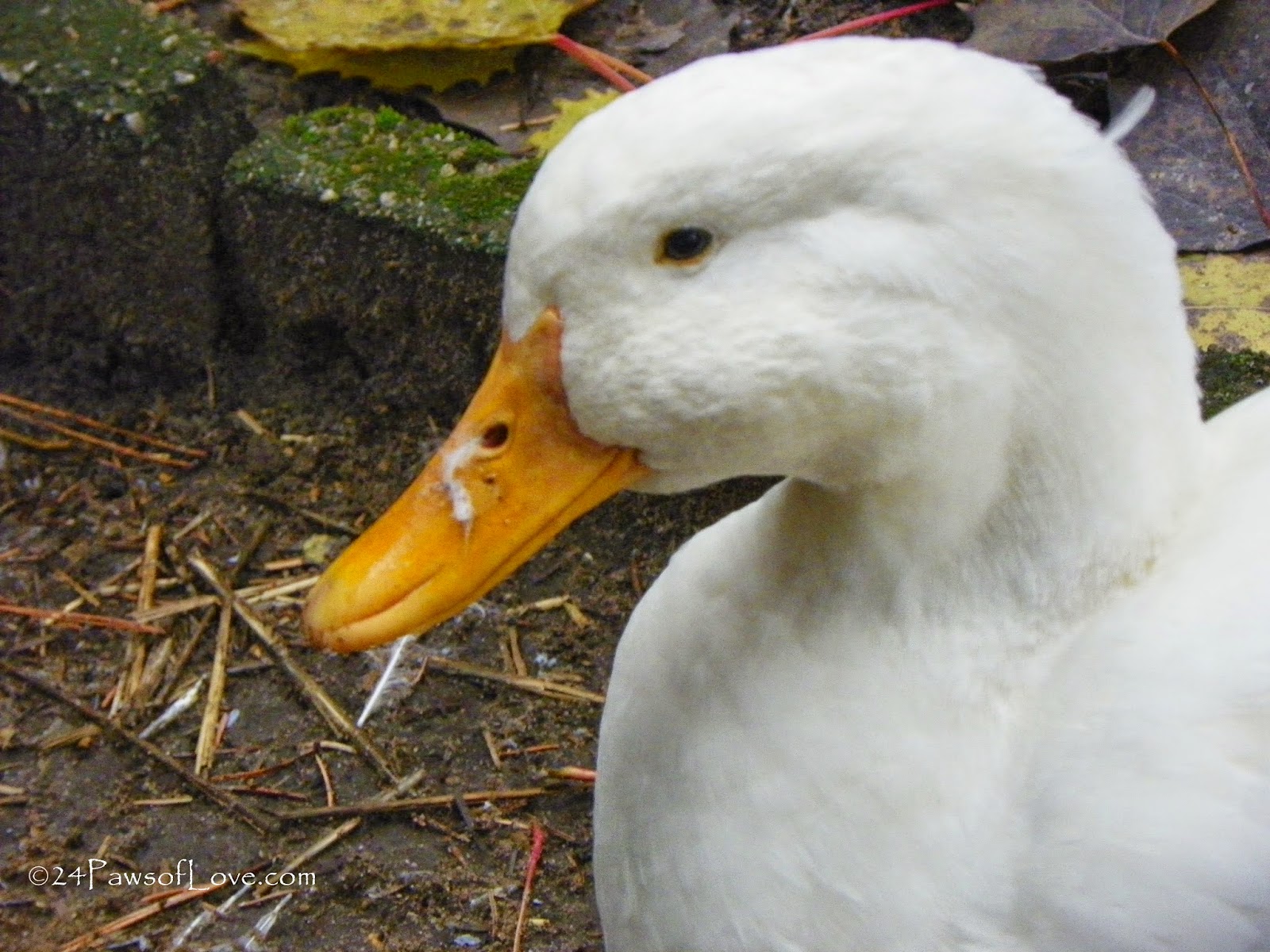 Luigi with his feather mustache.
He also had feathered beards sometimes.

It's been tough coming to the blog.  Even though I didn't post that much about Luigi, this was the only place I did...it is still sad.  He's been gone two weeks today and we got to know each other pretty well over the last 13 years. 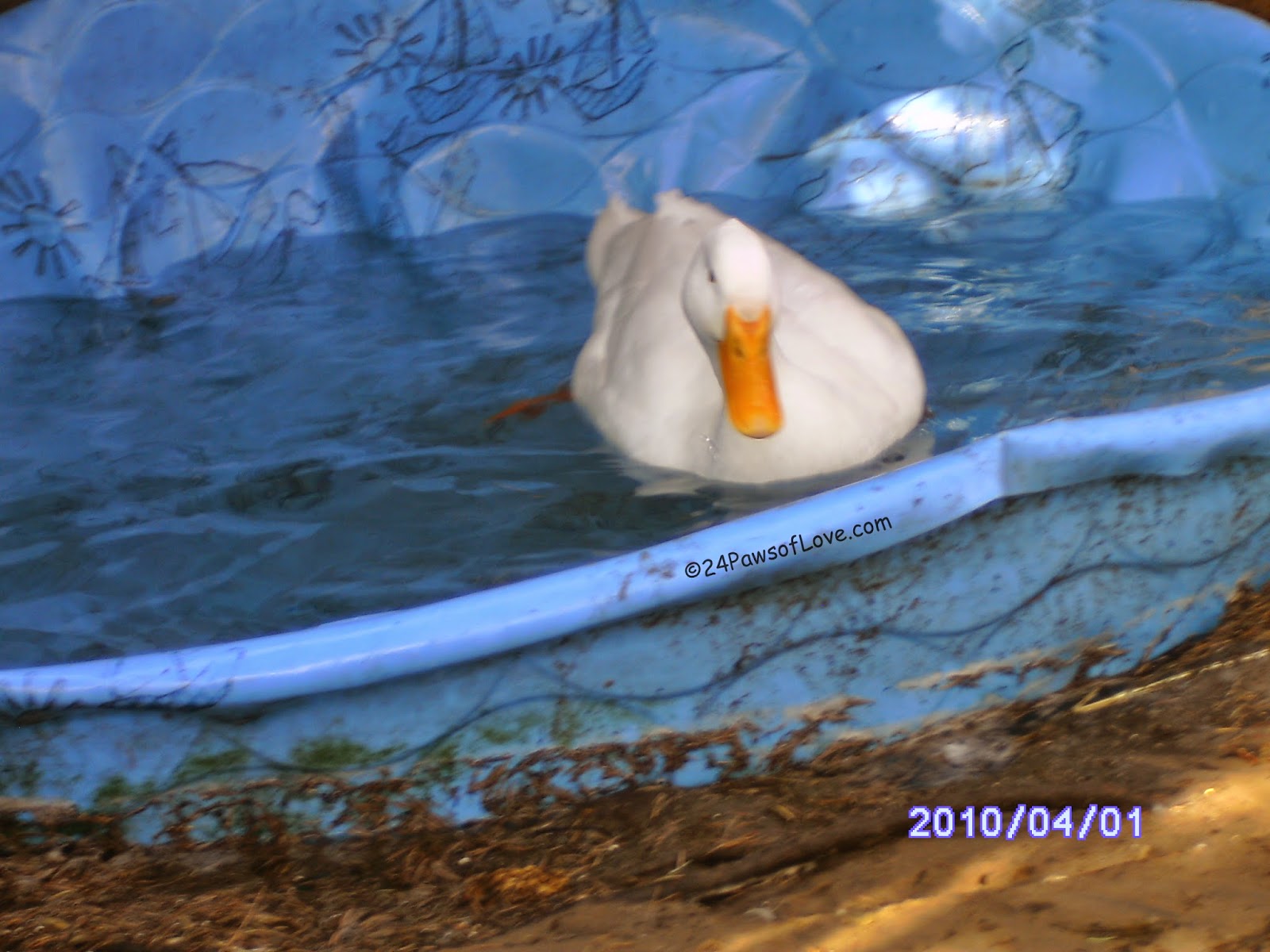 He never really quacked, it was more like a "wonk, wonk, wonk," but when he was hungry he QUACKED and stomped around like he was marching in a parade!  He was so adorable.

Or the times when he would be in his pool and would jump out, then jump right in, then jump right back out, then jump in, over and over again all the while talking to himself.  I can only imagine what he was thinking but it was so ridiculously cute.  He totally cracked me up! I really hoped to get on tape, but I was never prepared. 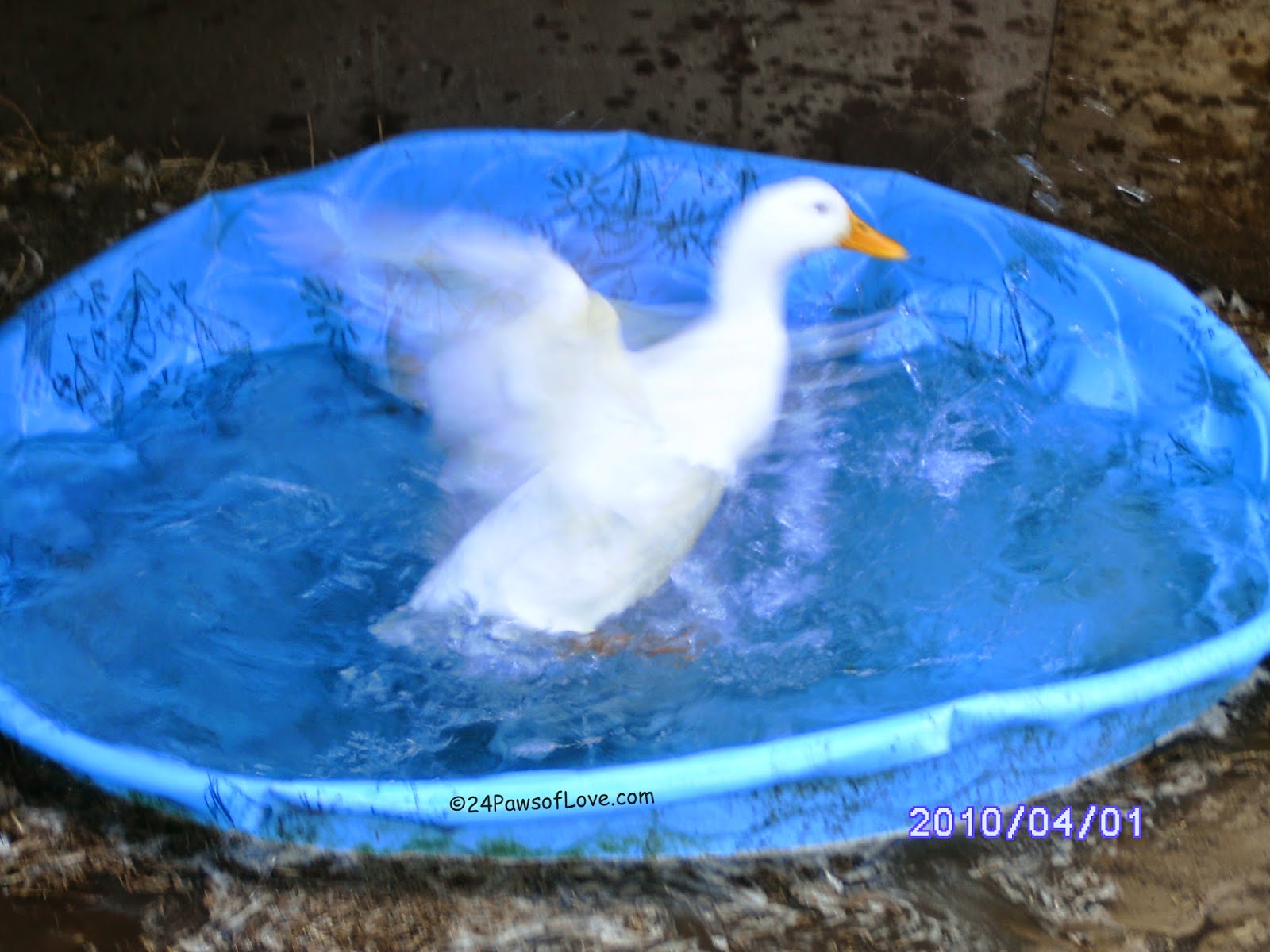 Sometimes he would just run around the pen, for no apparent reason.   His breed, Chinese White Peking, can't fly, but I've seen him run into the wind and get lift off.  That was really cool.  Sometimes he could get a couple feet off the ground if the wind was right. 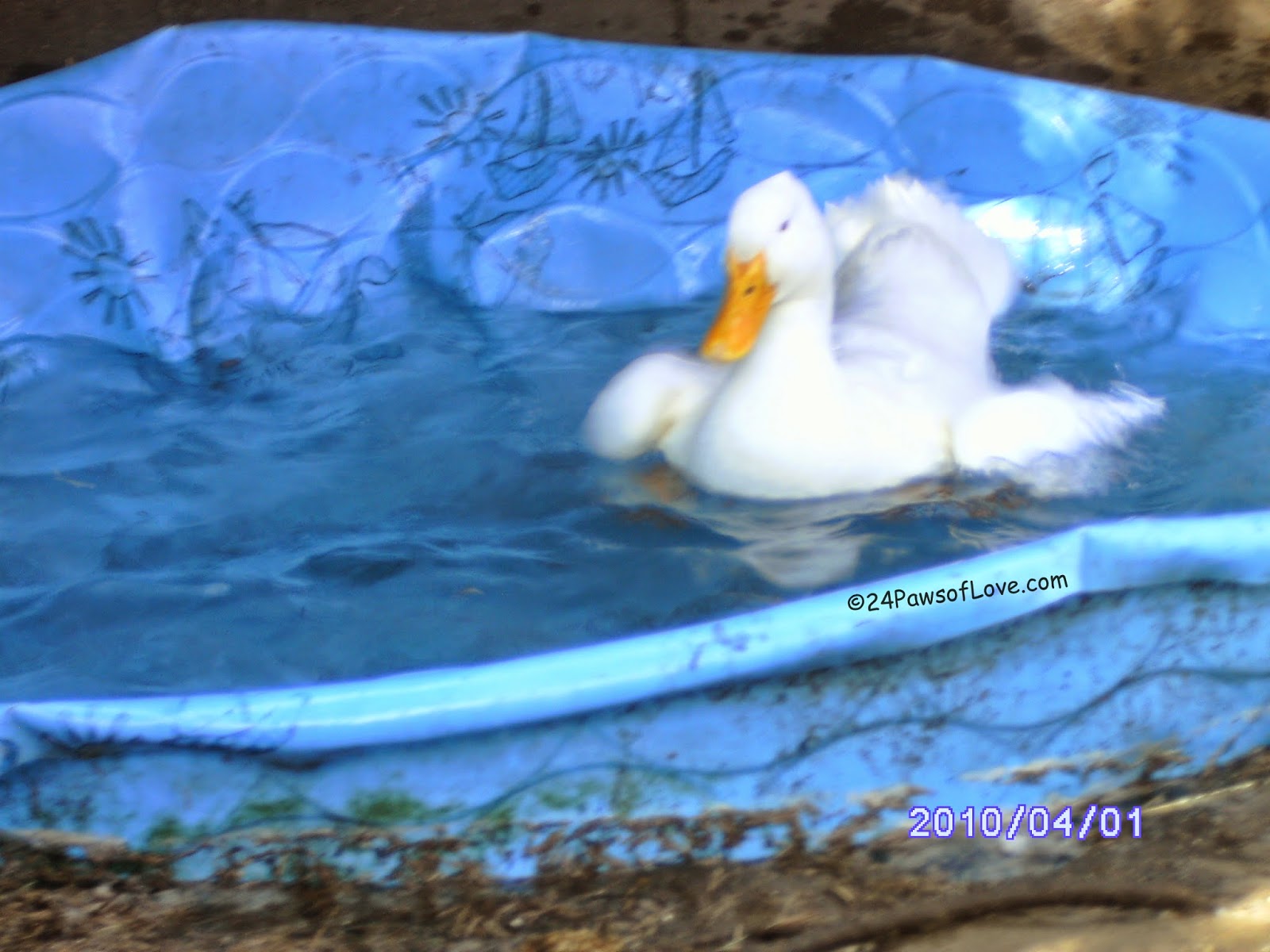 Luigi was as silly as he was proud.  There was nothing more he loved than taking a bath and primping and preening half the day away.  After all his splashing around in the pool he'd fluff his feathers for that studly duck look and right in the middle of his tail feathers would be a curled feather.  A sure sign of being a Peking male duck.  He was beautiful.

And although he had no one to get fussed up for the last few years, he had a couple of girlfriends in his time.  Sadly they both died before him, leaving him to be the lonely bachelor. 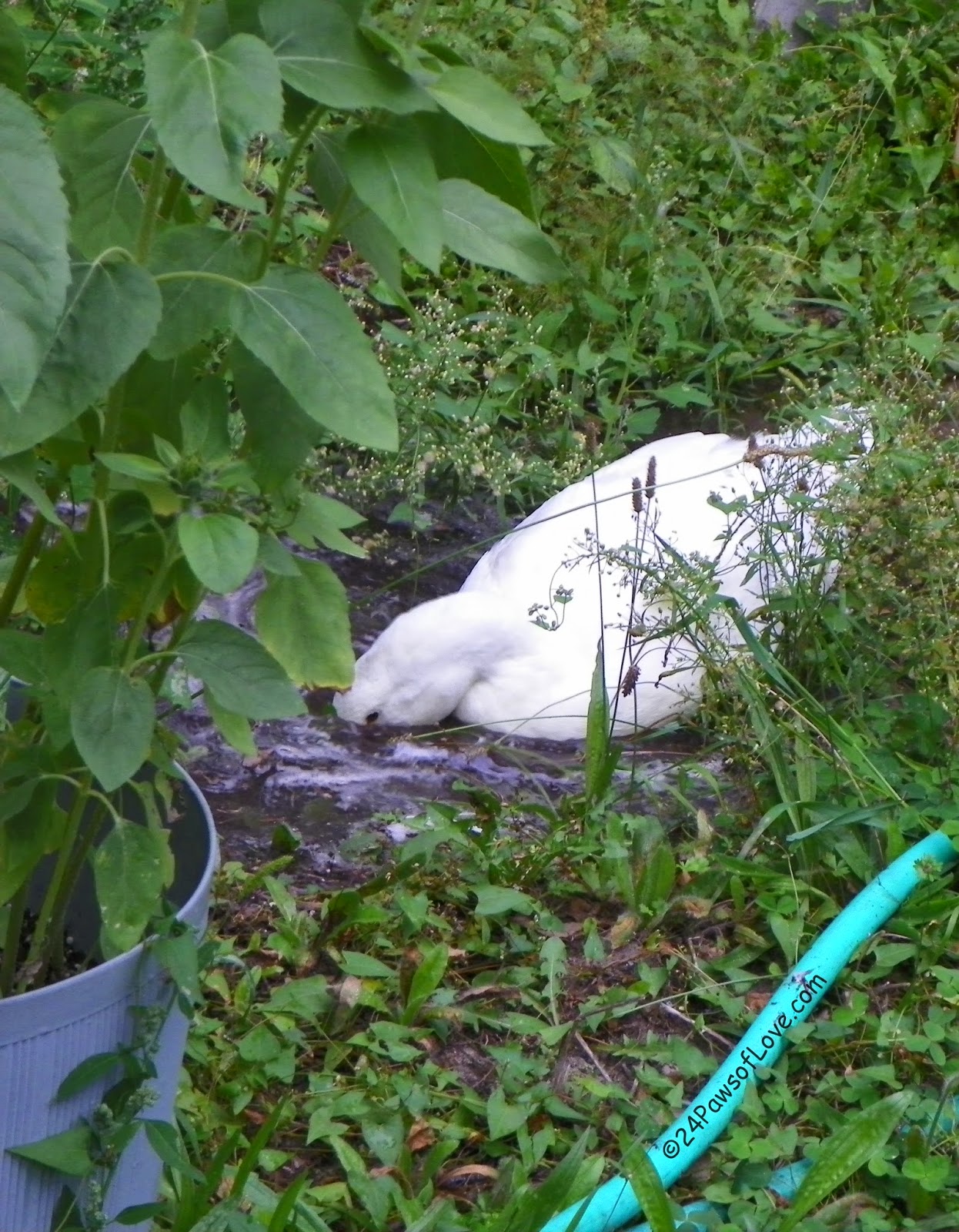 There were times I flooded his pen so he could play in the make shift marsh, which he just loved!  He'd be digging in the mud, just having the time of his life, when he would start stomping around in the water.  I never did figure out what this meant.  I don't know if it was part of hunting for grubs and slugs or if he was just overly happy.  To me it looked like he was dancing.  So cute!

Every so often wild ducks would fly overhead, quacking and Luigi would answer with a completely different sound that he only saved for the wild ducks.  It was very few and far between that he would answer them, but when he did it was more of a throaty quack.  Very interesting.

He wasn't very social with us except in the winter time when he was always glad to see me with water and food.  He would come running up to me and get quite close, but he never let me touch him.  As we bonded with food, I decided to teach him to eat out of my hand, using the same techniques I would use with my dogs to get close to me.  The success with having him eat out of my hand never ceased to amazed me.  Eventually he let me get even closer and so I could touch him, like with the slip of my hand without running away.  Each time was a like a miracle and I couldn't wait to tell my husband, Mark, about our latest encounter.  It was so beautiful.

And that was how it ended.  Eventually the only way I could get him to eat was out of my hands and when he became so sick, I was finally able to stoke those long, soft feathers on his back and wings.  We came full circle.  Luigi and me.  We became fully encircled. 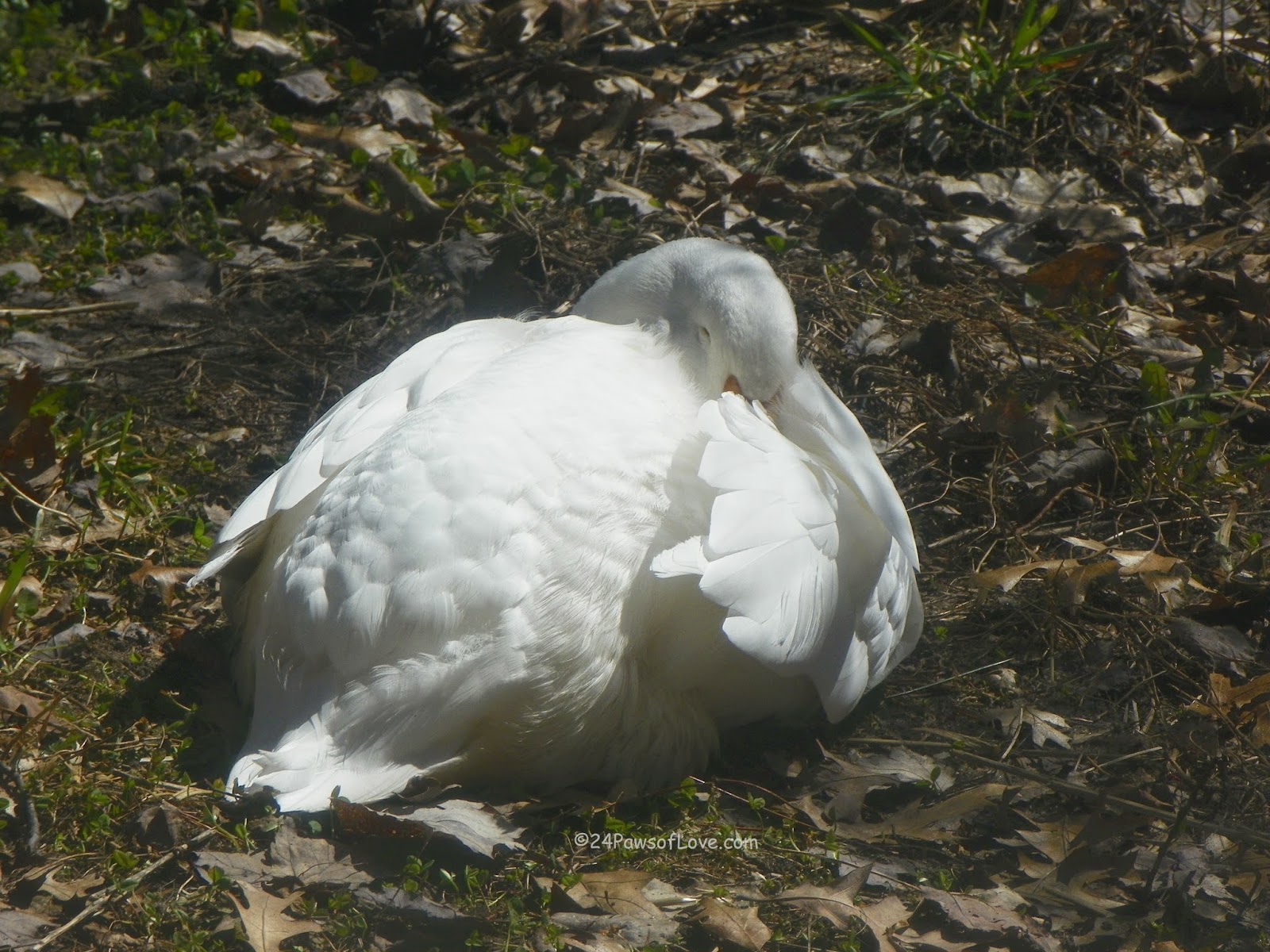 Hugs... He really was beautiful.

This was really moving. What a lovely bond you had with him. :(

Very sorry for your loss.
You gave Luigi the most amazing duck-life though - he had a long, beloved time.

It's nice that you have these lovely pictures of your friend. I know they just make you miss him now. But someday you'll be really thankful to have these memories.

With Luigi gone, I hope someone figures out how to make you laugh.

What a sweet duck Luigi was. I'm so sorry for your loss. I can tell how much it hurts you. I'm glad that you and Luigi bonded so strongly even though it hurts now.