How are the other dogs doing with Brut?

I don't know how dogs interpret illness and death, but I know that they do mourn.  And as I watch the process it saddens me greatly.  None of the dogs have any direct contact with Brut, they stay on the outskirts of him.  Some days it seems normal enough and on other days it just breaks your heart. 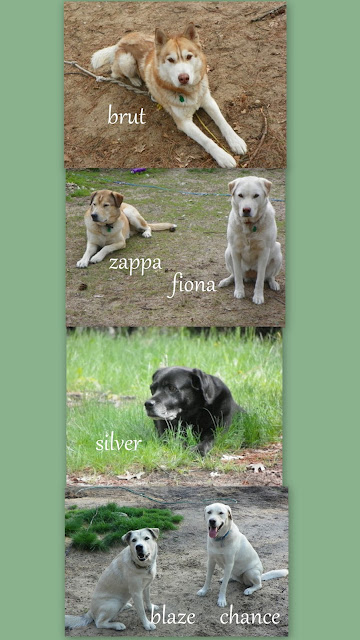 Silver is taking it the hardest being that she is Brut's one and only girl.  She is keeping a wide distance from Brut as she knows something is wrong and something wrong with Brut means aggression.  She has clung to me and Mark pretty tight these last weeks, except for the night Brut came home from ER.  She got within inches of him trying to give him kisses and wiggled her tail in joy that he was home.

I saw it happen again today...Zappa going after a chipmunk and looking to Daddy Dog Brut to join in.  Zappa looked back and forth from where the chipmunk was to his Dad.  He couldn't understand why his hunting teacher and partner wasn't joining him.  It was sad.  It is like Brut has aged 10 years and has the behavior of a senior dog who can't play anymore.

Fiona and Brut have a very special bond between them and it is obvious in these days that it remains unbroken.  For the most part she acts like things are same as always.  Fiona has no problem staying in the same room as Brut (unlike Zappa and Silver who will leave) and seems to be unaffected by Brut or anything that is going on.  She has always been cautious but comfortable around Brut. I know that Fiona knows there's something wrong with Brut, but if there is I can't tell.  She may be expressing something that I can't see, other than being quieter or softer.

Chance and Blaze have been my comforters and have given me that space I need from the situation when I needed it.  And I've been needing it a lot!

Blaze is very aware that something is wrong.  In the last couple of years, Blaze and Brut have been talking back and forth.  They have always had an interest in each other before Blaze was spayed last year and it was only natural for them to communicate.  It's been a year since she was fixed and the talking continues.  Blaze is also very sensitive to Mark, who has taken all of the news of Brut pretty hard, by crying himself to sleep with Blaze by his side.

There has been less howling since Brut came back from the ER visit.  They always howl for their supper at 4:30pm like clockwork and now there is a huge lull at that time.  Brut isn't as interested or just doesn't feel good to make a fuss about eating and no one else is doing it either.  It is really strange and a bit eerie, that no one else is getting excited about dinnertime either.  I guess this is our new normal for now.  :(
Posted by 24 Paws of Love at June 08, 2015
Email ThisBlogThis!Share to TwitterShare to FacebookShare to Pinterest

It is amazing how the other animals in the house sense when one pack member isn't well. I remember that with Pip ...sending lots of support across the miles