Something a Little Sweeter

Thank you all for bearing with us as we process and grieve Brut's death.  While still challenging and emotional, we appreciate your ear when I know it hard to listen about pain most of you have experienced before and I just want to thank you for bending yours.

So I thought I would share a beautiful love story in the making. 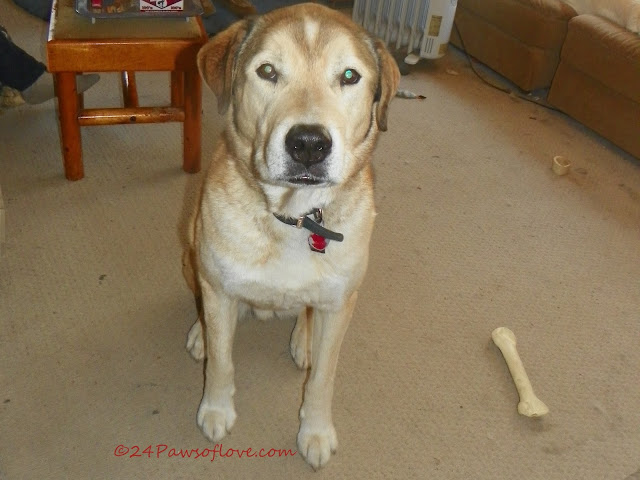 Zappa has always been Mark's dog from the minute he was born, Mark took care of the necessities to help bring Zappa in this world when Momma Silver didn't take right to him.  They have been tight ever since.

I had Brut and he was my dog.  It seemed equal enough.

Over time Zappa and I slowly began to get to know each other.  We really took our time.  And about that same time Mark was bonding more with Brut and having their one-on-one time.

Well after Brut died, I notice Zappa and I started to gravitate towards each other.  Next I know he was taking me under his paw.

I taught Zappa to sit and lay down with just my eyes for a treat.  Eventually he learned to do it without any inquiry from me to get his goody.  He sits down, then scoots his butt back until he's laying on the floor and then swing his legs to the side.  All the while giving me gentle paws to make sure he gets his reward.

Well yesterday he was laying down as I sat in my chair and was pawing at my leg to get my attention, but it was more like he was pulling down on my jeans. His eyes seem to be saying, "Come down here with me," like he was trying to get me to come down on the floor with him.

Zappa rolled right into my torso and I held him.

Which is odd for Zappa because he doesn't like to be held very long nor does he lay down for very long.

But that day, he did. 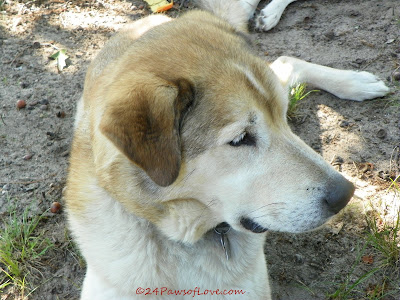 For love.
Doesn't that just melt your heart?
Posted by 24 Paws of Love at September 14, 2015
Email ThisBlogThis!Share to TwitterShare to FacebookShare to Pinterest
Labels: Zappa

The amazing love and intelligence of our dogs never ceases to amaze me! What a great and wonderful story! Please continue posting your fantastic blog.

Thank you Sherri, your comment means the world to us!

I write this as tears flow............Thank you for sharing your lovely story! Actually I adore my 5 dogs more than 99% of the human race! My son will finish his last 3 months of Vet school, although he has passed his boards and is a Doctor! He will be fantastic as he loves animals as much as we do. I look forward to getting to know you. Peace & Pit Bulls!!!

Hi Kimberley. Thank you so much for your touching thoughts. Our dogs are our best friends. Congratulations for your son! Do you have a blog as well? Could you send a link? Take care and thank you again for stopping by. :)

You can never predict who is going to blossom and give a special gift udring times of transition. It is wonderful to see you and the dogs drawing together in new ways to heal.

And Siku it is so sad and beautiful all at the same time.

Having been through a number of deaths in our pack, I always end up saying that "every ending is a new beginning". It's painful but it's true. Your story is wonderful... go with it and let Zappa help your heart.

KB-I'm speechless...what beautiful and true words! Thank you for your insight.