Christmas Header-Now there are two 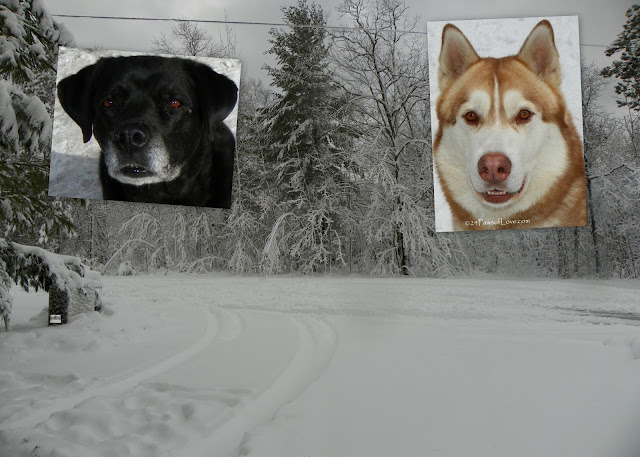 I was going to wait until Christmas Eve to unveil the header, but what fun would that be?  :)

This year's Christmas header was especially difficult.  It was hard to find a good face shot of Silver.  Which meant I went through almost every picture I had of her.  After two weeks of looking, I finally broke down and cried and cried and cried.  Last year at this time Silver was sick from cancer and we were trying to get her to eat.  As much as it all hurts, at least she is free now from all pain.

Taking pics of the kids was pretty easy.  They'll do anything for a treat...well, almost anything!  They are part Husky you know.  For Chance and Blaze it is second nature for them to pose, they are like professional models.  It's a little different for Fiona and Zappa, as Fiona doesn't let Zappa get too close to him when there are treats.  She is so much like her Father, Brut.  lol

One thing I realized looking through all those pictures of Silver, Brut and family, is that I didn't have enough.  I went through a couple of really tough years of depression and I barely took any photos those years.  I have repeated this same cycle grieving through Brut and then Silver.  I don't want to look back and not have enough memories of my puppies.

p.s.I'd like to thank my husband for the awesome design idea for the Christmas header.  It was all his idea.  All I did was take and find photos and put it all together.  ;)

We make a good team.

Posted by 24 Paws of Love at December 20, 2017
Email ThisBlogThis!Share to TwitterShare to FacebookShare to Pinterest
Labels: Brut, Christmas, Silver

I really LOVE the new header and I'm glad you posted it early. I understand about the photos. The last few years with Pip were really rough for me and although I did take photos of him, I didn't take any of us together and I really regret that.

I adore that header. It's wonderful!

It's a beautiful header! Hugs to all of you!