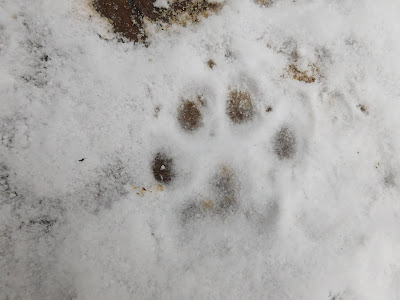 This last week with Christmas as been touch and go as far as walks.  Then when the temperature plummeted, the dogs and I were feeling so disconnected from each other.  There isn't much "playtime" with these four, not even between them anymore.  There only form of chase is chasing squirrels and even they were few and far between with the dipping temperatures.  So walks are pretty important on all levels, including me.

Everyone was feeling it yesterday, but our chance finally came today as the temperatures rose to 15F.  I didn't feel like going out in the cold, but I know I had to take the opportunity and it was so worth it!

I took everyone separate.  It's easier on my back that way.  It wasn't as cold as I thought and it didn't take long to get into the grove.  Zappa was first as he usually is.  He's my easy walker until he gets by himself and wants to direct the entire walk.  He's so bossy!  :)

Fiona wanted to walk through the woods.  The trudge through the thick snow was difficult even with snowmobile tracks going down the path, but at least there was some kind of path.  The walk was short and sweet, just like Fiona.

Blaze wanted to pull.  And I mean PULL.  I was so tempted to hook her up to the sled and let her take me down the road.  She was so focused and centered.  And the road...the road was perfect for sledding.  But I resisted temptation, wrapped the leash around my shoulder blade and let her pull me up and down the road.

And then, last but not least was Chance.  My sweet boy Chance.  He has a way of wooing that sends tickles up and down my spine.  He had become the grouchiest of all the dogs with that lack of connection and finally we were going to connect.  To the road, the snow, the cold and to each other.  And that we did.
Posted by 24 Paws of Love at December 28, 2017
Email ThisBlogThis!Share to TwitterShare to FacebookShare to Pinterest
Labels: Blaze, Chance, dog walks, Fiona, winter, Zappa

Wow, 15 degrees is the warming trend? So glad you got to spend some special time with your pups. Hope it's not too cold for you to do it again soon.

Awe, that's nice that you were able to walk each separately - though cold for you, I imagine! Ruby is not a big fan of the cold and getting her to go for a walk has been a struggle. She's stubborn. I am hoping things warm back up later this week so we can get back outside more.