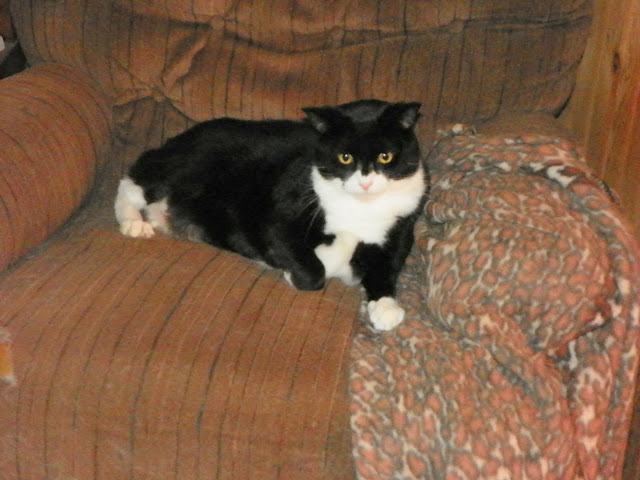 Our cat Boxer was meant to be here.  Little did I know that through all our aggravation we dished out to each other, he was going to teach me a valuable life lesson.

I got Boxer as a kitten, just 22 days after my heart cat, Sparky died.  Sparky was my first pet and he was the coolest cat that acted like a dog.  He made me love cats like I didn't think was possible and losing him was devastating.  He had been through every significant point of my life up until his death.  I grieved hard for several year over Sparky before I was able to let him go and come to peace with his death.

So what was I doing getting another cat so shortly after Sparky died?

I don't know.  I just felt lead to Boxer.

Until he pooped in my lap when we were taking him home.  Then I began to question the mighty force that brought us together.

Boxer was all spit and fire.  A wild child who was the exact opposite of Sparky cool and calm nature.  It was after we got Brut that Boxer became obnoxious, pushy and demanding of me.  I had a hard time accepting Boxer for who he was because I was still grieving heavily for Sparky.  The emotional pain ripped through me and the more Boxer demanded to be noticed, the more I pushed him away.  I almost couldn't stand him sometimes.  I'm not kidding about playing aggravation with each other.  We learned to push each others buttons in the battle for each others love and attention.  I wanted a Sparky cat.  Boxer just wanted me.
I'm not sure when the breaking point was, but we finally broke through to the other side.  It wasn't easy.  It wasn't fun either.  But we finally began to understand and accept each other for the other and slowly have come full circle.

I never doubted that Boxer wasn't meant to be here with me.  I believe everything happens for a reason and what I went through with Boxer was no different.  He taught me that it isn't healthy for me to get another pet without fully going through the grieving process.  Waiting until I find that peace and serenity after suffering such a loss before bringing new life into my heart.  I don't want to put or go through what I did with Boxer after losing Sparky.  It was too hard on him and too hard on me.  Learning that hard lesson I absorbed through my relationship with Boxer is one of many reasons we are waiting to get a new dog after losing Brut and Silver.  I have learned that for me, I need that space and grieving time in order to really come to some peace about the death of a pet.

I do believe everything happens for a reason and looking back I was lead to Boxer.  And I am ever so grateful.
Posted by 24 Paws of Love at January 22, 2018
Email ThisBlogThis!Share to TwitterShare to FacebookShare to Pinterest
Labels: Boxer, death, death of a dog, grief