I always have a difficult time when I'm trying to express my love on paper for our four dogs, Chance, Blaze, Zappa and Fiona.  It is hard for me to put my feelings into words, which I normally don't have any trouble with doing.  I also find it hard to talk about the four "pups" without referencing Brut and Silver in some way.  The qualities of their mom and dad really shine through.  I don't know that I could talk about the "pups" behaviors and temperaments without bringing up Brut and Silver, being that these four are their kids.  They display so many qualities of their mom and dad and having lived with all of them, they have for the most part, become meshed together.  The way they think, feel and respond to us and each other, we have some how become a unit, even with the division of the two packs.  And without Brut here as the top dog, taking all the attention and energy, the four are on even ground.  A parallel playing field if you will.  These four are ALL alpha dogs in their packs.  Hubby, Mark and I are the top dogs now, without Brut, making it centered, with all of the rough edges smoothed out.  There is actually gravity with a solid anchor holding us with an even stronger connection and foundation.  Like Brut's true spirit in leadership has infused us together.  I would have never thought that Brut being gone, would make us so much stronger as two packs and a family as a whole.  Brut was a very powerful dog.  Physically, mentally and emotionally.  He just reverberated with strength.  Imagine the most important being in your family that everyone is drawn to and for good reason.  Now imagine them gone.  The void is enormous.  Your stomach falls to your knees feeling.  You can't grasp your breath.  Your whole life was center on that one being.  This whole blog started out because of Brut.  I have been lost for three years trying not to talk about him.  But I can't.  Brut is in every fiber and being of his kids.  They are excerpts of every personality that Brut had...and I can't just forget about him.  Brut and Silver's death balanced the scales of two extreme dogs.  And while it was both Brut and Silver's death that brought such harmony, it is the Brut in them that is the loudest.  As it should be.  I am living in phenomenon that is unfolding right before my eyes.  Every day.  I can't get over the equality that is between the four dogs currently after Brut stole the spotlight  when he was alive.  He ruled everything. 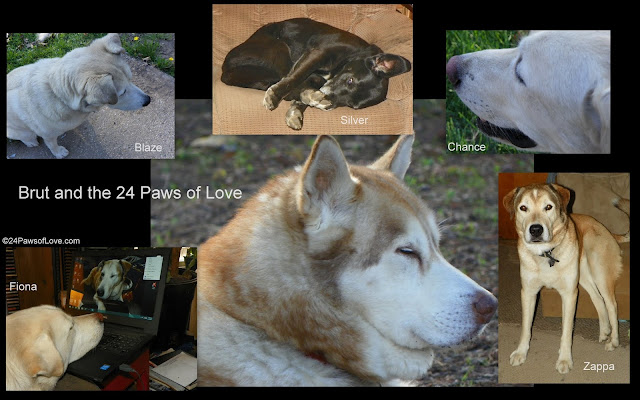 Brut's spirit has woven our family together, pulling it tight like a drawstring.

It is comforting and mind blowing at the same time.

That is just how Brut was.

And still is. ♥
Posted by 24 Paws of Love at June 26, 2018
Email ThisBlogThis!Share to TwitterShare to FacebookShare to Pinterest
Labels: 24 Paws of Love, Brut, spirit, spiritual connection

I can feel how important each and every one of them are to you. The way you described the whole picture it was beautiful, and healing.

Thank you Deb. What a beautiful thing to say.