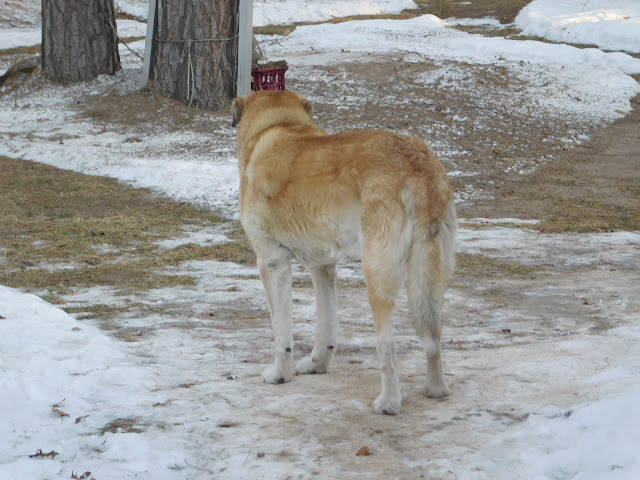 I don't know why it is so hard for me to write about Zappa.  Being that he is the last "puppy," I feel protective of him.  Also it is hard to write just about him without missing the others.  Not to mention we don't have that deep seeded bond like I did with the others.  Oh, we love each other and have our moments together.  He comes to me when he needs something or wants me to interoperate for him or if he is scared, but honestly our relationship is on a need to know basis.
Zappa is Mark's dog, his heart dog.  Their closeness started the minute Zappa was born.  As Momma Dog Silver was a new mom, and was too busy cleaning herself up after the birth of her first born to take care of him.  Mark, took right over cleaning up Zappa, cutting the cord to get him ready for his new world and they have been tight ever since then.  And if that wasn't close enough for Zappa, now he has his heart boy all to himself and only has me to battle with for Mark's affection and love.  It was why the sleeping arrangements didn't work out between Zappa and I, he needed Mark.  I have felt hurt and rejected because Zappa will only let me get so close to him, but have learned how important and precious his relationship is with Mark and the opportunity to have Mark all to himself, that my feelings have grown to one of respect and adoration.  They both need this time together and each other, without my petty feelings getting in the way.  After all I took care of five dogs that I was able to have a special relationship with, it was Mark's turn to experience the beauty of having a heart dog.
Zappa has come a long way this past year.  He is still getting his cold laser treatments on his hips, back and legs twice a week.  That is going good.  We switched to a closer vet for those treatments, as you may remember, Zappa stands in the van for the whole ride.  So, instead of standing for three hours round trip, he is only standing an hour, and it makes a huge difference in his recovery time.  We are still struggling to find a calming chew that will take the edge off Zappa's anxiety without drugging him.  Although, it is possible that we may never be able to curb his nerves about riding in the van and going to the vet.  We are going to try desensitizing him to car rides and the vet, to see if that helps.  Yeah, good luck with that!
In December his liver levels were slightly up and after having a ultrasound of his abdomen, all of his organs were great, except his gall bladder had some sludge in it.  Whatever that means.  But it is nothing serious, just part of old age and could be the cause of the rise in the liver.
Our vet found a growth in between his front toes and had it checked out.  It wasn't cancerous!  Yay!  That was a little scary, but it looks like the growth is shrinking, which is also good news.
It looks like Zappa has accepted us as his pack members, since losing his brother and sisters.  We are settling in as 3-pack group. (with a couple of cats on the side.)  I have no doubt Zappa still thinks about his siblings.  He still has moments of sadness and looks lost.  I think he misses having a dog around to be a dog with, but neither of us are ready.  I also know he enjoys all the special attention he gets being an only dog and I believe right now that makes up for not having another close canine around.
Overall we are holding our own.  The year anniversary of Blaze's death is coming up in March with Chance and Fiona to follow in May.  Hard to believe it has been a year without them and having only Zappa.  Thank God we have each other or none of us would have made it through this alone.
We are taking everything day by day.  Praying that Zappa makes it through winter to spring, is my only goal for him.
Thanks for hanging in there with us.
God bless.
Posted by 24 Paws of Love at March 02, 2022
Email ThisBlogThis!Share to TwitterShare to FacebookShare to Pinterest
Labels: Zappa

I love this post, because I totally understand what you are saying. And it's good to know I'm not the only one who doesn't always feel that strong "heart-dog-connection" with a dog that we own. Like you with Zappa, we've had dogs, and have one right now, our foster boy Jack (black lab) that clearly loves and adores and prefers Carl, my husband, and his heart and soul belongs to him. I'm okay with that - Jack needs his one person, it's what he knew before he came to us. We've also had dogs that I knew they were only to be with us for their last chapter in their lives for us to care for them, but they won't be and are not waiting at the 'bridge for us, they are with the ones who loved them first. And knowing that provides comfort and reminds me that I'm part of a bigger plan. I've been blessed and so lucky to have had more than one heart dog, and I'm grateful for those connections that are part of my heart and soul and I've a feeling, are part of theirs too. And I can't wait for the day when I'll get to see these precious dogs and cats again. ❤ ......thanks for letting me ramble! 😊

And I really, really do hope Zappa makes it to your goal and beyond. I have a feeling that he will.