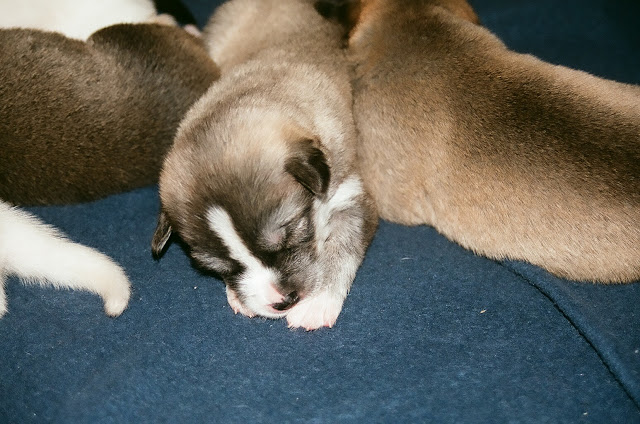 That white streak is how Blaze got her name.
Little did we know she would give it a whole other meaning!
Blaze was born of Silver and Brut's litter.  She was the ninth puppy born.  And she was a natural born instigator.  Always starting something.  She was that way from the time she was born, until the time that she died.  It was an infectious quality she had.  I didn't always appreciate it, but learned to love her more for it.

My first real memory of Blaze, (because her birth is a blur now) is when she was about 2-3 weeks old.  All the puppies would be settling down for a nap, getting all cozy with each other, and here would come Blaze pouncing on everyone with that baby bark, "Get up! Get up!  She was hilarious.  I still crack up when I think about it.  I can't stop laughing about it now. 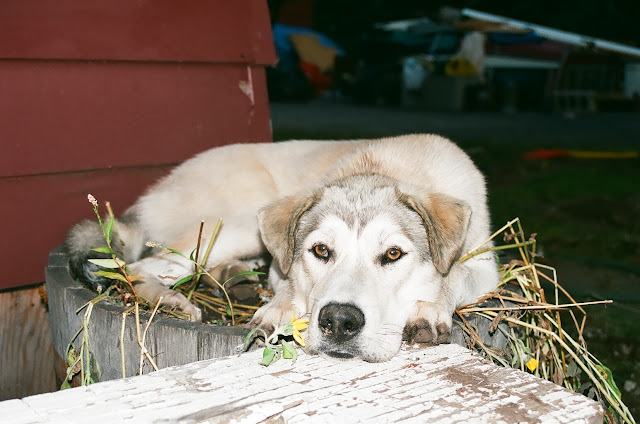 My flower barrel became a favorite spot in those early days back home.
My second vivid memory of Blaze is when her previous owners gave her back to us.  Our four dogs, were out back playing and Blaze's high pitched bark was rapidly firing off from the kitchen.   The dogs had rejected her when she came home and she so desperately wanted to play with them.  Well, I walked in through the door to the kitchen expecting to see her at the door, I followed her voice and there she was on top of the kitchen island!  Blaze was all fired up, shaking her tail and head and yipping with this huge smile on her face.  I was shocked!  This girl was crazy!  I even went so far as to put up a fence around the island table and the kitchen counter trying to stop her.   That lasted about a half a minute when I realized I couldn't use the table myself.  lol  I worked with her to stop jumping on the the counter and table, but I don't think it stopped until Chance came back.  She finally had another dog to play with and call her own.

There was the time she jumped in the car when we went to visit her with her owners.  She was ready to come home then.  As it turned out about a week later was when they returned her to us.  She was so spot on!

I spent several months sleeping on the bathroom floor with Blaze.  She had been so hurt by her owners that she was a shell of herself.  She wouldn't sleep next to me at first, but over time she would lay down by my feet.  I remember how timid she was doing that, that I just held my breath when she did come on my blanket.  Tiny amounts of trust started in that bathroom. 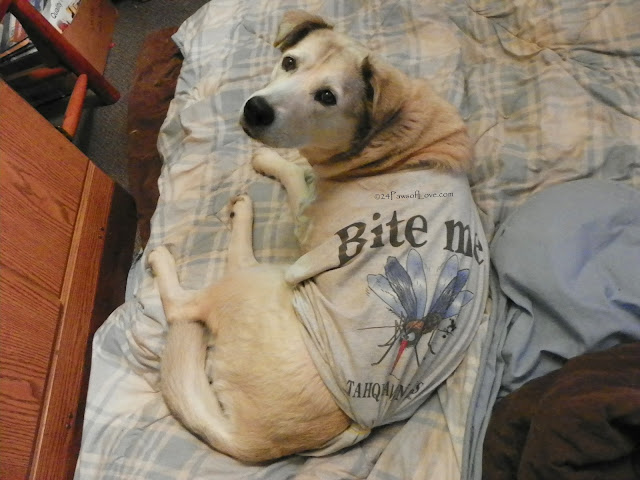 After her spaying.  If Blaze could talk!

Blaze was so whip smart!  After the trust was built, there was no stopping her.  I was so intimidated by her intelligence.  Those wheels were also turning!  We were always trying to outsmart each other, but somehow it seemed Blaze was always on top.  I especially noticed it when we were on our walks.  That mind of her was always working on ways to pull me along.  I threw my hands up many a time walking her that I would just turn around and go home.  She was too much for me some days.

I'll never forget the time Blaze and I had a frustrating day together and I was at my wits end.  It was my turn to sleep with her and I was trying to find a way for both of us to wind down for the night.  (This was before Chance had come back)  When I pulled out a tub of vanilla ice cream for us to share.  Blaze loved it!  She began to calm down and I began to come to.  She was so in love with ice cream.  That was the first time and it wasn't our last.  But I was loving our girls night together.  Blaze made everything she loved to do into the most exciting thing in the world.  I loved that about her.  Didn't matter what it was, if she was excited about it, she loved it! 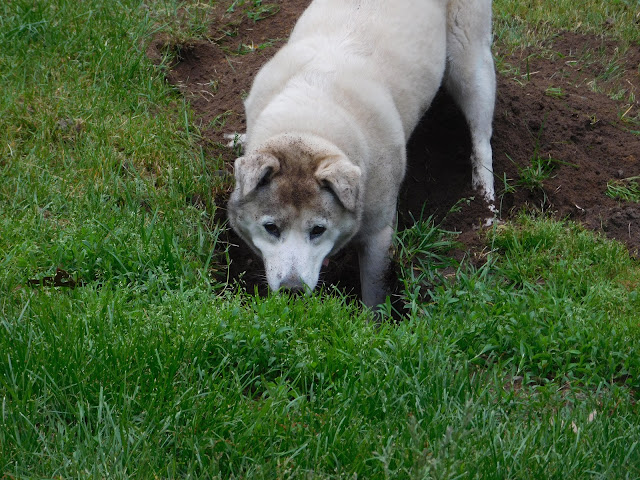 Blaze didn't just dig...she built trenches!
One thing Blaze loved to do was run and being a part-time Husky she was born with the perfect frame and drive to pull a sled.  Don't let her 63 pounds fool you, she pulled me behind her effortlessly.  It was one the most beautiful things to experience, as she moved with fluidity and grace when she pulled.  It was breathtaking.  It came to her as natural as breathing.  As exquisite as she was, her long body galloping down the snow covered trail, there was a twist, she was still Blaze.  When she pulled she was on a mission, she knew she was in charge and she took that freedom to new heights every time when sledded together.  Her goal:  to look for dogs or go where ever the hell she wanted!  We were lucky though, we only had one encounter with a couple of dogs and their owner and just made it out of there alive.  (Something I'll share at another time.)  Blaze had a mind of her own and if she could get away with it, she did.

Blaze was an amazing dog.  A little of everything you want and don't want in a dog.  Her spirit just vibrated with life, love and happiness.  As it still does today.  We were doubly blessed when she came back home and to have lived the life we did with her on Earth.  And we can't wait for our heavenly reunion someday.

We miss you Sweet Pea.  You will always be our Baby Girl. 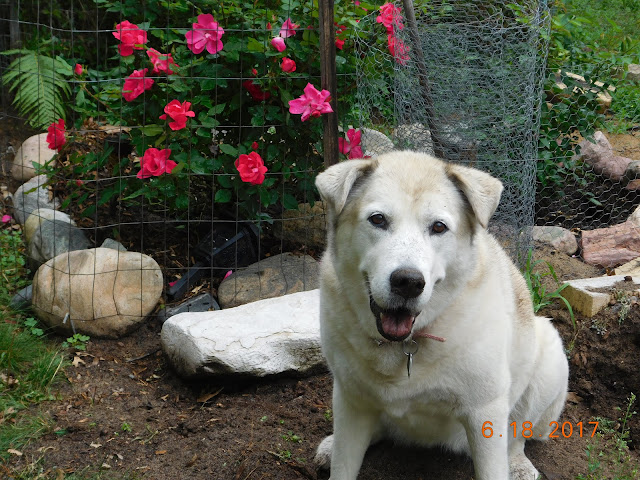 A chip off the ol' block.
Smiling in front of Daddy Dog Brut's roses.
Posted by 24 Paws of Love at March 14, 2022
Email ThisBlogThis!Share to TwitterShare to FacebookShare to Pinterest
Labels: Blaze, death anniversary of a dog

How wonderful it is to find a companion like this...frustrations and calm moments alike show that she was where she was supposed to be...with her person. Someday, I can't wait to meet her and all the others. And the humans too, of course.

You and Blaze were so lucky to end up together. I'm glad that she came back home, and I'm glad that all of you figured out how to be happy together. I love the vision of her galloping down a snowy trail pulling a sled with you in it. This was a beautiful tribute to her.

A beautiful tribute for an absolutely beautiful girl. You were so lucky to have found each other in this world. <3

thanks for your article,