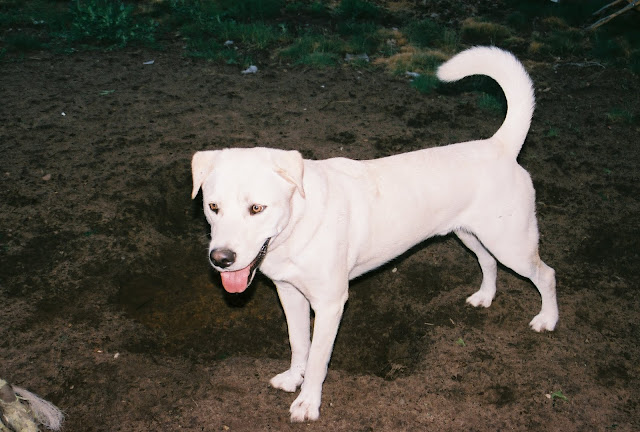 As the weather gets cooler, the dogs get friskier and it becomes a chore to walk them.  This is the time I start incorporating pulling into their routines.

Yesterday I had Chance pull me on the bike.  I decided to take him by himself, because one dog is easier than two and I wanted him to show me what he had.  He took off into a strong run with no problem for the first quarter mile.  When we got to the next road he went between a run and a strong trot.  I encouraged the trot because running through the neighborhood there is the possibility of another dog out running loose.  We lucked out, no dogs.  Turning him around was difficult, but easier with one dog.  Now came the real test, was he going to get back in the groove of pulling after the turn around?  He did.  He began to pick up speed and continued running and trotting.  My goal, other than hanging on for dear life, was teaching him to slow down, stop and go.  All of which he did fine.  We turned down another road where we had to turn around and he did even better on the turn around.  It helped that I didn't come to a complete stop for our U-turn, and it began to click in what I was asking him to do.  He only stopped a few times and he brought me home safe and sound.

I really let him run the show by encouraging what he was already doing.  If he was trotting I would praise him for what he was doing.  If he was feeling comfortable running I would encourage that as well in the same way.  I haven't used much in the way of commands, except for stop.  He knows what "Stop" means walking and he is beginning to make a connection what it means while pulling.  All in all it was a good, safe ride and one I would like to continue working with him on.

I'm learning right along with him.  This is all still very new to me as well.  Chance's work attitude helps in completing a task with him.  He takes all his jobs very seriously and is a great student, making me want to be a better teacher for him.  Even with one dog it is amazing how fast they can run and I find being pulled a little scary. The speed makes me feel out of control and it doesn't help going through the neighborhood either as I find myself concentrating on Chance more than what's going on around me.  This is why I try to encourage trotting because it makes it easier to scope the area and keep an eye on Chance.  I'm beginning to see real potential with Chance.  I am amazed with his commitment to his mission and how he takes his responsibilities seriously.  He is like that with everything.  The boy is dedicated which makes him a real joy to work with.
Posted by 24 Paws of Love at September 10, 2010
Email ThisBlogThis!Share to TwitterShare to FacebookShare to Pinterest
Labels: bike, Chance, dogs, pull, run

That was a very nice award from Roo - congrats.

Phantom loves to pull and Ciara isn't far behind. But Mom says she is too old for the bike thing now. She would love to have a scooter but worries about falling off. It sounds like you are doing really well with Chance.

OP Pack, I use a 3-wheel bike, I could never do this on a two-wheeler, lol I love the added security.

Peggy, yes it really is amazing how being able to trust each other makes such a difference, escpeically doing these pulling exercises. I love your insight.

that is pretty cool having chance pull you on a bike.