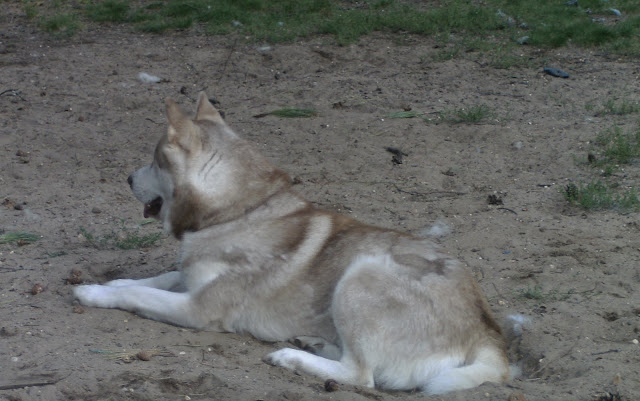 Brut ran around the yard with it a couple of times then I let him settle down.  I threw a treat to the side.  No go.  That's when Brut must have noticed the fistful of treats I had and began to walk over to me, leaving the squirrel.  I was in complete shock.  Brut WILLINGLY abandoned his prize possession and let me cover his catch without trying to stop me.  I was flabbergasted.

I grabbed him by the collar, not sure of my next move.  The rest of the troops had witnessed what happened and were waiting at the door.  I usually put Brut in the house at this point in order to take the little critter to the squirrel cemetery at the woods across the street, but I was also trying to avoid a fight with the rest of the Back Dogs right at the door.  So I took a chance with Brut right there and quickly scoop his find into the bucket. I have been working on Brut's possessiveness by claiming his star items as "Mine" and thumping them against my chest.   So I claimed the bucket as "Mine" and proceed with the rest of the funeral arrangements.

When I got back, Brut was sniffing the spot where the squirrel had been, I stood on the spot and claimed "Mine" then made him sit and lay down.  Click and reward.  By then another squirrel had caught his attention and I let the rest of the dogs out.  I didn't let Brut guard The Spot, I took it.  Then made him lay down again.  I kept his interest, while keeping an eye on the other dogs.  There were no fights, not even a hint of starting one.  I couldn't believe my eyes.

Today's operation last maybe ten minutes with about a twenty minute follow up when the other dogs were brought in.  Usually I'm a nervous wreck because I'm in fear of the dogs eating their prey.  Brut usually runs with his catch at every step I take and I will have to start over trying to get close to him.  This was simple and clean cut.  If that's all it takes is a fistful of treats to make him leave the squirrel so easy, than so be it.  I'll take it.  It was such a great positive experience with Brut and all the dogs that I feel ready for the next time.  Since the squirrels are busy packing for winter, there will be plenty of them next times. 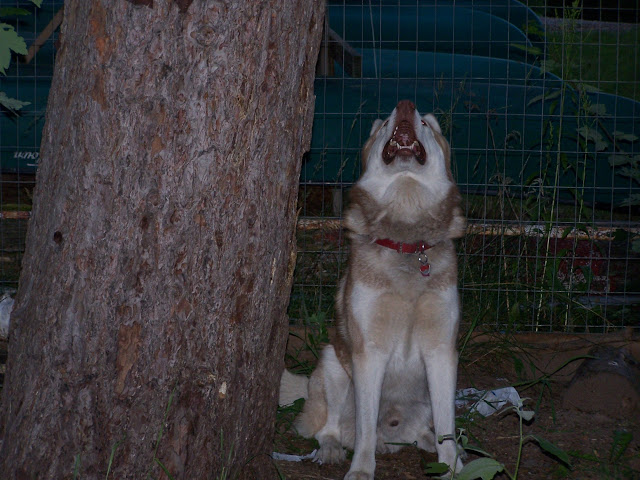 I'm watching you!
Posted by 24 Paws of Love at September 16, 2010
Email ThisBlogThis!Share to TwitterShare to FacebookShare to Pinterest
Labels: Back Dogs, Brut, dogs, squirrels

Squirrels are not very smart creatures are they? I'm glad that we don't have squirrels here!

Brut, great catch. Mom, good work. Mom says she will have to remember this the next time she finds Thunder with a bunny. Luckily we don't have very many squirrels around here - they would be very highly desired.

Brut is clever and quick! What a good catch!!!

Sounds like a bit of a complicated training moment but glad it worked out. Kelly loves to chase the squirrels here but she's never quick enough to get one!

The Army of Four said...

Viva also catched a squirrel some time ago that was so clumsy to fall out of a tree Viva choose as a resting spot. We managed (Viva is also resource guarding like Brut) to have her surrender her prey after a while with treats. Love the way you did it with the bucket and to claim the spot. Will also do that next time, if we encounter more unlucky squirrels.

Such vivid description made me feel like I witnessed the entire event. You did a great job establishing Pack Leader status!