TEAR DOWN THE WALL!! 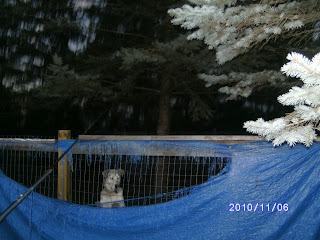 Blaze watching the Back Dog action

There is a double fence that divides the Front Dogs and Back Dogs yard.  A tarp covers the Front Dogs side for all of the dogs protection.  About three weeks ago we had a horrible wind storm that tore the top part of the tarp down, leaving some exposure between the two packs of dogs.  We decided to leave the large hole in the tarp and let nature take it's course bringing it down.

Chance and Blaze are able to stand and see the Back Dogs happenings.  It has been a success.  A little barking and some taunting, then everyone goes their own way.  Right now I am impressed with the reactions I am seeing between the two.  It becomes another step in integration.  I had been thinking of making hole in the tarp, but never got around to doing it.  Instead Mother Nature did it for me!  She obviously thought we were ready.  So here we go...the next phase of the 24 Paws of Love!
Posted by 24 Paws of Love at November 23, 2010
Email ThisBlogThis!Share to TwitterShare to FacebookShare to Pinterest
Labels: Back Dogs, Front Dogs

Thank you so much for your thoughts about Mango's seizures and that helpful link. I read every word she wrote and am planning on visiting the links. There isn't anything BIG going on around here, so I am mulling over all the little details; opened a new bag of kibble on Sunday (but Dexter eats it too), lots of training lately (happy stress?), maybe the metacam he takes for his joints is having an effect (but it never did before). So many little variables to consider. Hopefully he'll be seizure free for a while now. WIth the holidays coming up, my vet is going to be hard to reach and I don't want to talk to the JV vet left in charge. Of course we have the Tufts Emergency room just a half hour drive away if we need it. I don't want that to happen, so I am thinking good thoughts.

Hope they get to be together soon!!!

Sounds like the universe is trying to unite your family!

Thats awesome they are handling it so well, just remember to take it slow and there is normally set backs. How cool would that be to have no tarp on the fenceline between them?! we are excited to see what happens!

One step on the journey... how exciting! Will be keeping my fingers crossed. :)

It's so great how things tend to work themselves out with very little human intervention.

That photo is adorable. He looks so curious. Which may or may not be a good thing, no doubt. ;-)

My dogness - dis is siberiffic news!!! We hope dat one day all 24 paws of love will be able to live together as one pack!

Awesome News! Here is hoping that 2011 brings they together as one big happy pack!
Have A wonderful Thanksgiving!

That's exciting! Keepin my paws crossed that in time they can all be reunited :)

I find sometimes that when I'm uncertain about the next step in a process or even resisting change -- oooh boy do I resist change! -- things like this happen a lot. Not the path I would have chosen, but just what I needed anyhow. Congrats on your next step. <3

I'm really glad to hear things went well with the hole in the tarp - I can only imagine how amazing it would be for your pups to become "integrated".